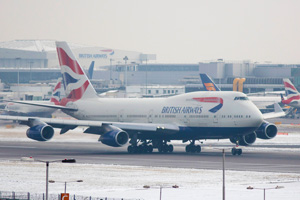 Heathrow managed marginal passenger growth in January despite a period of disruption from low visibility and snow.

The airport reported a 0.3% rise to a record 5.18 million passengers over the same month last year.

Domestic traffic slumped by almost 6% but European numbers were up by 1.8%.

Heathrow’s load factors – showing how full the average flight was – set a record for January at 70% – up 2.1 percentage points on January 2012.