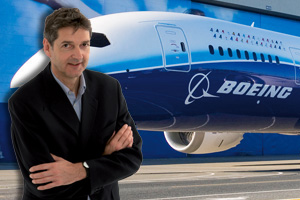 Much of the construction of Boeing’s Dreamliner took place outside of the US, prompting claims this led to the battery fault that caused its grounding. Ian Taylor reports

It’s taken a while for an acknowledgment of something obvious: the Boeing 787 will be grounded for some time.

Thomson Airways, due to take delivery of its first Dreamliner this month, understandably awaited confirmation from Boeing before announcing on Friday that it is preparing contingency plans in the event that delivery is postponed beyond March.

Boeing announced the same day: “We have informed customers expecting deliveries in the near term that aircraft either have been or are at risk of being delayed.”

That statement followed a US National Transportation Safety Board (NTSB) announcement that: “We’re probably weeks away from being able to tell people what happened and what needs to be changed.”

The 787 has been grounded since mid-January following a fire in a lithium-ion battery on a Japan Airlines Dreamliner parked at Boston.

Within days a second 787, operated by All Nippon Airways, made an emergency landing as warning systems suggested a similar fire.

The NTSB gave notice last week that the 787 would remain grounded pending revision of the regulatory approval process for the lithium batteries.

The assumptions which underpinned certification “must be reconsidered”, it said. That could necessitate major changes to the batteries or limit their use.

It led Boeing rival Airbus to confirm it is considering a return to traditional nickel-cadmium batteries in its new A350 which will compete with the 787.

The NTSB revealed the Japan Airlines fire began in one of eight cells in a battery.

It reported: “The cell showed multiple signs of short circuiting, leading to a runaway condition, which cascaded to other cells.

Luckily, the aircraft was on the ground and empty at the time.

NTSB chairman Deborah Hersman said investigators would now focus on the design and certification requirements of the battery system, since the batteries were certified to operate for more than 10 million hours without a “smoke incident” but had managed barely 100,000.

Potential causes of the short circuit “include battery charging, design and construction of the battery, and the possibility of defects” in manufacturing.

The NTSB promised an interim report within another 30 days, taking us into March. Lithium-ion batteries were chosen for the 787 because they are light and powerful.

They form a key part of an electrical system that contributes to the light weight and fuel efficiency of the aircraft by replacing the heavy hydraulic systems in use today.

The batteries could be replaced, but not without a trade-off in performance.

The affair has thrown up wider questions, not least in Japan where it has emerged safety regulations were eased to fast-track technology used in the 787.

It has been suggested this was, in part, because so many Japanese firms (65) supply parts for the 787. Indeed, 35% of the aircraft is made in Japan – including the batteries.

There is no suggestion this contributed to the problems and Japan’s Civil Aviation Bureau insists: “We have not brought down our standards in comparison to other countries.”

But the head of aviation at Japan’s Aerospace Exploration Agency told Reuters: “Ultimately, it [the revision] was a discussion of measures to lower operating costs for the airlines.”

The reason so much of the Dreamliner is made in Japan – and much more of it made elsewhere than the US – is that Boeing outsourced production: not just parts manufacture, but the design and manufacture of whole sections of the aircraft.

In fact, Boeing makes less than 40% of the 787. This complicates efforts to address today’s problems.

The New Yorker magazine reports a study of Boeing’s difficulties in working with its many “strategic partners” by two UCLA (University of California) researchers.

Herein lies the biggest reason why the aircraft was more than three years late entering service.

“We spent a lot more money trying to recover than we ever would if we’d tried to keep key technologies closer to home.”

In the rush to catch up, Boeing built Dreamliners before they were certified to fly – as the company has continued to do since the aircraft was grounded.

Industry analyst Richard Aboulafia told The New Yorker: “If the saying is check twice and build once, this was more build twice and check once.”

Remember this next time you hear someone singing the praises of outsourcing.

It’s a shame because the 787 is a magnificent piece of technology and I will happily fly on it again once it’s re-certified. I just wouldn’t bet on it flying for a while yet.