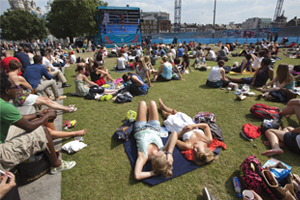 The return of the warmer weather could have an impact on sales during the end of the lates period.

Temperatures are expected to hit around 30°C with settled conditions set to last into the Bank Holiday weekend.

It will be the second time this year the UK has enjoyed an extended run of hot weather; during the initial period, On Holiday Group chief executive Steve Endacott claimed sales in the online sector had slumped by 20%.

He said the heatwave was as marked a decline as that seen during the Icelandic ash cloud crisis of 2010.

He added that the impact from the heatwave had been “a bit of a shock”.

However, Endacott said he was optimistic about sales during the upcoming hot weather.

“The warmer weather could have an impact but I think the combination of low prices and the fact that September is mostly for an adult market means we are likely to be okay during this period.

“I’d like to think the majority of adults go away for more than just the weather; it’s about the relaxation too. I’m more optimistic because of these factors.

“When we had the first lot of warmer weather we were smack in the middle of the period of family bookings and most parents took the decision to stay at home and have the kids in the garden.

“Fingers crossed this time round the weather won’t have the same effect.”

Travel agent consortium Advantage concurred with Endacott’s views of the difficultly experienced during the last period of warm weather, while Travel Counsellors claimed they had seen an increase in bookings despite the warm conditions.

Last month saw the country bake in the longest heatwave since 1976, with temperatures hitting 27°C or more for 19 days.

Forecasters have said the expected hot weather could even continue into September, with parts of the UK expected to be very humid.