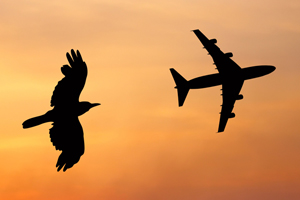 The number of bird strikes at Britain’s airports has nearly doubled in recent years, according to the CAA.

However, the increased number reflects more vigorous reporting rules which have been put in place.

More pilots are also reporting damage to their aircraft from the bird strikes. In two cases, pilots had to issue Mayday calls.