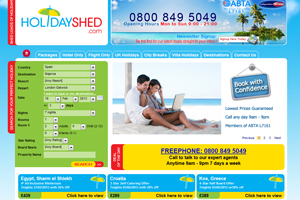 Online agency Holidayshed is among the creditors of failed flight broker Meridian Aviation UK. The company ceased trading in August and was due to enter liquidation on Wednesday this week.

An Abta member, Holidayshed had been trading since May 2009. It was run by Nicola Morris and her father Robert Taylor.

However, the company was taken over by Meridian Aviation in 2010 when Phil Wyatt’s brother Jim became a director and the trading address switched to that of other Wyatt companies, The Beehive at Gatwick.

Jim Wyatt resigned as director last year. However, the connections go further. Meridian Aviation commercial director Neil Morris shares the same address as Nicola Morris. He is the former managing director of XL Leisure and worked with Wyatt in the 1990s. Neil Morris is also the director of new flight broker Aviation Days Ltd, set up in July as Meridian prepared for liquidation.

No one from Holidayshed was available for comment. However, Abta head of financial protection John de Vial said: “We knew Holidayshed’s parent company was Meridian.

“Obviously there were reasons to keep an eye. [But] Holidayshed was not a member with any bad history. It was still under the day-to-day control of the existing directors. The Abta membership committee reviews these things. Whenever we see a change of control we take a careful look. We were satisfied with the two directors and with the bonding. We were happy with the arrangements in place.”

De Vial added: “There is no indication of anything problematic. It looks like Holidayshed was well within its bond. Our initial information suggests a low level of claims.”