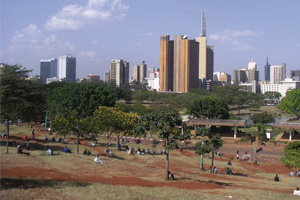 Kenya has sought to assure prospective tourists that the country is safe despite the ongoing Nairobi shopping centre massacre in which almost 70 people have been killed and 170 injured.

Three British people have been confirmed as being among the dead.

The Foreign & Commonwealth Office said the number of Britons confirmed as killed is likely to rise as further information becomes available.

Foreign secretary William Hague chaired a meeting of the government’s crisis committee over the weekend and a helpline was set up at +44 20 7008 0000.

A rapid deployment team flew from London to Nairobi to provide further consular support. Staff from Addis Ababa have also been sent to Nairobi to assist.

The FCO amended its travel advice on Saturday to include details of the attack but did not change it level of advice on travel to Kenya.

The FCO said: “The incident is still ongoing, with reports of a number of casualties and hostages. Armed Kenyan security forces are on the scene. We advise British nationals to avoid the area and exercise extreme caution.”

As many as 15 attackers – thought to be militants from the Somali al-Shabab movement – were still inside the Westgate shopping centre in the Westlands district of the Kenyan capital this morning.

Kenya’s commerce and tourism secretary Phyllis Kandie last night described the attack as a “despicable act of cowardice intended to instil fear among Kenyans and our visitors”.

Kandle said: “We are hereby therefore affirming that normal activities are going on in all parts of the country despite this grave and enormous challenge.

“We wish to assure tourists that Kenya is peaceful and our security agencies are doing everything possible to ensure that everyone is safe. Visitors are thus welcome to visit all our tourist facilities across the country which are operating normally.

“Tour operators and travel agents have confirmed that tourism activities continue uninterrupted. The government has also scaled up security in other social places across the country.”

Two conferences, the Africa Hotel and Investment Forum and the Eco Tourism and Sustainable Tourism Conference, are still expected to go ahead in Nairobi this week.