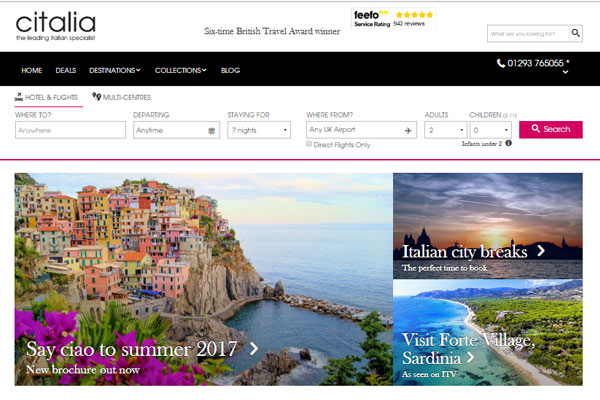 Tui-owned Italian specialist Citalia has ditched discounts for direct customers believing it will encourage more agents to sell its holidays.

The operator has also started offering flights with Ryanair, expanding its range of regional departures, and completed migration to a new technology platform.

To celebrate the 2017 brochure launch, reps will visit 111 agency stores and head offices over four days this week with its Citalia Prosecco Bike to thank agents for their support.

Agents who make a booking in October will also receive a bottle of Prosecco as a thank you.

Susan Allan, head of trade sales, said Citalia’s move to price parity and expanded trade sales team of eight, including newly appointed Rachel Stevenson and Kevin Russell, was a sign of its commitment.

“The move to price parity has been driven by that team,” she said. “One of the sticking points was we had differential pricing in the marketplace.

“Price parity has been a hot topic for a couple of years now. Our team on the road has phenomenal relationships but it was a barrier, so we’re delighted to give this commitment.”

Allan believes sales through supportive agents were not affected by differential pricing, but it did discourage other agents from promoting Citalia.

To achieve price parity, trade prices have been reduced to wipe out the 3% direct discount Citalia previously offered.

Citalia has taken the decision separately from the other brands in Tui’s Travelopia specialist division, which has been put up for sale.

Allan said she expected other brands in the group would follow suit as they look to enhance trade relations.

Citalia hopes offering Ryanair flying will expand its reach outside of its core market in the southeast, particularly in Scotland.

A ‘how-to’ video has been produced for agents on its new technology, developed by German firm Peakwork and already used by Hayes and Jarvis, which Citalia claims is the most advanced in the market.

Citalia’s new brochure features the biggest increase in its programme in its 87-year history, with 15% more product in both popular destinations and lesser well known regions.