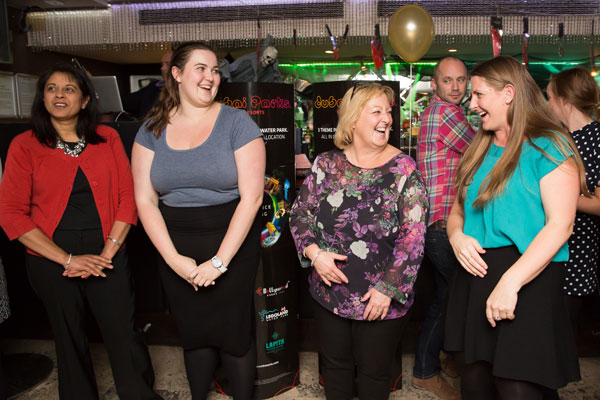 Two agents bagged all-expenses-paid trips to Dubai, with flights as Dubai Parks and Resorts celebrated the opening of the Middle East’s first Legoland.

Legoland, which opened alongside Riverland, is one of a new complex of four theme parks in Dubai’s with more than 100 rides between them.

The Emirates destination is hoping to overtake Florida as the family theme park capital of the world with the new attractions, which will be followed by a Bollywood theme park and Dubai Motiongate before the end of the year.

Agents were invited to the birthday party-themed evening in London on the same day as Legoland – the first of the attractions to be completed – opened its doors to customers.

The lucky winners on the night were Jackie Prats from Co-Operative Personal Travel Advisors in Chingford and Annette Beckford, a London-based homeworker and group specialist working for Global Getaways.

Jackie Prats said: “I’m absolutely over the moon. I’ve been to Dubai once before but it was 12 years ago.  I do sell Dubai but going there will make a lot of difference. There’s nothing like going to a destination to be able to sell it.” She’ll be taking one of her four children.

Annette Beckford said: “I can’t believe it. I’ve never been to Dubai before and I’ve sold a few trips there so it’s nice to be able to go.

“When you go to destinations you can pinpoint a customer’s needs and make sure it’s suitable for them. As a homeworker I have a very personal relationship with my clients.”

The winners were among the eight finalists who played a Deal or No Deal-style game after winning a series of challenges throughout the night.

Two of nine envelopes had a pair of tickets to Dubai inside while the others had either £100 of Love2Shop vouchers or a Dubai Parks goody bag.

To qualify for the final round and win one of the nine prizes on offer, the dozens of agents in attendance at Blue Ruby in London’s Leicester Square had to win a series of games which included making dogs out of balloons, finding hidden tickets and guessing whether some of Dubai’s landmarks – including the 829.8m-high Burj Khalifa – were higher or lower than a given number.

He said: “The story of Dubai is very well known. Fifty years ago it was nothing, now millions of tourists visit every year, including 1.4 million from the UK.

“Today (Monday) is a really important day for Dubai. It will go down in history as the day Legoland opened and the first day of a new chapter. For people who have never been to Dubai, it’s another reason to go and all those theme parks you sell in Florida – you can now get that in Dubai too.”

Catherine Lamri, from Dubai Tourism, told the audience: “Dubai is already known as a fantastic family destination but all these park openings are really exciting  and add to all the other great attractions already there.”

Emirates also used the night to announce it will be introducing flights from £300 to the Emirate in the coming months.