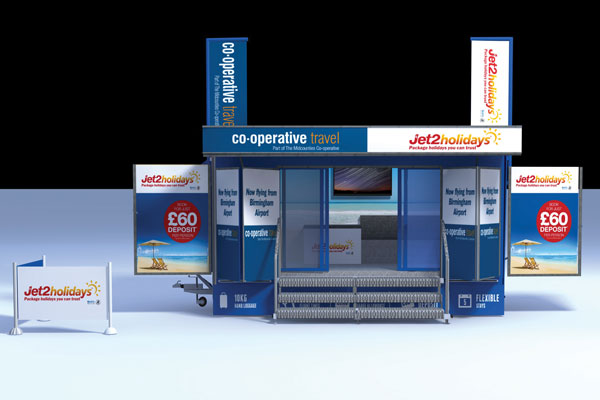 Jet2holidays is launching a mobile travel agency initiative in January to “get agents out of the high street and into their communities”.

The package tour operator, which recently announced new flights and holidays from Birmingham and Stansted for 2017 in addition to its northern bases, has invested in two five‑metre trailers to be used as mobile travel agencies.

Member of its 10-strong sales team are undergoing a three-day training course to “beef up their driving licences”. They are learning how to drive with the trailers, which can be co-branded with partner independent agencies and parked in places of high footfall or at community events.

The initiative will kick off with Midcounties for two weeks in January. The two co-branded trailers will be driven to Co-op food store car parks in the Birmingham airport catchment area.

Jet2holidays will then partner with Hays, Dawson & Sanderson and Stewart Travel to take its trailers into their communities – and it would like to hear from other independents who would like to make use of the trailers.

Jet2holidays sales director Alan Cross said the trailers have Wi-Fi and heating and are an appealing place for customers to come and book a holiday.

He said: “This is an imaginative idea that will get agents out of their high streets and into the heart of their communities, and we want to hear from anyone who would like to partner with us to take a trailer for a day or more.

“We will sort out all the co‑branding and park the trailer wherever the agent has identified as a good place, and our sales representatives will be on hand to help sell the holidays alongside our agent partners. It’s really exciting,” he said.

Cross revealed he was recruiting for a second sales rep to cover the Stansted catchment area following “huge demand” for holidays from the airport.