A peaceful and safe week in Portugal was brought to a chaotic end by the government’s green list U-turn, says Tate’s Travel owner Lee Tate

On Sunday (June 6) I returned from an amazing week in the Algarve with my wife and two kids. My wife and I have both had our first and second vaccinations and between the four of us, we paid £240 for our Covid tests (heavily subsidised by Tui) and we will have taken a total of 12 tests by this Tuesday (June 8). That said, we didn’t mind following all protocols to ensure that we (and others) had a safe week in the sun during school half-term.

We stayed in Lagos which was both beautiful and half-deserted. The beaches and coastline were absolutely stunning. Eating outside in restaurants was very nice but quiet. We spent seven days with the kids playing in the pool or enjoying the tranquil beaches. However, upon reading the UK news, I was shocked to see the crammed UK beaches back at home (in Blackpool and Bournemouth). What a comparison to the quiet and socially-distanced beaches of the Algarve! I feel that it is totally safe and acceptable to holiday overseas. 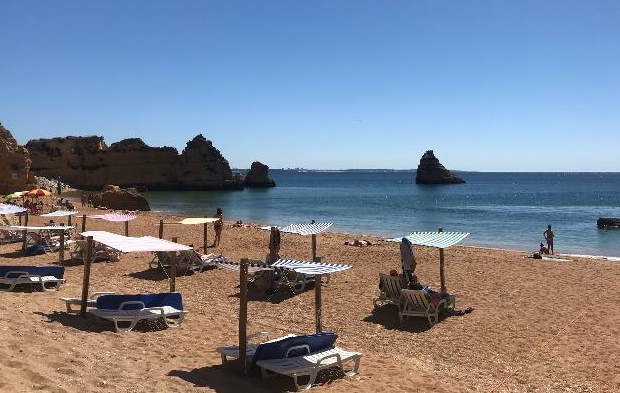 A quiet beach in Lagos

As an owner of an independent travel agency for over 25 years, I always chat with fellow holidaymakers – not only to socialise but also to sense the mood – and never more so than during the past 15 months. The general feedback was grudging acceptance of the hugely over-cautious approach to the releasing of international travel – whilst at the same time being grateful that holidaymakers were able to travel anywhere at all!

Those I spoke to were generally accepting of the huge amount of admin and time required to complete Passenger Locator Forms in both directions as well as taking two PCR tests and one lateral flow test per person in order to have the “freedom” to travel.

Holidaymakers were enjoying their safely distanced holidays and the new arrivals had just settled by the hotel pool on Thursday afternoon when the rumours began – and were soon confirmed – that Portugal was to be removed from the green list with just over four days’ notice. This is in total contrast to the government’s previous assurances of a two-week “watch list” before the status of overseas countries would be changed.

The new arrivals were devastated, having just transferred in from Faro Airport. Some immediately began looking for flights back to the UK in order to beat the upcoming deadline of this Tuesday (June 8). There was genuine anger and incomprehension at the mis-handling of the situation by our wayward government. It seems that prime minister Vallance and health secretary Whitty, who are both currently running our country, are under-qualified to advise on anything apart from the scientific challenges we are facing.

Unfortunately, they seem to have overall say as to policy making decisions in our country whilst their aides, Messrs Johnson, Hancock, Shapps et al, no longer have any decision-making powers as to the implications of these “minimise Covid cases and to hell with everything else” policies.

Anyway, I digress. Getting back to the lovely holiday in Portugal with my wife and two sons – after the sudden announcement changing the status from green to amber, we enjoyed our final three days in beautiful Lagos. We took our Covid tests within three days of departure, filled in our Passenger Locator Forms and checked in online – it’s not all relaxation going on holiday anymore!

On Saturday we started to see images of the carnage at Faro airport as the mad scramble for flights home was well underway. We were therefore unsurprised when we arrived on Sunday morning to see the queues for the Tui and EasyJet check-ins snaking around the airport, outside the terminal building and around the car parks (in 25-degree heat). 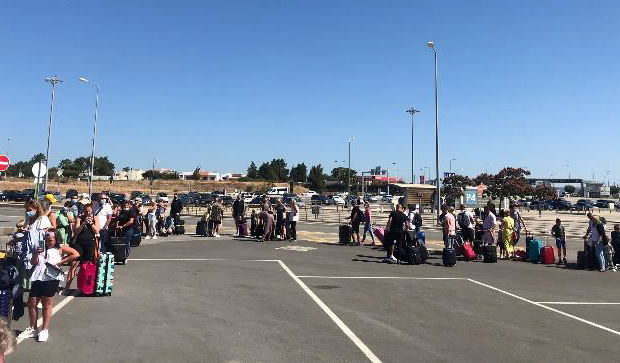 Families with young children were becoming increasingly stressed and some more elderly passengers struggled in the heat, some whilst trying to complete their Passenger Locator forms whilst in the queue! How the older generation are supposed to travel anywhere with the increasing need to fill in online forms is a mystery to me!

After two-and-a-half hours queuing to check in – absolutely no fault of the Tui staff who were doing their best in very testing circumstances – we moved on to security and then endured a further one-hour queue at passport control. We finally boarded our flight around two hours late, having queued almost continuously for almost four hours in total. The elderly, disabled and families with babies and toddlers were really feeling the strain by now.

We finally took off and arrived back at Newcastle Airport where Passport Control did a great job to get everyone through quickly. Unfortunately, the ever-woeful Swissport ground handling crew took an hour from touchdown to getting the first suitcase onto the baggage carousel. But that’s a story for another day!

In summary, whilst myself and almost everyone I spoke to are aware of the unprecedented situation we are living through, the consensus is that the government’s promises of the very-successful vaccination program have led to nothing like the release of freedoms we were advised would have come to fruition by now.

We simply cannot lock down travel and destroy the lives, livelihoods and freedoms of the general public every time a new variant is discovered, otherwise this crazy locking and unlocking of travel restrictions will be with us forever. Is it not enough to evidence being Covid-free before, during and after a holiday? Countries and islands with incredibly low cases are still unavailable for leisure travel despite our nation having incredibly high vaccination levels, begging the question as to why we are going to the expense of vaccinating everyone?

The travel industry is already on its knees and this “playing God” with everyone’s travel plans has absolutely destroyed consumer confidence in booking overseas holidays. Whenever another country is declared to be on the green list, nobody will have the confidence to book to travel anywhere for fear of yet again being lied to by the government and left scrambling to return home before punitive restrictions come into play.

The clear lies about the traffic light warning window led many people I spoke to this week to say they are now ready and willing to go on holiday to amber list countries this summer and flout the quarantine rules on their return. And you know what? I think I might be starting to agree with them!