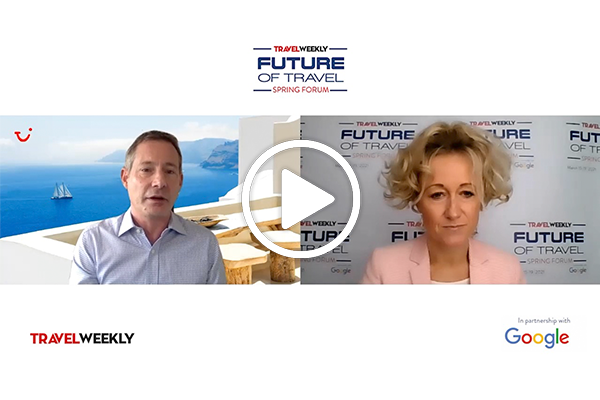 Tui’s UK boss Andrew Flintham says the trade can be “rightfully optimistic” about a “significant” summer season this year.

The UK’s largest operator is “ready to go” from May 17 and is considering an extension of this summer’s programme into the shoulder months if there is demand.

Speaking at Travel Weekly’s  Future of Travel Spring Forum, Flintham acknowledged the restart might not be immediate and that the industry would have to deal with “some complexity and changes”.

But he reported “genuine customer demand” and “hope” since the prime minister gave his roadmap for overseas travel on February 22.

He said: “We saw the immediate response of customers. I think everybody in the industry did.

“Will the restart be on May 17, a week later, two weeks later? To use government language, who knows?

“But there is now a really strong impression there will be a summer, hopefully a significant summer, so I think we can be rightfully optimistic, while recognising it might not be as plain sailing as we would like.”

Flintham called for alignment between Foreign Office advice and travel corridors when travel resumes, and for travel certification to be “as broad as it possibly can”.

He predicted Greece, Cyprus, Spain and Turkey would be among the first to reopen to UK holidaymakers, and that this would prompt pressure from other destinations to follow suit.

“You will start to see a snowballing of optimism,” he said.

With that in mind, Flintham is hopeful the UK market can replicate the Tui group’s aspiration to operate at 80% of its usual capacity in the peak season.

He said: “As a group we are trying to do about 80% of what you would see in the peak months. We will clearly will be starting with a slower start-up than we’d normally have. I think it’s a reasonable aspiration.

“In those peak dates we would like to be operating at close to those kind of levels. Whether we will be able to is clearly the unknown, but we have the aspiration and able to run at those levels.”

The “massive peak” in enquiries and sales which followed the roadmap announcement had now settled at a “good level” of sustained demand, said Flintham, with many of those booked to travel in May now switching departures to later this summer, winter or 2022.

Flintham added that if demand for September and October continued at similar levels, Tui could offer a “longer run” of holidays beyond the usual end of the summer season.

“Clearly that demand could carry on through what would normally be our shoulder months,” he said. “We could see some different demand profiles. We are looking at extended seasons. We’ve got a lot of flexibility to extend if the demand is there.”

He dismissed price hikes as unlikely despite increased demand.

“We want to get customers back,” he added. “There’s an awful lot of capacity in the system that everybody has to offer, so we won’t necessarily see rampant price rises in the near term.”

Flintham said he was “fairly confident” of a strong bounce-back for holidays in 2022, potentially returning to the operator’s capacity levels of 2019 or even “above that”.

“We can clearly deliver if the demand is there,” he said, but cautioned: “The one thing I’d say is the last 12 months have proved to me that the crystal ball we thought we had hasn’t really worked that well.”