P&O Cruises has revealed what SkyDome on its Iona ship will look like in rendered images released to the world on Friday (August 24).

The two-deck SkyDome will include a swimming pool that transforms into a stage at night, as well as a glass dome roof that will provide a temperate climate for guests.

During the day, SkyDome on decks 16 and 17 will be filled with sun loungers, reclining chairs, greenery and artworks.

At night, the space will become an entertainment venue on the 5,200-passenger Iona, due to launch in May 2020. 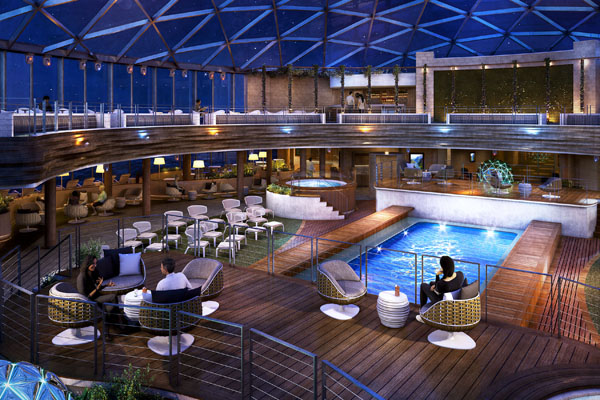 P&O Cruises senior vice president Paul Ludlow said: “SkyDome promises to be one of Iona’s star attractions, providing guests with a magical venue in which to spend quality time whatever the weather.

“With stunning views of the ocean by day and of starry skies at night, I’m confident that this extraordinary venue will prove popular with our guests.

“SkyDome will raise the bar for entertainment spaces at sea.”

Iona is being built at the Meyer Werft shipyard in Papenburg, Germany.

Travel agents back Abta’s call to persist on grant funding