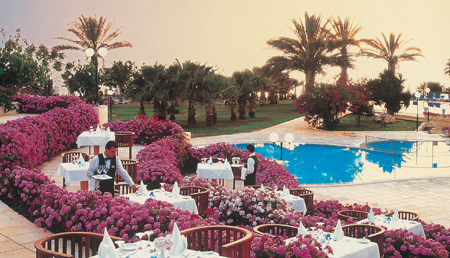 While accommodation in some European countries doesn’t always live up to UK standards, Cyprus is a class act. Luxury spa resorts, boutique properties and upmarket villas with pools have replaced a glut of mid-market hotels.

The island was recently awarded its highest ever number of Blue Flag beaches – 53 in total – and rated top spot in Europe for bathing water by the European Commission and European Environmental Agency Commission.

Cyprus Tourism Organisation director Orestis Rossides says: “Cyprus has always offered a quality product. In recent years, the choice of upmarket hotels has increased, both in the five-star category and with new boutique hotels.

“There is a continual programme of investment by hotels to improve their facilities, particularly with the introduction of state-of-the-art spas. By November, we will have two revamped modern airports, which will improve accessibility, and the combination of year-round sunshine, luxury accommodation, a modern infrastructure, varied landscape and attractions makes the island an appealing choice for upmarket visitors.”

When clients want to splash out, they are spoilt for choice. The five-star Aphrodite Hills Resort, overlooking Paphos, is featured by many operators, and is a favourite for visitors who want to combine sun, spa and sports with upmarket relaxation.

The Four Seasons, Limassol, has a host of family-friendly facilities and pampering treats to keep parents and children happy. It was the first to offer thalassotherapy, still available in a brand new thalassotherapy centre, and now has the exclusive Shiseido Spa, the only one in the entire Mediterranean region.

Londa Hotel, outside Paphos, is self-styled as the island’s first couture hotel, and features the gourmet Le Caprice restaurant. Another example of a boutique property is the beachside Azia Resort, divided into three sections to satisfy the tastes of discerning guests. Azia Blue has spacious, luxurious rooms; the Azia Club and Spa is ideal for privacy; and The Residence is a haven for individual pampering.

The spas of Cyprus can soothe the most stressed-out clients. The new Amathus Spa and Wellness Centre in Limassol combines the four elements of air, earth, fire and water to create a sophisticated, tranquil ambiance.

In Paphos, Thalassa Boutique Hotel‘s Anagenisis spa was the first holistic spa in Cyprus and has launched a treatment menu designed for mothers to be. These include a body wrap that can safely be used by pregnant women, the first of its kind in Europe.

On the food front, the hotel’s new head chef is Shuki Salem, who has worked at Michelin-starred restaurants including London’s L’Oranger and The Ivy.

The focal point of Le Spa, at Le Méridien Limassol Spa and Resort, is the indoor and outdoor thalassotherapy centre, billed as the only one of its kind in Europe. It includes four outdoor and three indoor mosaic-tiled seawater pools.

Cyprus is gaining popularity as a golf destination, and the Secret Valley Golf Course is one of the most scenic places to play.

A new championship golf course, already earmarked for the PGA’s European Tour, is being built in the hills above the original course. The current course is also being completely remodelled, and another 18-hole course, designed by Nick Faldo, constructed alongside.

If tennis is your clients’ game, Aphrodite Hills Resort has launched an academy providing Olympic-standard facilities. It provides one-to-one coaching or group sessions, and a 600-seat stadium court is being built this year.

Operators such as Headwater offer independent cycling and walking holidays to the lesser-known beach and mountainous regions of Cyprus. Hotels are hand-picked for their good food, routes are mapped out, and luggage is transferred from place to place, so clients can simply enjoy exploring the island.

After all that activity, wine buffs can follow one of the island’s six wine routes taking in vineyards, boutique wineries and wine-producing monasteries.

Take a chance on me

Finally, when it’s time to say ‘I do’, couples can take their pick from two new wedding packages at the Aphrodite Hills Resort. The Mamma Mia Mediterranean wedding, from around £160 per person, includes a live band playing songs from the musical.

For a more traditional marriage, the Cypriot wedding package, from £125 per person, includes an afternoon of entertainment with local folk dancers and a sumptuous Cypriot buffet.

Constantinou Bros is remodelling its three-star Paphos property into the town’s first all-suite, adult-only luxury boutique hotel. Paphian Bay Hotel will become the five-star Asimina Suites Hotel, with 120 suites, including several with private plunge pools and garden areas. It is scheduled to open in April 2010.

Opened in May, Ayii Anargyri Natural Healing Spa is Cyprus’s newest spa. It is situated next to Miliou’s healing springs in the heart of the Nerades valley.

Set on the edge of the proposed Akamas nature reserve, The Anassa’s refurbished Thalassa Spa has reopened after an extensive redesign. The spa offers the Organic Pharmacy’s 100% natural product line and natural treatments using local produce.