Laura French gets under the skin of Cuba on one of Intrepid Travel’s new 18 to 29s tours.

“Do you like the 1975?,” asks Ivan, as he scrolls through his iPhone, showing me a list of British bands he seems to know more about than me.

“And have you seen The Crown?”

I’m sitting with a group of newly-made Cuban friends, drinking mojitos on a sunny terrace at Fabrica de Arte Cubano (FAC), a factory turned nightclub and arts space in Havana that houses exhibitions, bars and a dance floor. It’s filled with denim-jacketed hipsters, well-preened locals and famous Cuban artists, plus petite, fancy-looking dishes that bear little resemblance to the rice, beans and meat combo I’ve heard so much about.

In fact, bar the mojito in my hand, it all seems a little incongruous with the things you normally hear about Cuba – that the internet is barely existent (Netflix?), that salaries average $30 a month (iPhone?), that everything here is stuck in the past (hipster club?).

It turns out many of these things actually are true – there are just ways around them. Ivan says he got the Netflix goods on a hard drive from someone’s house, while one of the girls tells me salaries (about $30 a month for state-run jobs) can be multiplied twentyfold in tourism thanks to tips; her boyfriend quit his job as a lawyer because he could make more money washing cars.

It’s one of several intriguing details I learn – like the fact there are two currencies, that Cubans get ration booklets, that most people don’t own cars and that barely anyone has Wi-Fi – as we travel around the country on one of Intrepid Travel’s new 18 to 29s tours, exploring the famous ‘triangle’ of Havana, Trinidad and Viñales.

And as we explore these three very different regions I see so many contrasting sides to the country it’s hard to sum it all up – classic cars and crumbling buildings, tranquil countryside and traditional horse-drawn carts, cobblestone streets and colourful mansions – all without a single chain restaurant or American brand name in sight. There’s plenty to sell to travellers of all ages here  – but where do you start? 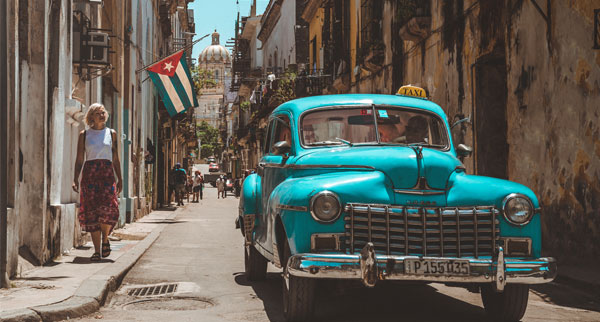 Like much of Cuba, Havana is all about the paradoxes – opulent, dilapidated, chaotic, sensual, colourful and creative all at once. In the old quarter there are grand, historic squares such as the Plaza Vieja – framed with lemon-yellow buildings and elegant restaurants set on shiny cobbled patios – and ornate structures such as the national theatre, a baroque-style palace that wouldn’t look out of place in Paris.

But there are also rough-and-ready streets, where half-destroyed cement houses crumble into the roadside and iron bars barricade the doors, candy-hued vintage cars sitting out front like something from a 1950s film set.

We explored all of it on a tour of Old Havana on the first morning, and on our return a week later, whizzed along the Malecón (the seafront promenade) in an open-top Chevrolet.

But my highlight was the nightlife, with spots such as King Bar and FAC luring a young, cool crowd with salsa, techno and other music, plus guitarists in pretty much every restaurant you come across in the buzzing, atmospheric old quarter. 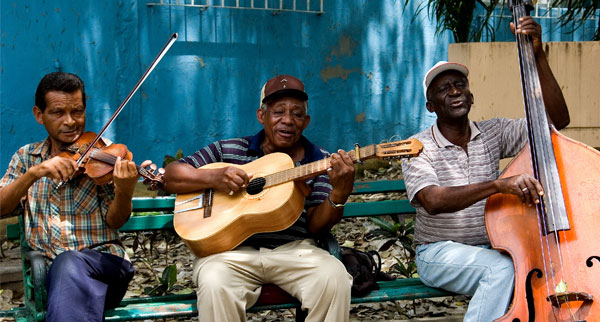 It wasn’t only Havana that impressed with its nightlife; just as lively was Trinidad, our next stop on the tour, around four hours east of the capital.

This elegant colonial town was one of the wealthiest spots in the country in the 19th century thanks to its sugarcane industry. Today, its Spanish-built, frescoed mansions remain, brushing against neat cobbled plazas, pastel-coloured churches and perfectly-manicured casas in turquoise, pink, green and other striking hues.

It has a distinctly different, more laid-back feel compared to Havana, with rooftop bars and restaurants lining tranquil, labyrinthine streets, and horse-drawn carts jolting around. But music is still its heart and soul; live bands play on street corners throughout the day, and salsa dancers perform on the outdoor steps by the main square every night. Afterwards, the crowds pile off to La Cueva – a 3,000-capacity club built in an underground cave, where acrobats perform among stalactites and stalagmites illuminated in purplish lights (spectacular, if a little peculiar).

The tour gave us free time to do as we pleased – a good selling point for younger travellers who want to do their own thing – so several of us opted for a trip to El Cubano National Park the following day. From here, we trekked through lush-green forest and dangling vines to reach the Javira waterfall – a glittering plume of water that comes crashing into a deep-green, lagoon-like pool below – before hopping over to nearby Playa Ancon, a cut-off beach that’s as Caribbean as it gets – all blindingly bright, chalky-white sand and a long strip of turquoise that looks more Photoshop than reality. 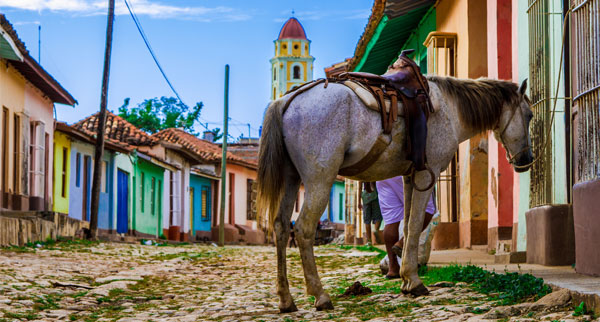 But the real standout on the nature front was Viñales, a small town in the rural, northwesterly Pinar del Rio region, where the majority of the country’s tobacco is grown.

Here copper-coloured dirt tracks, purple lavender fields and leafy tobacco plantations sit beside huge mogotes (limestone rock formations) rising in bizarre, hump-shaped bulges, and locals in cowboy hats gallop around on horseback (since cars are notoriously expensive in Cuba – some upwards of $50,000 – horse and cart is still the primary mode of transport across much of the country).

We explored its smattering of farmhouses on foot on an optional coffee and tobacco farm tour. Head of the farm Fernando showed us how cigars are made – from selecting and drying the leaves to hand-rolling them into a stuffed, plump cylinder – before serving us a freshly-made mojito in silent, peaceful surrounds that made the noise and chaos of Havana seem nothing more than a distant dream.

We also checked out Cueva del Indio – an underground cave and former indigenous dwelling, where a boat takes you along a pitch-black river beneath a canopy of marbled, multi-coloured rocks.

The highlight for me was experiencing the town’s weekly fiesta. Every Saturday night, the street by the main square turns into one giant party, with locals from the valley coming to sway along to salsa and other Cuban beats, mojitos on tap, churros stands filling the air with the smell of sweet, deep-fried indulgence.

It gave me a proper taste of local life – the type of place where everyone knew each other – and it seemed a world away from FAC and its cosmopolitan, iPhone-flashing vibe.

But that’s what really got me hooked on Cuba – the contrasts between old and new, the feeling that you’re stepping back in time but also witnessing a country that appears to be on the brink of change. Stereotypes and cliches around this place abound – some true, some less so – but the only way to really understand it is to go there yourself. Even then, you probably won’t get to grips with it, but that’s all part of the charm of this elusive, often paradoxical, place.

Che Guevara’s Mausoleum, Santa Clara: It was in the small city of Santa Clara that Che Guevara – the iconic Argentinian revolutionary, appointed by Fidel Castro with the aim of establishing communism in Cuba – overthrew authoritarian ruler Fulgencio Batista in 1958. Today Guevara and 29 revolutionaries are buried here, with letters, firearms and more teaching visitors about his life.

Bay of Pigs: The American CIA sent 1,400 soldiers to overthrow Fidel Castro and his left-wing ideologies here in 1961 – it failed, dampening relations between the US and Cuba. It’s now a stretch of crystal-clear water that attracts divers and snorkellers and is well worth a quick stop on the way from Trinidad to Vinales. 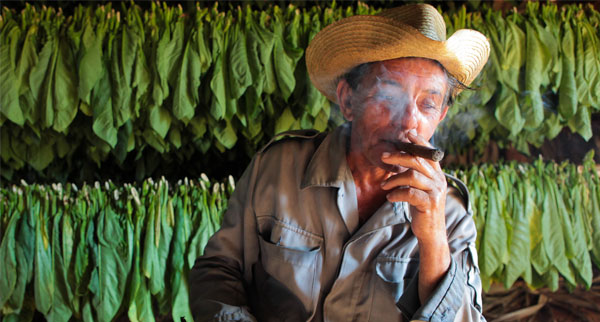 How to sell tours to millennials

“Intrepid Travel’s 18 to 29s product range launched in July 2018 following feedback from our youngest travellers, who wanted the option of travelling with people at a similar stage in life. Millennials were a key demographic fuelling our 17% global sales growth last year, with the UK seeing a 14% increase in departures from the 18 to 29 age group.

“These travellers are a diverse bunch, ranging from first-time to experienced travellers. Our top-selling destinations among the new range for the first half of this year are Morocco, Egypt, Turkey, Vietnam and Japan, with trip lengths ranging from five to 34 days.

“Overall, our 18 to 29s travellers are seeking a sustainable travel company, experiences that get them off the tourist trail, a great group of travel companions, good value for money and an experience they can make their own.”

Intrepid’s One Week in Cuba trip for 18 to 29s costs from £665 per person, including accommodation, transport and activities (excluding flights). intrepidtravel.com 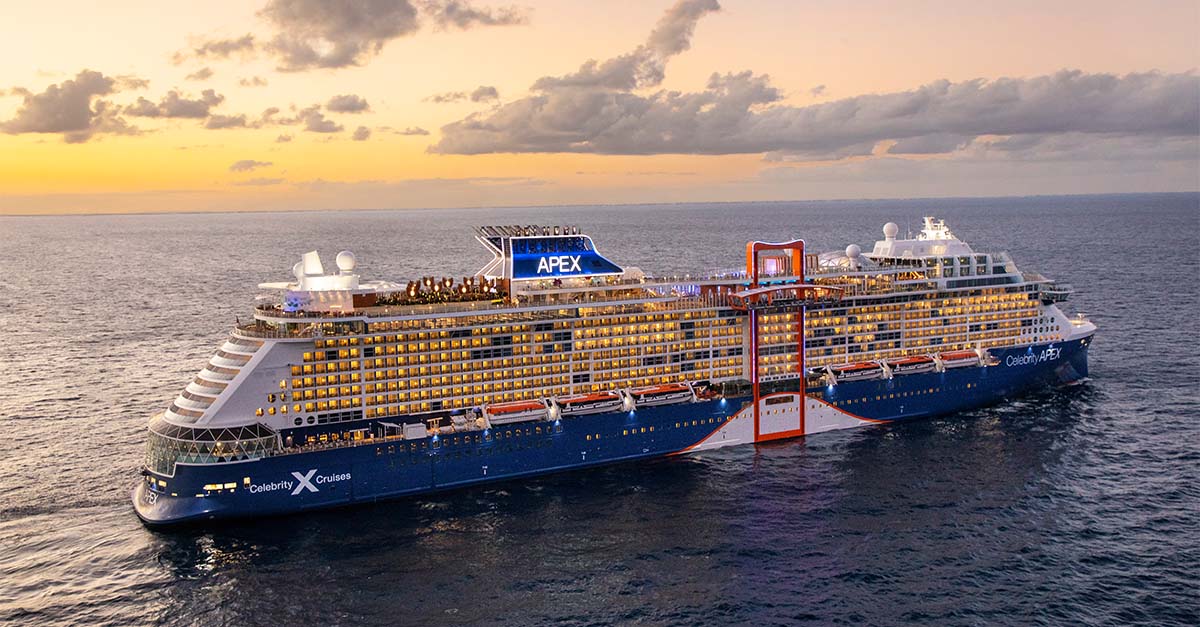