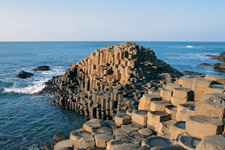 The first time I visited the Giant’s Causeway, the famous rock formation in County Antrim, Northern Ireland, was on a bright and bitterly cold January morning.

Unsurprisingly, there weren’t many fellow explorers to accompany me on the brisk walk to what has widely become regarded as the eighth wonder of the world.

The astonishing array of basalt columns that make up the causeway were named in the 1700s when 40,000 visitors first came to view them. Still hidden from view, the first thing I notice when I leave the well-equipped visitors’ centre is the silence.

The air is clean and crisp and the bright sun makes the grass gleam. The North Sea shimmers as the rays bounce off the breakers and the aqua-blue colour almost tempts me to take a dip before I think better of it.

The landscape around the site is magnificent with the headland falling hundreds of feet into the swell. This is a coastline full of castles and beautiful beaches – history and nature beautifully entwined.

Of course, I’m here to see one thing: the Giant’s Causeway, which, according to legend, was painstakingly created by a mythical giant.

The photographic opportunities are endless as the waves crash over the strangely angular rocks that seem to collect in huddles against the coastline. It perplexes and delights, and I feel privileged to witness it in such idyllic conditions.

For those with greater stamina than myself, a coastal path makes a fascinating hike towards the equally impressive Carrick-a-Rede rope bridge 12 miles away.

Inland, the Bushmills Distillery – the world’s oldest – promises a welcome respite for weary legs. It’s a combination of fascinating scenery and great hospitality.