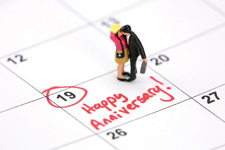 It’s important that couples keep the romance alive in their relationship once the sound of the wedding bells has faded away.

How better than to use their anniversary for a special holiday? Think of a break to suit their big day and target them with special offers at the right time of year.

Here are some suggestions for the first 10 anniversaries…

Charing Cross Road is heaven for bookworms. Though big chains have moved in, the area still has some of the romantic atmosphere captured in 84 Charing Cross Road, starring Anthony Hopkins and Anne Bancroft.

Look out for first-edition hardbacks of romantic poetry in the specialist shops. Foyles’ in-store cafe-come-record shop Ray’s Jazz is a great place to while away time, sipping coffee and listening to, er, jazz.

Stay at:Red Carnation Hotels has a selection of properties in the capital including the boutique Montague on the Gardens, a short stroll from Charing Cross Road.

Sample product: Rates start at £185 per room per night, plus VAT.

Egyptian cotton is the finest in the world so why not combine a cruise down the Nile with a shopping expedition to bring a touch of luxury to the marital bed?

Stay at: The five-star Sofitel Winter Palace in Luxor for one night followed by a cruise to Aswan on the Oberoi Zahra, one of the most luxurious vessels on the Nile with 26 suites, king-size beds, flat- screen TVs and wi-fi Internet access.

Sample product: Cadogan Holidays offers eight-day packages from £1,406 including flights, one night in Luxor and a seven-day cruise.

The perfect gift: Shoes and handbags

Where to go: Milan, fashion capital of the world, and, more specifically, Via Maffei, the home of Prada, for that must-have bag. For a truly romantic night out, get tickets for La Scala opera house.

Stay at:The Four Seasons hotel, converted from a 15th century monastery, has an enviable location on the Via Gesu, a stone’s throw from the designer shops.

Sample product: Kirker offers three- night packages including flights, transfers and accommodation at the Four Seasons with breakfast from £1,460 year-round.

Where to go: Tulips from Amsterdam really are the best in the world. Take a day trip to Keukenhof Park, which is a blaze of colour from late March to May when more than seven million flowers are in bloom. You can buy bulbs in Keukenhof or from the floating market on Singel Canal.

Stay at: The five-star Dylan, right on the Keizersgracht canal. Built in the 17th century, it’s an intimate hotel offering in-room spa treatments.

Sample product: Thomson Cities has three-night breaks from £435 per person, including flights, in March and April 2008.

The perfect gift: A sculpture

Where to go: Kenya.

Sugar-white beaches, warm blue seas and hideaway hotels makes this a perfect destination for loved-up couples who can pick up hand-carved wooden souvenirs at the markets or from traders on the beach.

Stay at:The Cove Luxury Tree Houses in south Mombasa, where six houses, complete with four-poster beds and open-air bathrooms, are built into Baobab trees alongside Kinondo beach. Visit the Akamba wood carvers in Mombasa where you can buy souvenirs such as wooden giraffes and masks.

Sample product: Somak has all-inclusive seven-day packages from £1,454, including flights, departing in March 2008.

Where to go: St Kitts.

Though the island stopped producing what used to be called ‘white gold’ in 2005, it is still possible to explore the plantations and some of the grand old houses, redolent of the colonial era, have been converted into boutique hotels.

Stay at:Ottley’s Plantation Inn at the foot of Mount Liamuiga, complete with the ruins of an old sugar boiling house, which has views over the sugar cane fields.

The perfect gift: A sheepskin rug

Where to go: New Zealand.

All those jokes about there being more sheep than people in the country are true, hence it is the largest producer of super-soft merino wool garments and you can pick up fabulous rugs and woollen clothes there.

Stay at: Tarzan and Jane types will love the South Island with its awesome views and high-adrenalin activities, such as white-water rafting, bungee jumping and glacier skiing.

Sample product: Virgin Holidays offers a seven-night Southern Glacier self-drive tour, taking in Christchurch and Mount Cook, from £1,598 per person, including flights departing from May to September 30 2008.

The perfect gift: A necklace

Where to go: Crete is closely associated with the Bronze Age and visitors can see a collection of Minoan treasures in Knossos, the island’s largest Bronze Age archaeological site. You can buy a replica bronze bee pendant and earrings, symbolic of the Minoan era, from gift shops on the island.

Stay at: The brand new Grecotel Amirandes in the resort of Gouves, which is only 15 minutes drive from Knossos. The hotel, which opened in 2007, has family suites with private pools for couples celebrating their anniversary with their children.

Sample product: Planet Holidays has seven-night packages with half-board accommodation in a superior room from £695, including flights departing in May or October 2008. Anniversary couples receive a free cake.

The art of pottery making was first developed on the island in ancient times and the art is still practised today in the picturesque villages of Phini, in the Troodos Mountains, and Kornos, near Larnaca, where potters turn the red clay from local hillsides into pots.

Stay at: The five-star Coral Beach in Paphos has its own arts and crafts centre where guests can pretend to be Patrick Swayze and Demi Moore at the potter’s wheel in Ghost.

Sample product: Libra Holidays offers seven nights’ bed and breakfast at Coral Beach from £416 per person, including flights from Gatwick, in March 2008.

Where to: Malaysia is one of the world’s top producers of tin and the capital Kuala Lumpur is a shopper’s paradise, so where else would you go to buy the latest phones and cameras which, like most electronic gadgets, uses tin coating?

Stay at: The Ritz-Carlton, Kuala Lumpur’s only boutique five-star hotel for a few nights, then continue on to the Four Seasons Resort in Langkawi, which has outdoor tubs, six spa pavilions and a pool overlooking the Andaman Sea.

Sample product: If Only offers three nights’ bed and breakfast in Kuala Lumpur followed by eight nights’ room-only in Langkawi from £1,815 including flights in June 2008.