Stay on top of Alaska’s coolest cruises with Jane Archer’s guide to sailing the state.

It’s more than twice the size of Texas, home to the tallest mountain in North America and a favourite cruise destination for clients keen to visit one of the last great wildernesses on Earth.

If you are thinking Alaska, give yourself a pat on the back. And if you can name the two anniversaries the state is celebrating this year, go to the top of the class.

The first is 150 years since US president Andrew Johnson bought Alaska from Russia for $7.2 million. It was known as a department, district and territory before becoming the 49th state in the Union in 1959.

The second – that it is 70 years since Holland America Line launched cruises there – is more obscure but a good hook for agents looking to push cruises to Alaska. The company now has a massive operation there – it has its cruises, of course, but the company also owns the glass-domed McKinley Explorer train and McKinley Chalet Resort so it can combine land and sea holidays. 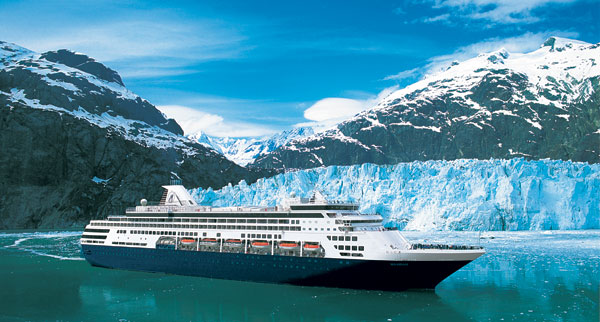 To celebrate its 70th anniversary, Holland America has more capacity than ever in the region with seven ships sailing in Alaska, including Eurodam and Nieuw Amsterdam, which were the biggest vessels in the fleet – each holding just over 2,100 passengers – until Koningsdam launched last year.

Together with Zaandam, Noordam, Oosterdam and Volendam, they will be offering either seven-night cruises round-trip from Seattle or Vancouver, or one-way voyages that can be combined with myriad land stays in Denali National Park, Fairbanks and Dawson City in the Yukon.

Ship number seven, Amsterdam, is doing something a bit different: 14-night cruises round-trip from Seattle that visit the ports of Kodiak (an island named after the eponymous bears that live there), Anchorage and Homer, a settlement on the Kenai Peninsula that Captain James Cook claimed for Britain in 1778. Cruise-only prices for a June 19 departure start at £1,749.

And if you’re still wondering about that claim to the continent’s tallest mountain, it’s known as Denali – formerly Mount McKinley – and rises a whopping 20,310 feet above sea level.

Although Alaska is popular with American cruisers, the number of Britons visiting is small – just 21,000 in 2015, according to Clia. Cost and distance are likely deterrents. This is a shame as they are missing out on amazing scenery and activities that appeal not only to past passengers with a sense of adventure but also to holidaymakers who would normally never dream of setting foot on a ship.

They will sail through the Inside Passage, the name given to the sea route that weaves around countless islands along the west coast of Canada and the US, and cruise up close to vast glaciers. They can go on kayaking, zip‑lining and fishing trips, join bear and whale‑watching expeditions, get a bird’s-eye view of the landscape from float planes, and hike part of the Chilkoot Trail, used by prospectors to get to the Klondike fields during the 1896 gold rush. 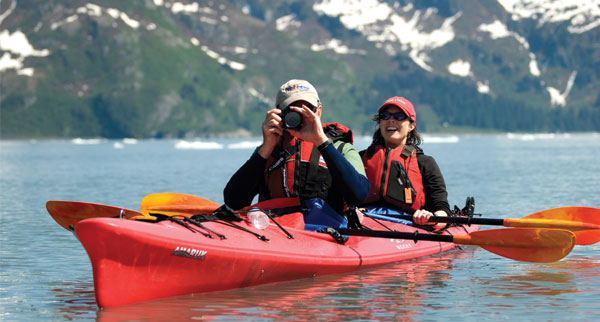 They’ll also visit quirky towns such as Juneau, the only state capital in the US that can’t be reached by road, and Ketchikan, where liquid sunshine (rain), lumberjack shows and totem poles are among the attractions.

In Skagway, visitors can tuck into Seize-Her Salad and Naughty Nelly Nachos in the Red Onion Saloon and then join a guided tour of the brothel upstairs (don’t worry – it is no longer in use).

In Sitka, where the Treaty of Cession was signed 150 years ago, the locals celebrate Russian Christmas on January 7 and hold the zany Running of the Boots festival in September to say goodbye to summer and greet returning salmon.

For an extra dose of spectacular scenery, clients can combine an Alaska cruise with a journey on the Rocky Mountaineer train through the Canadian Rockies. Princess Cruises has 14-day cruise-tours that combine a week in Canada (two days are spent on the train) with a seven-night voyage, with prices from £3,621 cruise-only for a May 13 departure.

Great Rail Journeys pairs a tour of the Rockies and two days on the Rocky Mountaineer with a one-week cruise round-trip from Vancouver on Norwegian Cruise Line’s Norwegian Sun, from £5,230, departing September 10, including flights.

Clients keen to cruise in Alaska in 2017 have even more choice than usual, as Seabourn is returning to the region for the first time in 15 years. The company’s 450-passenger Seabourn Sojourn is sailing 11, 12 and 14-day cruises between Vancouver and Seward that wend through the Inside Passage, visit ports such as Juneau, Wrangell, Ketchikan and Sitka, and sail past the Holgate, Aialik and Tracy Arm glaciers. The 11-day sailings start at £4,499 cruise-only for a June 1 departure. 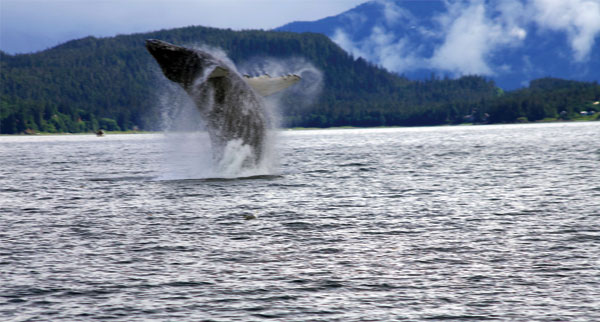 Seabourn is also bringing its Ventures excursions to Alaska. These have been tried and tested in Antarctica and Norway, and promise to get passengers close to nature on hiking, kayaking or Zodiac tours. Guests can look out for whales, otters, seals and puffins while kayaking in the Inian Islands (the same tour is also available by Zodiac for those who don’t want to paddle); hike to, and on, the Mendenhall Glacier from Juneau; and go on a seven‑hour bear-watching extravaganza from Wrangell.

Princess Cruises, Norwegian Cruise Line, Oceania Cruises, Silversea and Regent Seven Seas Cruises are among those companies regularly in Alaska for the summer season, which runs from May to September.

Crystal Cruises will also be back this summer with six cruises on Crystal Serenity, while Royal Caribbean International will have two ships in the region: Explorer of the Seas is sailing seven-night voyages round-trip from Seattle, while Radiance of the Seas has one-way sailings between Vancouver and Seward.

Celebrity Cruises’ Celebrity Solstice will be in Alaska with its new Sushi on Five restaurant and seven-night sailings that operate round-trip from Seattle. The line’s seven-night Tracy Arm Fjord round-trip cruise from Seattle on May 26 costs from £1,419. 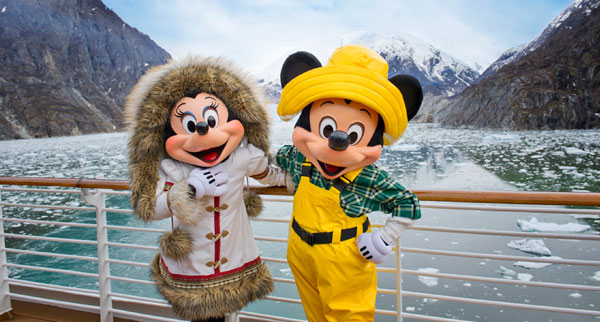 New from Disney Cruise Line is a nine-night voyage round-trip from Vancouver that visits Icy Strait Point and cruises past the Hubbard Glacier. The cruise departs July 24 with prices from £5,058 cruise-only.

The 2017 Alaska season hasn’t even started but a few cruise lines have already released their 2018 cruises.

NCL is underlining its commitment to Alaska by taking new ship Norwegian Bliss straight from the shipyard in Europe to Seattle in summer 2018 for a season of cruises to the 49th state. The cruise line has signed a 15-year agreement with the Port of Seattle and is contributing towards a $30 million upgrade to Pier 66’s facilities that will increase check-in space and create a new VIP lounge.

Details of the 4,000-passenger ship’s features have not been announced but the hull will be adorned with a humpback whale and her calf, among other marine animals, to give it an Alaska feel. The cruises go on sale this month.

Princess Cruises has six ships in Alaska this year but is increasing that to seven in 2018 as the 2,636-passenger Golden Princess joins the line-up. 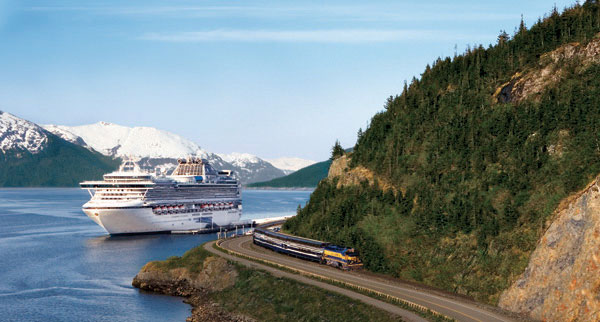 The programme features Inside Passage cruises round-trip from Vancouver or Seattle and one-way Voyage of the Glaciers sailings between Vancouver and Whittier (the port for Anchorage) that can be combined with a land stay in one of Princess’s own lodges in Denali, Mount McKinley, Copper River and Kenai. Transport between the ships and lodges is in Princess’s own glass‑domed train or by coach.

An 11-day Denali Explorer combo in May 2018, pairing a one-week Voyage of the Glaciers sailing with a four-day tour with accommodation in Denali and Mount McKinley lodges, costs from £1,391 cruise-only.