In recent years, Portland seems to have become the setting for any tale of American hipsterism. Oregon’s largest city has crept up under the radar somewhat – once a backwater, it has become one of the go-to cities in the US.

That’s mainly due to the DIY artisan ethos that started with microbreweries and has gone on to food trucks, coffee roasters, ice cream-makers, distillers and practically everything else since. But the greenness of the setting – Portland is surrounded by huge parks – doesn’t hurt either.

It’s not a place of big-ticket attractions, but it’s a fabulous city to delve into. And that will get a lot easier from May, when Delta launches direct flights to Portland from Heathrow.

The massive Washington Park on the northwestern fringe of the city contains two of the prime attractions. The first is the International Rose Test Garden, where hundreds of varieties of roses are interbred to create new ones. It’s the science behind floristry, and the roses are all neatly planted in beds, colours ranging from white to purple.
rosegardenstore.org 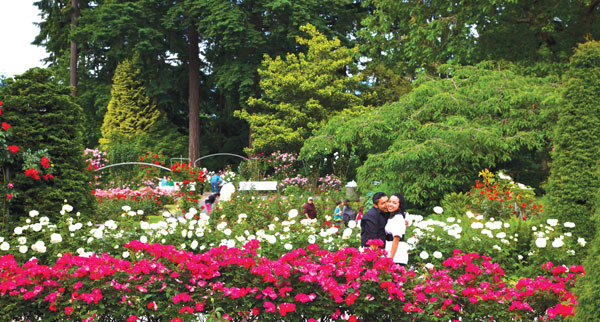 At the other end of the park, it moves from florists to forests. The World Forestry Center is all about trees, from how they have their own ecosystems
with various creatures at different levels, to how the timber industry has changed over the decades to make the forests more sustainable. There’s plenty on forest wildlife, identifying bear tracks or keeping streams clean enough for fish to survive in, and the exhibits on managing forest fires are unexpectedly gripping.
worldforestry.org

Not everyone goes to Portland for the flowers and trees. The city’s reputation as the microbrewing capital of the States has made it something of a pilgrimage site for beer lovers.

The breweries are spread throughout the city, often in not particularly obvious locations, which is where a beer tour comes in. Brewvana runs a variety of tours – some walking, some on a bus that has been designated as a tasting room so people can keep drinking while on board. Each itinerary varies, but what they have in common is several tastings, often including a chat with the brewer. Some of the breweries are picked because they do good food too, so there’s no need to worry about a heavy session without a properly lined stomach. From $59.
brewvana.com 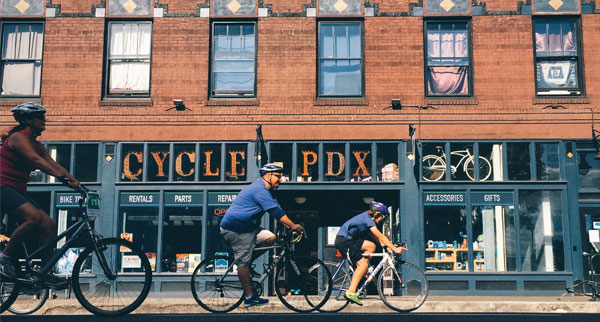 Guided tours are also a good way to get into the city’s food scene – and Cycle Portland offers a ‘foodie field trip’ for $59. This combines a two-wheeled exploration of the city with tastings at coffee shops, ice-creameries and food trucks. Eating beforehand is a mistake – this ends up as a proper feed over the course of a few hours.
portlandbicycletours.com

Two feet are another option for getting around. Portland Walking Tours offers several themed walks, some of which are food-slanted. The most fascinating is the Underground Portland tour ($23), which looks at the city’s often hilariously seedy history. It leaps from cunning prohibition-era bar owners to corrupt cops, via the ‘crimps’ who would lend illiterate new arrivals money in return for signing a contract that stated the money was actually a pay advance, and that they had to work on a ship until it was paid off.
portlandwalkingtours.com

The Mark Spencer Hotel occupies a stout, yellow-brick building downtown, and manages to come over as relatively homely. This is partly due to not being part of a chain, partly to the plants everywhere and partly to the thoughtful little extras such as the little library room with a book exchange and free tea, coffee and cookies. The rooms are relatively neutral but spacious, and usually include a kitchenette. The growlers (beer containers) that you can fill up at a local brewery are a nice Portland touch. Prices from $209.
markspencer.com 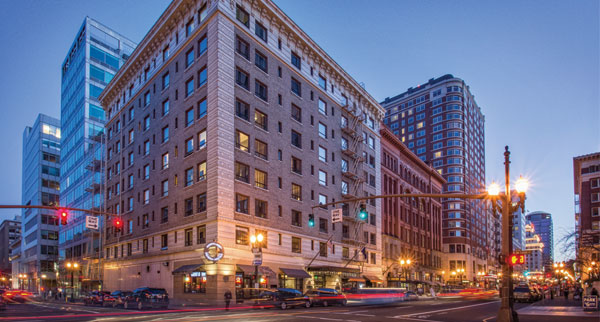 The Hotel Lucia is knowingly hip but great fun at the same time. Staff engage in sassy chat, and eye-catching decor like the wall of olde worlde cameras makes it stand out. Rooms come with vintage-style radio alarm clocks, decadent dark-wood headboards and minibars that stock local chocolates and wines. Between 5.30pm and 6.30pm, the hotel hosts a free craft beer hour for guests to sample local brews. Doubles cost from $175.
hotellucia.com

The Jupiter is one of the few hotel options on the eastern side of the Willamette River. It’s an arty conversion of an old motel that attempts to be a cultural hub. The bar regularly hosts live bands, the reception doubles as an art gallery and guests are encouraged to let out their creative instincts on chalkboards mounted on bedroom doors. Furnishing is simple but cool. Doubles start at $169.
jupiterhotel.com 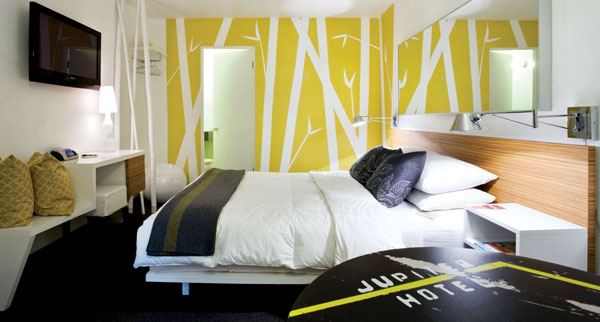 The Kennedy School isn’t particularly conveniently located but it’s a heartwarming project. The school closed in the 1970s, and the handsome, sprawling building could have become derelict. But then the McMenamin brothers took over, turning the site into a brewery, cinema, restaurant and hotel complex, filling it with all manner of weird and wonderful artworks and furnishings. Guests get to watch movies for free, and splash in a big soaking tub. Rooms from $135.
mcmenamins.com/kennedyschool

If Portland has hit the radar, then Oregon is still incredibly underrated. A road trip around the state, using Portland as an entry point, shows off an astonishing variety of landscapes.

Several companies run wine tours around the region, with tastings at a selection of wineries

Nearby, and easily covered in a half-day trip, is the Willamette Valley wine region, which is gaining an increasingly good reputation, especially for pinot noirs. Several companies run wine tours around the region, with tastings at a selection of wineries. Beautiful Willamette Tours offers five-hour trips from $100.
willamettetours.com 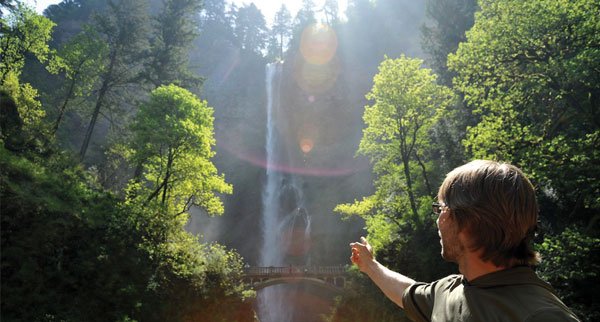 The other justifiably popular half-day excursion is the Columbia River Gorge, which offers towering cliffs, epic views and more waterfalls than you could ever wish to gather in one place. Multnomah Falls is the big boy, falling nearly 200 metres in two sections. Evergreen Escapes runs a six-hour trip out to the gorge, stopping at a couple of wineries in the Hood River area before returning.
evergreenescapes.com

There are three major ski resorts on the volcano, of which the Mt Hood Skibowl specialises in night skiing

From the Hood River wineries, you can hardly fail to notice the snow-topped Mount Hood on the horizon. The volcano is strikingly prominent, and is hugely popular with hikers. The top challenge here is the Timberline Trail, which stretches for 40 miles and is usually tackled in five or six days. In winter, skiing rather than hiking is the lure. There are three major ski resorts on the volcano, of which the Mt Hood Skibowl specialises in night skiing. It stays open during the summer months, offering mountain biking, horse riding, zip lines and mini golf. 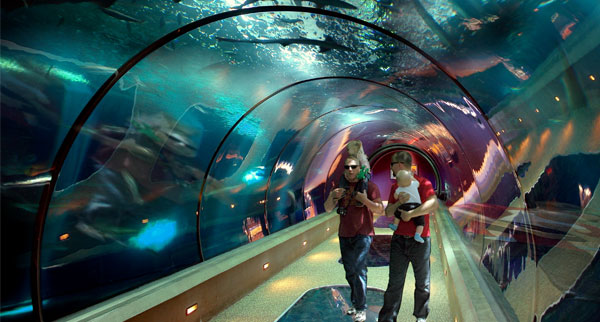 The Oregon coast is thoroughly undervalued too, despite being largely development-free and often impeccably beautiful. Four-mile-long Cannon Beach is the most alluring spot on the northern stretch, while Newport is the major hub in the south. The latter is home to the highly rated Oregon Coast Aquarium. Go between December and March, and a swim won’t seem all that tempting, but it is the prime time to see migrating whales.
aquarium.org

The state is well-suited to self drive itineraries, and Oregon is often packaged up with Washington State and northern California. But a loop circuit of Oregon is feasible too, and should include the Crater Lake National Park, where a road winds around the deepest lake in the States, offering rather special views along the way.