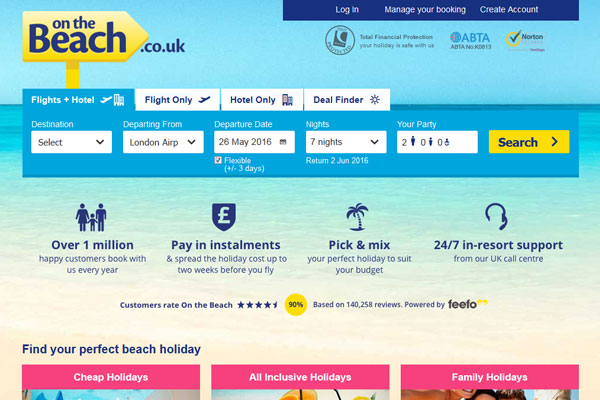 Online travel firm On the Beach Group today reported a 20% year-on-year rise in revenue for the four months to the end of January.

Booking volumes and revenue growth have strengthened and there has been a continuation of lower cost paid search marketing since the turn of the year, according to the company.

“Our growth in the period is also particularly pleasing given that many of the group’s key hotel partners in the western Mediterranean are holding back capacity to sell in the late market,” On the Beach said.

“This has led to an inevitable slowing of peak season sales to key destinations such as Majorca, mainland Spain and the Algarve.

“This trend should however lead to greater availability in these destinations in the late market with an offsetting increase in sales volumes.”

The company added: “The over-supply of seats into the western Mediterranean is presenting the group with multiple opportunities to leverage its scale and technological capability to consolidate its market leading position over the coming months.”

Trading between February and mid-July last year was disrupted by the “aggressive bidding and discounting” of the Lowcosttravelgroup, prior to its failure.

As such, year-on-year comparisons for On the Beach will be “significantly softer” in the next six months.

In a trading update ahead of the company’s annual meeting today, On the Beach said: “The first quarter of our financial year [the fourth quarter of the calendar year] is historically the quietest trading period for the group and booking volumes were impacted by the timing of the low cost carriers’ seat release for spring/summer capacity which resulted in a noticeable shortening of lead times.”

Chief executive Simon Cooper said: “The first four months of the new financial year has delivered a further solid period of growth for On the Beach.

“Our strategy of investing in our brand, hotel supply and technology to drive growth has delivered performance in line with the board’s expectations; with consumers attracted to our wide range of value for money beach holidays.

“Our second nationwide television advertising campaign started on Christmas Day and has helped drive this strong performance as our brand awareness continues to grow.

“The board remains confident in the group’s outlook and will continue to evaluate opportunities to enhance its market share position.”

On the Beach has introduced its international proposition, www.ebeach, into its second market, Norway, following a trial and testing period.

“The group has continued to optimise its platform and search technology, build its exclusive supply position and grow brand awareness through a nationwide offline campaign and the full benefits of these investments are expected to flow through in the remainder of this financial year,” the company said.

“On the Beach continues to efficiently execute its strategy. The board believes that the group is well positioned to generate strong growth in the current financial year.”

Results for the six months to March 31 are due to be issued on May 11.