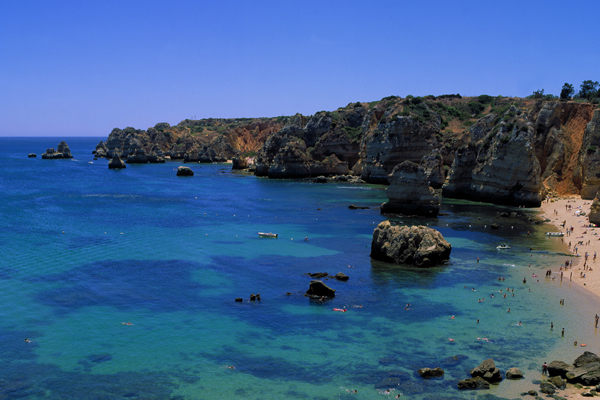 The Algarve has long reached old favourite status, but it is not easily pigeonholed. The southern Portuguese region is great for a fun in the sun holiday, and perennially popular with families and mature travellers alike. But there’s also a significant strand of activity-based holidays – most notably golf, but also walking, kayaking and surfing.

There are large differences in character across the region. The central south coast is highly developed, but inland is all cute villages, cork plantations and gentle-to-moderate hills. The west coast, on the other hand, is Atlantic-thrashed and wild, while the riverlands of the east are sweetly bucolic.

The region is manageable as most sights and activities of interest are within two hours’ drive of the main accommodation areas. But at the same time, there’s no one obvious central hub. Picking the right spot for a client’s interests, likes and dislikes isn’t quite a fine art, but it can make the difference between a decent holiday and a great one. Energy levels vary along the coast, with history and old-fashioned charm stronger in some areas than others. This feature covers the plum picks. 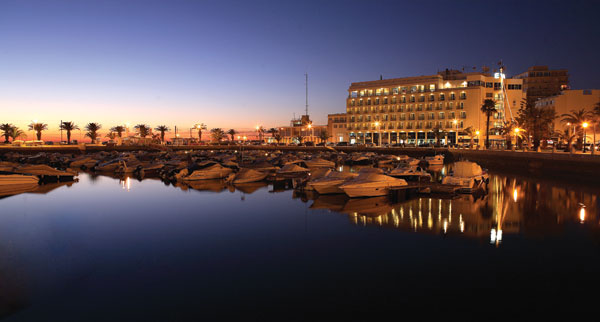 Why? The entry point to the Algarve is often skipped over, but Faro is the one place on the Algarve that feels like a real city that is not entirely given over to tourism. A sizeable student population helps, ensuring the bars retain a local feel.

What to do: The cathedral is rather squat-looking from the outside, but inside it’s wonderfully OTT, offering a baroque fest of carvings, lacquering and engraving.

For culture lovers, there’s the Museu Municipal de Faro, which is in a former convent. The building provides more of a wow factor than the displays, although the mosaic-packed section on the Algarve’s Roman history is pretty impressive.

Faro’s highlight, though, is the Parque Natural da Ria Formosa. The lagoon-esque estuary filled with mudflat islands is a haven for birds, and several boat trips depart from the marina, weaving through the channels. Some involve beachy island stays, but Formosamar runs a small wooden boat tour specifically intended for watching the storks, egrets, spoonbills and other birdlife.
formosamar.com

Stay: The Eva by the side of the marina is the top choice in Faro. There’s a pseudo-cool minimalism going on, but the position is great, and the 25 metres by 10 metres rooftop pool has great views out over the Parque Natural. Doubles cost from €83.
ap-hotelsresorts.com 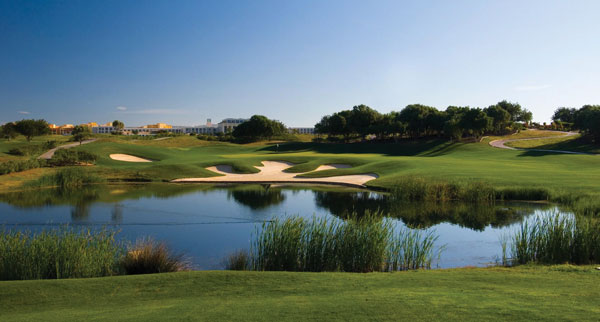 Why? West of Faro, Vilamoura is purpose-built and deliberately upmarket. It’s all upmarket hotels, villas, yachts on the marina and in particular, golf courses. It merges into Quarteira, which is definitely mass market: high rise, cheap and cheerful, with a solid beach.

What to do: The Oceanico complex and its seven championship courses is a golfer’s dream. The Arnold Palmer-designed Victoria course is arguably the pick of the bunch.
oceanicogolf.com

Quarteira, meanwhile is home to the big Aquashow water park, which also offers some animal attractions among the pools and giant slides.
aquashowpark.com 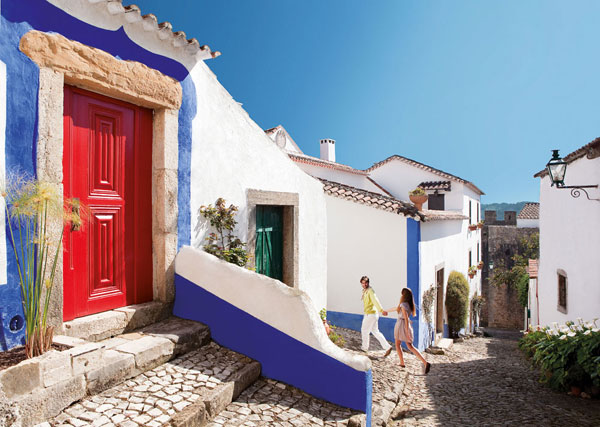 Why? There are two parts to Portimão. There’s the town itself, with its mosaic-tiled streets and a gorgeous riverfront. And there’s Praia da Rocha, which is all about the beach, although it has some excellent restaurants too – and it’s in this part of the Algarve that the seafood is particularly impressive.

What to do: The Museu de Portimão is the best museum in the region. It tells the story of the Algarve’s history and the fish-canning industry that shaped the region. Cut-out figures, props and original machinery convey the tale brilliantly, without the need for long-winded explanations.
museudeportimao.pt 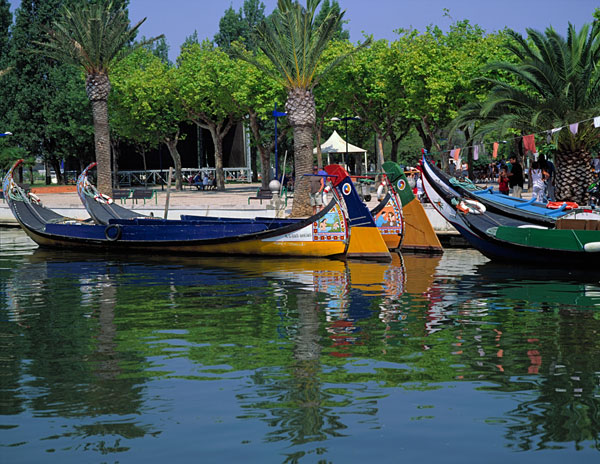 Why? Lagos is in the curious position of being the indisputable party central of the Algarve, while also having the lion’s share of the history. Some of that history is dark – Lagos was a key slave trade hub. While it attracts swathes of holidaymakers, it is not purely a resort town, making it possibly the Algarve’s best all-rounder. It’s at the western end of the main Algarve strip, and is a good base for exploring the wild west coast.

What to do: The Museu Municipal segues into the marvellously gaudy Santo António Church, but the star attractions are on the water. Boat tours head out dolphin-watching, while others pootle around the multicoloured cliff faces, caves and rock towers of the Ponta da Piedade. The more adventurous can get closer in a kayak. Outdoor Tours charges €25 for a half-day tour.
kayak-lagos.com

Stay: The sprawling Cascade Wellness and Lifestyle Resort has a health focus, as the name suggests. It has a huge freeform pool, its own football pitch, courtyards full of exercise bikes and tastefully decorated rooms themed
on different continents. Apartments cost from €201.
cascaderesortalgarve.com 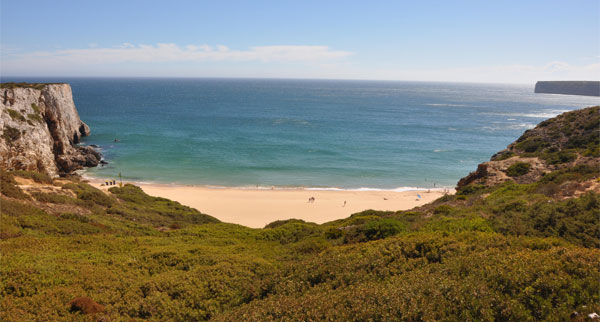 Why? Often tackled as a day or half-day trip from Lagos, Sagres is an alternative base for the west. It’s quieter, popular with surfers, and home to a good selection of beaches. It attracts younger travellers who want a little more than a week of respite by the pool.

What to do: The Fortaleza de Sagres is a mammoth defensive bulwark dating back to Portugal’s Age of Discovery. The bulky ramparted facade gives way to a windswept headland, with signs explaining the flowers and clifftop perches for watching the waves hammer into the rocks.

Also nearby is the Cabo de São Vicente, supposedly the most southwesterly point in mainland Europe. Go, admire the lighthouse and end of the earth feel, and don’t think too hard about how meaningless that ‘most southwesterly’ boast is.

There are also plenty of surf schools in Sagres, with WaveSensations offering beginners’ lessons for €50. That said, the real surf scene is on the west coast, especially around the world-class breaks at Praia da Arrifana and Praia do Amado. 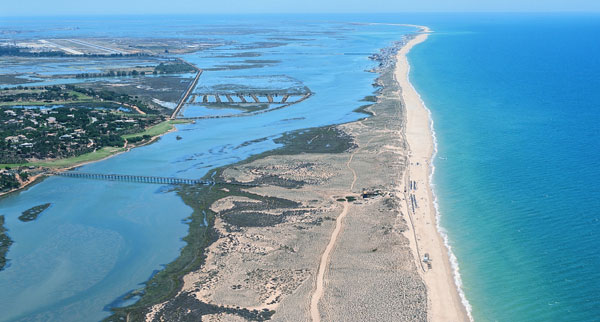 Why? If Lagos is the best hub for exploring the west, Tavira is the best for exploring the east. It’s one of the prettiest, most atmospheric towns on the Algarve coast, and has an older, quieter vibe. Whitewashed buildings, distinctively tiled roofs and promenadable riverbanks are peaceful attractions, but the seven-mile-long, dune-backed Ilha de Tavira is the star. A short ferry ride from the town centre and part of the Parque Natural da Ria Formosa, for many this is the most impressive beach in the Algarve.

What to do: A day out exploring the unspoilt eastern Algarve from Tavira is highly advisable. The drive up to Alcoutim along the Guadiana River, which forms the border with Spain, is gorgeous, as is the castle once there. On the way back, there’s an even bigger castle at Castro Marim and striking architecture at Vila Real de San António. Then there’s the honeypot, tiny clifftop hamlet of Cacela Velha, where the setting and blue-painted buildings are wonderfully photogenic.

Stay: The Pousada do Convento da Graça is a bit special. The converted monastery has ruined castle walls by the pool, plus high-ceilinged bedrooms with dark wood floors and high thread count linen. Rooms cost from €157.
pousadas.pt/en

Jet2holidays offers a week self-catering at the three-star Falésia Mar in Olhos de Agua, which is under new management for 2017, with flights from Stansted departing May 4, from £229 including baggage and transfers.
jet2holidays.com

Classic Collection Holidays offers seven nights with breakfast at Ria Park Hotel & Spa from £939 in June, based on two sharing a deluxe room with flights from Gatwick to Faro and private transfers.
classic-collection.co.uk