What is there to see in Santiago? Expat Sarah Gordon offers an insider’s take on the Chilean capital.

Tucked into the skirts of the Andes mountain range and within easy reach of the Pacific coast and some of the world’s finest vineyards, Chile’s cosmopolitan capital has a lot to recommend it.

Yet Santiago has flown under the radar compared with other South American destinations. All that is set to change now British Airways has launched the first direct flights from London to this leafy city.

Santiago is a jigsaw of diverse districts encompassing everything from colonial buildings and sleek skyscrapers to landscaped parks and foodie neighbourhoods packed with patio restaurants.

Long southern-hemisphere summers see the city’s tree-lined streets thronging with revellers late into the night and a clutch of world-class chefs have set up shop in the capital celebrating Chile’s vast larder of local ingredients and helping transform it into a culinary hotspot.

All these exciting developments mean there has never been a better time to explore this underrated capital. 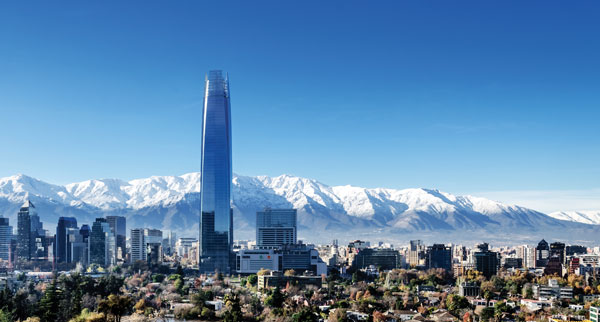 Why go? This is where it all began, where Spaniard Pedro de Valdivia founded the city of Santiago del Nuevo Extremo in 1541 after months spent on an arduous journey from Peru through the Atacama Desert.

What to do: Cerro Santa Lucía is a pretty hilltop park with views of the Andes, where bougainvillea tumbles down the walls of an old fort. It was where Valdivia founded the city. Just a few blocks away, Plaza de Armas became the centre of the colonial capital and is graced by a baroque cathedral and soaring Chilean palm trees. The many fish restaurants that form part of the vibrant Mercado Central make the perfect lunch spot, while the Chilean Museum of Pre-Columbian Art is a great introduction to the country’s indigenous culture.

The neoclassical La Moneda palace is a key spot in more recent history – it is where president Salvador Allende died during the 1973 coup d’état staged by General Pinochet.
precolombino.cl/en
ccplm.cl

Where to stay: The new Hotel Magnolia (doubles from $220) is set in a century-old mansion with a distinctly modern twist. Think black-and-white marble flooring mixed with an industrial-style suspended staircase and stained-glass windows with coats of arms, alongside sleek bedrooms of blonde wood and monochrome accessories.
hotelmagnolia.cl 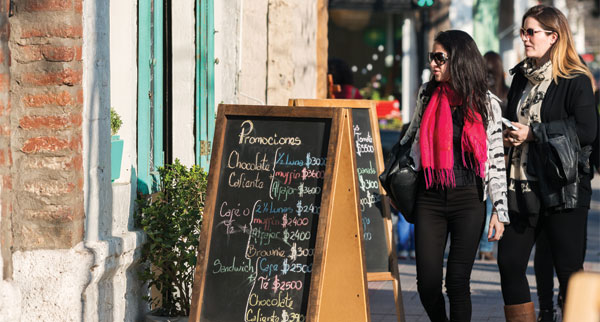 Why go? This colourful little neighbourhood used to be home to the city’s Italian immigrants and is filled with chic shops, antiques dealers, one-of-a-kind clothes stores and quirky cafes.

What to do: Little artisan shops and beautiful courtyard eateries are hidden behind huge painted wooden doors along Avenida Italia. Independent boutiques sell everything from jewellery and clothes to paintings and leather goods, while the corner of Caupolicán street is where antiques workers restore furniture outside their stores in the sunshine. The pretty plant-filled patio restaurants and cafes sell fresh juices and traditional Chilean sandwiches and empanadas for lunch, while specialist chocolate bar Xoco Por Ti serves five daily choices of hot chocolate.

Where to stay: In keeping with this stylish district, Carménère Eco-Hotel (doubles from $220) is a 1930s mansion that has been turned into an elegant boutique hotel of just five bright rooms with original parquet floors, a pretty garden and a complimentary glass of carménère on arrival.
hotelcarmenere.com 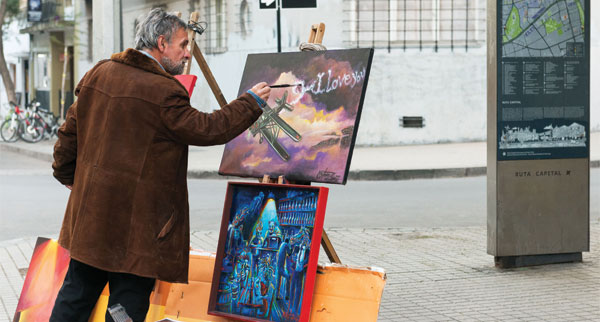 Why go? With winding cobbled streets, 19th-century architecture and upmarket eateries, once-tired Lastarria is an artistic and culinary hub peppered with unique bars, shops and museums.

What to do: Lastarria is the place to visit with an appetite. Its streets are filled with restaurants serving everything from traditional Chilean fare to international cuisine and specialising in pisco and the country’s amazing array of wines. Music recitals and dance performances make a fascinating night out at the Gabriela Mistral cultural centre – named after the poet who was the first Latin American to win a Nobel Prize in Literature – while the stalls on José Victorino Lastarria street sell everything from art and handicrafts to rich pastries.

Where to stay: There is an excellent boutique hotel at each end of this tiny cultural corner of Santiago. The Singular (doubles from $274) is a stylish luxury option with grand rooms, a spa, rooftop pool and bar. The art deco Luciano K (doubles from $152) is set in a beautiful 1920s mansion with the oldest lift in Santiago, as well as its own pretty roof terrace.
thesingular.com
lucianokhotel.com 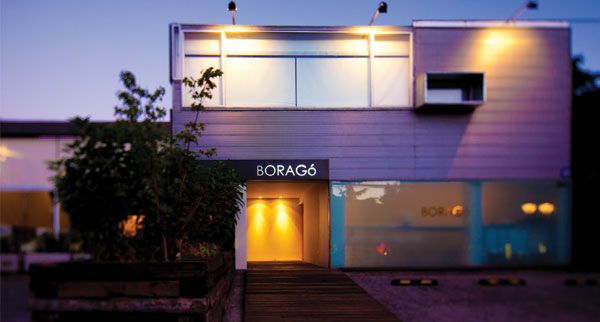 Why go? Wide boulevards, beautiful houses and landscaped parks make up this upmarket district, along with some exceptional restaurants and chic boutiques.

What to do: Clients looking to buy some unique high-quality souvenirs should head to stylish shopping street Alonso de Córdova. Kuna specialises in elegant alpaca-wool throws, scarfs and sweaters, while Enfit is ideal for beachwear. Galería Animal is one of several galleries showcasing up-and-coming artistic talent. A lazy afternoon can be spent strolling the carefully landscaped Parque Bicentenario, with its views of the mountains, then the best dinner in the city can be enjoyed at Boragó, Chile’s most celebrated restaurant and fourth in the list of Latin America’s top 50 eateries. Make sure your client books well in advance for a taste of foraged ingredients from all over Chile, whipped up into inventive dishes by chef Rodolfo Guzmán.

Where to stay: Set just off Alonso de Córdova, with a rooftop pool and a stylish terrace where beautiful people sip cocktails and watch the sun set, the Noi Vitacura (doubles from $189) has expansive rooms, a spa and a cosy restaurant serving a seasonal menu.
noihotels.com 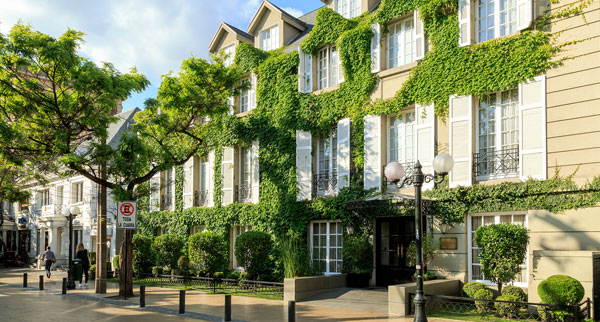 Why go? Travellers are often surprised to hear they can simply hop on the metro to discover beautiful vineyards overlooked by snow-capped peaks.

What to do: Located in the far east of Santiago, right at the foot of the Andes, this area is home to the historic Cousiño-Macul vineyard, founded in 1856 and still owned by the same family. It offers winery and cellar tours, as well as bicycle trips around the whole vineyard, all ending up with a tasting. Down the road, Viña Aquitania is a boutique winery set up by French experts that produces cabernet sauvignon, carménère and syrah. A tour explains the whole process before a tasting featuring three of their reserve wines.

Where to stay: There aren’t any hotels in this area, but Hotel Le Rêve (doubles from $200) is a beautiful boutique hotel in a French-style manor house in Providencia. It is within easy reach of Metro Line 4, which goes to Quilín, the best stop for accessing the vineyards.
lerevehotel.cl 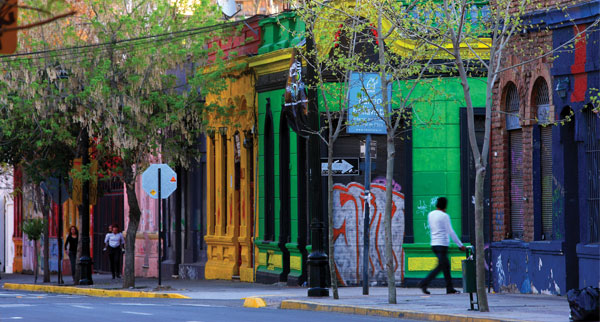 Why go? Across the Mapocho River from Santiago Centro is a bohemian district where buildings are painted with bright street art and nightlife spills on to the streets into the early hours.

What to do: By day, Bellavista is ideal for strolling and appreciating the brightly painted houses. Tucked down a side street is La Chascona, late Nobel Prize-winning poet Pablo Neruda’s quirky house, decorated to look like a cross between a ship and a lighthouse. In the green lung of the city, Parque Metropolitano, there is a 90-year-old funicular that rattles visitors up San Cristóbal hill for the best views of the city, while energetic clients can hike the many trails up to the summit. After sunset, the restaurants and bars that line the streets of Bellavista make it one of the city’s top nightlife spots.
fundacionneruda.org

Where to stay: Famed as Santiago’s first boutique hotel, The Aubrey (doubles from $195) is a beautiful oasis within Bellavista. Sprawling across two grand 20th-century houses, it is a maze of patios and leafy balconies, with a spectacular swimming pool lined with Bali beds. Guests can enjoy a free pisco sour on arrival, too.
theaubrey.com

Cox & Kings has a 12-day private Essence of Chile tour from £3,795, including direct BA flights. Starting in Santiago, the tour takes in the Atacama Desert and Torres del Paine national park in Patagonia.
coxandkings.co.uk

Veloso offers a 15 day Azul private tour featuring Santiago, the Atacama Desert, Valparaíso and a five-night cruise through the fjords. Prices start at £5,860, including flights.
veloso.com

British Airways has introduced a four-times-a-week service from Heathrow to Santiago, with return fares from £710. The direct flights are operated by a Boeing 787-9 Dreamliner aircraft offering a choice of Economy, Premium Economy, Club World and First.

Santiago street art tour: San Miguel isn’t one of Santiago’s most impressive neighbourhoods, tucked away in the southern suburbs a metro ride from the city centre, with low-rise, low-rent housing in between tired tower blocks and sprawling factories. So it seemed an odd spot to start a street-art tour – until we rounded the corner, that is, writes Katie McGonagle.

There, Urban Adventures guide Maria revealed the secret of these otherwise uninviting blocks of flats: each gable end bears a larger-than-life mural created by some of the best street artists in the world, drawn to the Chilean capital by community champion Roberto Hernandez in a bid to revitalise this flagging barrio.

What started as a handful of paintings has transformed into more than 50 murals spread across several blocks, earning this district the status of an Open Air Museum. These artistic endeavours are as varied as they are colourful, some paying testament to aspects of Chilean life – from its seafaring coastal populations to the unique way of life on Chiloé Island – while others have a social or political message, shining a light on as-yet untold stories from around the city.

What unites them all, however, is the sense of shared enthusiasm that has lifted the spirits of this community – so much so that they’ve started adding their own efforts, with a mosaic mural made from recycled bottle tops, proving once again this community is full of surprises.

Book it:The Residents of Art Street costs from £52 with Urban Adventures, including a meal with a local family. Tours depart six days a week.
urbanadventures.com