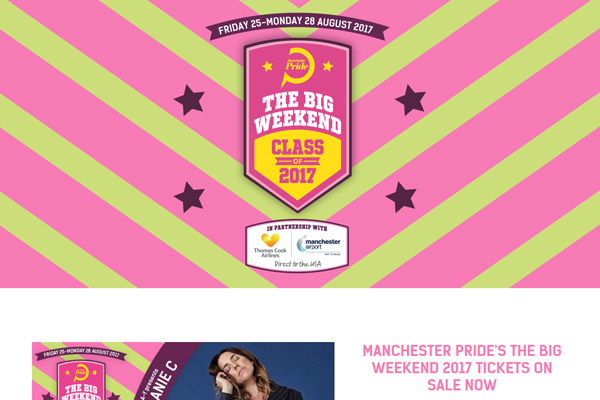 Thomas Cook Airlines, and Manchester airport are to return as headline sponsors of Manchester Pride’s The Big Weekend over August bank holiday.

The pair will also be sponsoring the main stage again during the four-day event, which will now be known as the “Thomas Cook Airlines USA Stage”.

It will be the sixth consecutive year for Manchester airport as headline sponsor, and the third for Thomas Cook Airlines.

It is the second time they have sponsored the main stage at the iconic event, with the overall profile focusing on new direct flights to San Francisco from Manchester by the airline.

The airline and airport will have a Manchester Pride Parade entry, plus they plan to take a space in the Expo, which will be dedicated to talking to visitors about equal employment opportunities available at Thomas Cook Airlines and Manchester airport.

Thomas Cook chief hotels and airlines officer, Christoph Debus, said: “Last year was such a great party and we want to go even bigger and better this year to celebrate the amazing diversity in our communities and to strengthen the connection we provide between the north-west and our seven direct routes to the USA.”

Ken O’Toole, chief executive of Manchester airport, added: “We are pleased to jointly sponsor Manchester Pride’s The Big Weekend, alongside one of our largest airlines, as we prepare to welcome thousands of international visitors to the region over the August bank holiday weekend.”