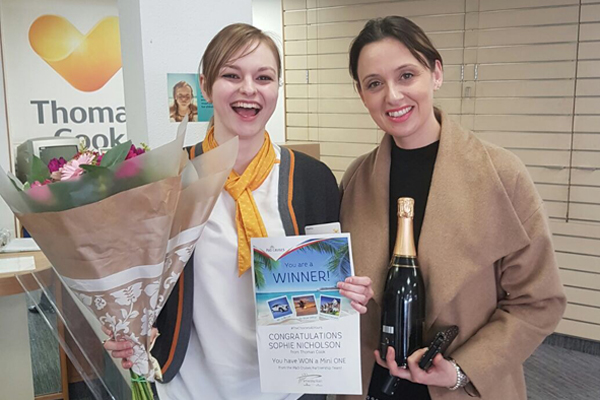 See our gallery of agent winners

P&O Cruises and Cunard have rewarded eight agents with prizes worth more than £12,000 each as apart of the lines’ biggest ever wave campaign.

Agents who made bookings between December 23 and February 28 on a ‘select price’ offer qualified for the chance to win a prize.

Three Mini Ones were given away as well as a £12,000 holiday, rent paid for year and three mini-breaks.

Sophie Nicholson from Thomas Cook in Wellingborough was left ‘speechless’ when she found out she had won a Mini One.

Other Mini winners were Jeffrey Bilham from Barrhead Travel in Cumbria and Tina Conlan from Iglu.

Linda Singh from ROL Cruises won a £12,000 holiday and Tina Eyres from Thomson in Exmouth will have her rent paid for the year.

Cunard winners were Donna Nicholson from Bolsover Cruise Club, who will be going to Las Vegas, Amy Chandler from Hays Travel in Southampton won a trip to Iceland and Samantha Disley from Thomson in Clevedon won a trip to Paris.

Director of sales operations Natasha Richardson said: “We have just come to the end of our biggest ever wave campaign and competition and we would like to say a huge thank you to all our agent partners for their bookings and entries during what has been our most successful wave.

“We listened to agent feedback and made sure the competition was simple to enter, which resulted in a record amount of entries. We also offered the biggest ever competition prizes. Congratulations to all the winners.”

See our gallery of agent winners