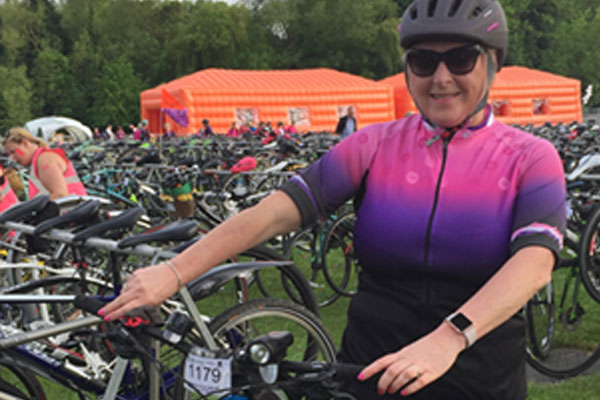 A homeworker is to cycle more than 200 miles over five days in Brazil to raise money for cancer charities in memory of her late mother.

Ace Travel 2 owner Sue Welsh is calling on the travel industry to help her to raise £3,000 before the 217-mile Women V Cancer Cycle Brazil 2017 challenge for Action for Charity in October. So far she has collected £470.

Sue, 52, was inspired to take part after a charity bike ride in the UK last year in aid of Action for Charity, which raises funds for Breast Cancer Care, Cervical Cancer Trust and Ovarian Cancer Action.

Her mother Annie Vale – who also worked in the travel industry – died in March, aged 86. She had survived breast cancer seven years ago only to be diagnosed with lung cancer in 2015. Annie and Sue’s dad George founded and ran a coach and taxi firm Vales Coaches in Salford and encouraged Sue when she set up her own travel business.

Sue, who cycles 50 miles every weekend and goes on shorter rides twice a week to train for the event, said: “Mum knew I was going to do this cycle challenge and said she would be really proud of me.

“She said it would be a wonderful thing to do and that’s what inspired me. It’s keeping me focused. I’m not going to let her down. I also want to give something back to all the people who looked after my mum.”

Sue cared for her mother and attended every hospital visit during her 15 month long battle with lung cancer, and spent time at her bedside every day when she was moved into a hospice.

“I love my job and didn’t want my business to fail so I worked at mum’s bedside,” said Sue, who set up her agency 26 years ago and moved her business off the high street eight years ago.

Sue, who has also lost three stone during her training for the Brazil challenge, is a finalist for the 2017 Aspire Homeworker of the Year award as well as the Aspire Extra Mile Award, which she won last year. She also won Travel Network Group member of the year 2016.