But last week, dozens of customers jetting off on their summer holiday witnessed just that when the managing director of the UK’s biggest tour operator spent the day as a member of Thomson Airways cabin crew on a flight to Menorca.

Longman said he had a  new-found respect for the role after his back-to-back flight.

“As a senior member of the team it’s important to understand what’s happening on the ground,” he said. “You can become a little bit removed from that environment.

“I have a new appreciation for how hard [cabin crew] work is. It’s more complicated and more elements to it than I imagined.
“A massive part of the role is health and safety, but flight crew also have to be entertainers and diplomats.” 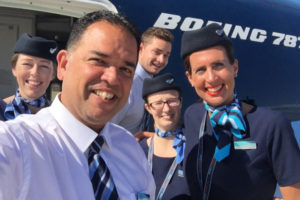 Longman met the crew at 4.30am at Gatwick for a pre-flight briefing before greeting passengers and helping them with their luggage. Then it was on to serving breakfast, collecting rubbish and restocking duty-free.

Longman, who has done ‘back-to-the-floor’ days in Tui’s retail stores, said the airline had lofty ambitions to become the best airline in the world. And it may be on track: passengers voted it as the world’s best leisure airline at the World Airline Awards last week. 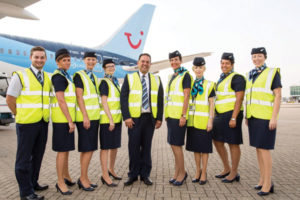 “I fly a lot and chat to the crews, but none of us had been through the whole experience,” Longman said. “The flight is such an important part of the holiday.”

Asked what changes he would implement as a result of his experience, Longman said: “We have good customer data and we’re not using it to the full extent to give the best customer service, so that’s something I’m keen to look at, as well as some operational things I’ll share internally to make life easier for the crew.”