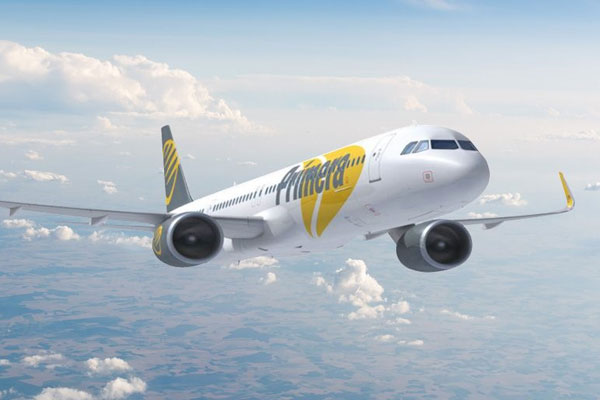 Danish carrier Primera Air will launch transatlantic flights with single-aisle aircraft next year when it opens bases in Paris, at London Stansted and at Birmingham in the UK.

Primera Air plans to fly daily to New York Newark and four times a week to Boston’s Logan Airport from all three airports.

The airline, part of Nordic tour operator and travel agency group Prima Travel Group, will operate the new Airbus A321neo on the routes.

The single-aisle aircraft, a longer version of the A320 with new fuel-efficient engines, has a range of 4,000 nautical miles or 7,400 kilometres and can seat up to 180 passengers.

Primera plans to start direct flights from London to New York next April and to Boston from May.

Services will operate with two economy and premium cabins.

The carrier is due to take delivery of eight A321neos next year and said it would launch two further US services, including a third from Stansted later next year.

It currently operates solely short haul flights around Europe with a fleet of nine Boeing 737s. Primera Air has 20 Boeing 737MAX aircraft on order in addition to the A321s.

President and chairman Andri Ingolfsson said: “With our new Airbus A321neos we will operate routes traditionally served only by wide-body aircraft.

“We will be able to offer unprecedented prices to passengers from France and the UK to the US.”

Ingolfsson claimed the product and service would “merge low fares and high quality”. Tickets went on sale this week at primeraair.com

London Stansted chief executive Andrew Cowan said: “There is enormous demand for flights to New York and Boston from London and the east of England. We look forward to working with Primera to add more routes.”

Stansted is the main base of pan-European low-cost giant Ryanair.