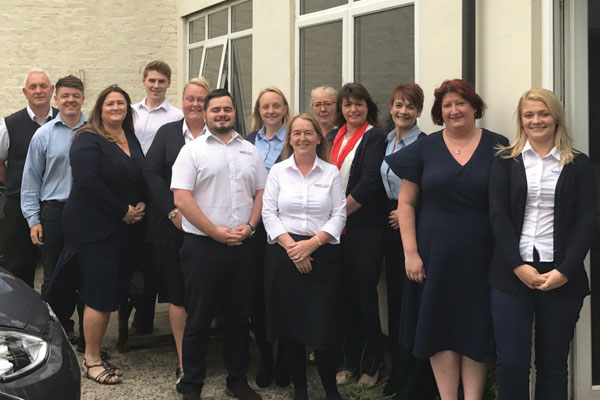 Natasha Salmon goes behind the scenes (and in front of the camera) at Merseyside agency Vision Cruise, which has its own TV channel.

After the unexpected popularity of a Teletext page in 1989, Vision Cruises’ business changed from a cluster of small shops to a successful call centre with its own TV channel.

John Cooper is the brand director, as well as the face of Vision’s many daily and weekly cruise programmes on Holiday & Cruise TV (Sky channel 256). He was keen to speak about the company’s development after almost 30 years in business.

His first job of the day, at the offices opposite Waterloo station on Liverpool’s Metro line, is to open his fan mail.

“The nice gentleman has sent a letter asking for advice on booking a cruise, plus a card and postcards from his local area in Dartmoor,” he said. “I’ll absolutely reply.”

Dartmoor, in Devon, is nearly 300 miles from Vision’s offices, showing the span
of the agency’s customers and viewers, from humble beginnings in Liverpool.

Historically, the company had Merseyside-based clientele, and roadshows in Liverpool and Southport still attract almost 800 customers each.

But recent research shows its exclusive cruise offers are a hit across all of England and Wales.

“Fewer than 10% of our customers are now from the Merseyside area, which shows how far we have grown,” Cooper said.

“Our hotspots include London, the southeast, Wales, Sheffield, the northeast
and a lot of very rural areas.”

From agency to call centre

The agency began in the 1980s as a series of small shops called Metro Travel owned by Cyril Runacres, the father of Vision’s managing director Andrew.

Andrew was the manager of the Anfield store and in 1985 met Cooper, who worked as a sales rep for Lancaster Holidays – a division of ILG, which went bust in 1991.

“Me and Andrew instantly got on really well, he was one of my accounts so I would see him regularly during the winter season and at work abroad during the summer,” added Cooper, who got his first taste of presenting on Radio Salou in Spain while working for Sunset Holidays.

“A couple of years later we met some guys from an operator called CTC, who ran Russian cruises out of Liverpool. They said Andrew was mad not to be doing his own cruises.”

Runacres heeded the advice and bought a page on Teletext.

“Within 10 minutes the phone started to ring and in one week the Teletext page had done more business over the phone than all the shops together,” Cooper recalled. “The rest is history.”

The shops were sold and Runacres bought Cavendish House in Crosby to set up a call centre as Liverpool Cruise Club.

Cooper, meanwhile, worked for about a decade as a radio DJ in Southport before joining the company, which became Vision Cruise, in 2007.

“By this point the company had really grown and Andrew told me he wanted to move into TV,” said Cooper.

“It was difficult to begin with. We were filming in Manchester after buying time on a channel called Shop on TV.

“The shows went down really well but when Shop on TV was sold we decided to bite the bullet and set up our own channel.”

Teams package cruises daily, with all updates on prices, cabin availability and destinations communicated to the TV production team. Vision owns its own channel, so can change things as late as 10 minutes before the programme airs.

Office manager Cath Medcalf oversees the day-to-day running of the 48-strong office, which includes a reservations team (which works from 6am until 10pm to compete with demand), the operations team, the social media and marketing department plus the after-sales and accounts teams.

Cooper admitted they are often a victim of their own success with viewers of Holiday & Cruise TV using their programmes for information rather than as a booking channel. He added: “I was on a ship recently and half the passengers recognised me. They all wanted selfies but checking back with the office, none of them had booked through us.”

Despite these blips, Cooper and fellow presenter Richard Cross continue to host
their own sailings, taking up to 300 passengers at a time.

Who is watching the Holiday & Cruise channel?

It was a delight to spend the day with John Cooper and the Vision Cruise team, who are all passionate and dedicated to providing fantastic cruise holidays and deals to customers.

The company is unique in having its own TV channel and the coherence between sales and production teams is seamless. For instance, the deals of the day were worked into the evening’s programme and can be altered up to 10 minutes before transmission.

All the programmes, Cruise@6, Wake Up and Cruise, and Best Value Cruise  Hour, are filmed ahead of transmission. The rest of the channel is made up of pieces filmed by Cross and Cooper on board ships and in destinations, which run alongside commercial segments.

I was shown behind the scenes; able to peak into the green room and sit in the gallery while they filmed. I was even allowed to sit behind the desk in the Holiday & Cruise TV studio and read a few lines!

I’ve been at Vision Cruise… for nearly three years.

The best part of my job is…making sure our customers get the best value cruise deals.

Quirky requests…we have a man who is in his 90s who regularly sails by himself with Fred Olsen Cruise Lines. He is still so active.

I have been at Vision Cruise… for four years.

I’m a specialist in… Alaska cruising with pre or post-cruise package including the Rocky Mountaineer.

The best part of my job is…the customers. Quirky requests…I have a couple who have separate seats on flights, different cabins and eat at different restaurants on the ship.

Favourite destination… I would love to visit Alaska after becoming so confident in selling it.