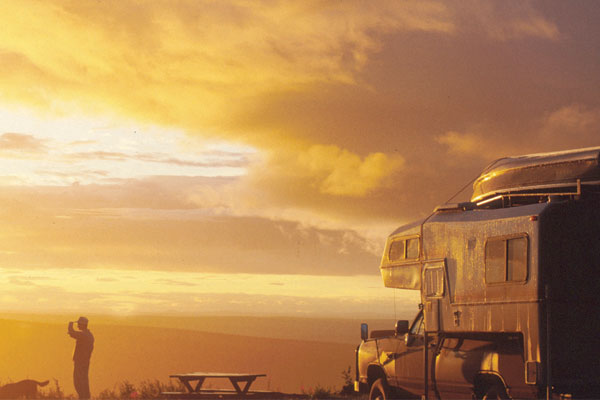 The north is as much a state of mind as a geographical location, a quest for stark beauty, freedom, solitude and adventure. All the Arctic territories – Alaska, Canada, Finland, Greenland, Iceland, Norway, Russia and Sweden – loom large in the popular imagination, with hit crime-noir shows such as Fortitude, Trapped and Fargo exploring the mysteries of remote northern communities set within rugged landscapes, untouched over the course of time.

For travellers, few northern destinations possess the magic of the Yukon territory in Canada, where the awe-inspiring scenery is enlivened with quirky frontier towns, the northern lights illuminate luxury lodges, activities run the gamut from dog-sledding to lazing in natural hot pools, and scenic highways are icons in their own right.

In summer, the Yukon has long been a magnet for adventure-sport obsessives from Canada and the US, plus in-the-know campervanners from Germany, Scandinavia and the UK. But there’s something delicious about striking out for Canada’s far north during the winter months, rebelling against the sun-seeking hoards flying south, choosing to take the road less travelled.

And what a road it is. The 450-mile Dempster Highway – which starts near the Alaskan border in the heart of the Yukon, crosses the Arctic Circle and winds up in the Northwest Territories town of Inuvik – is one of the world’s bucket-list drives. I might have passed my driving test only 15 months ago, with road trip experience confined to pootling a Polo around Hackney, but I was about to spend a week driving the Dempster in a chunky SUV, through dense boreal forest and Arctic tundra. I’m definitely not in Hackney any more. 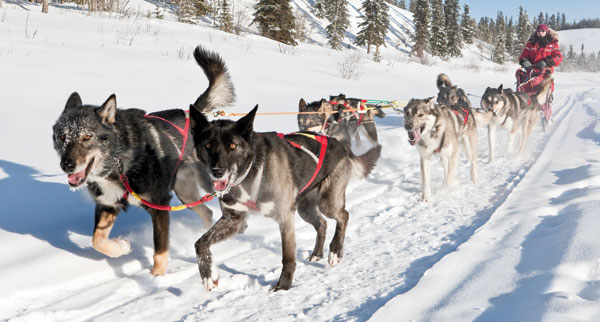 Whitehorse, the Yukon’s only city, is just a two-hour flight from Vancouver (making for a perfect culture-and-culinary city-break stopover) but feels a world away. Twelve hours after landing, I’m driving a sled – pulled by six former rescue dogs – along the frozen Takhini River, with Muktuk Adventures, whose rustic log cabins and cosy cafe offer an atmospheric alternative to the bland hotels in town.

Mushing is no touristy gimmick in Yukon; the Yukon Quest is the toughest dog-sled race in the world, stretching nearly 1,000 miles between Whitehorse and Fairbanks, Alaska. Holding the reins for 45 minutes rather than six frostbitten days, I find it a mesmerisingly tranquil way to traverse the landscape.

I spend my first night in the Yukon soaking in the mineral-rich waters of rustic Takhini Hot Pools, an unpretentious local favourite, gazing at the stars and willing the northern lights to come out and play. The adjacent Cafe Balzam brings the Quebecois culinary tradition of savoury crepes to the Yukon, while showcasing local ingredients and produce. It’s a perfect introduction to the Yukon’s organic farming and culinary scene – and to the local microbrewery, Yukon Brewing. 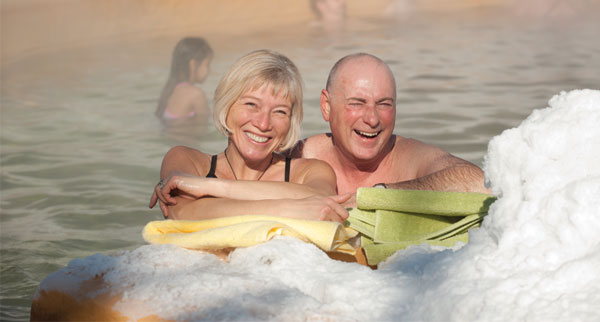 From June to September, wildflowers fringe the South Klondike Highway down to the beautiful Southern Lakes region south of Whitehorse. Lakes and rivers sparkle and the glaciers, trails and Alsek River within Kluane National Park (which includes Mount Logan, Canada’s highest peak) become a back-country playground for hikers, mountain bikers, kayakers and rock climbers. But locals will tell you they prefer the winter months, when the whitewashed mountain scenery sparkles against a searingly blue sky.

From Whitehorse, we drive north along the North Klondike Highway, and I’m soon scouring the landscape for caribou and moose rather than other vehicles, which are few and far between. Close to 80% of the Yukon remains pristine wilderness, home to some 200,000 caribou, 70,000 moose, 22,000 mountain sheep and 17,000 bears. Humans are hopelessly outnumbered by animals, with just 34,000 people in an area twice the size of the UK. It feels good.

“Humans are hopelessly outnumbered by animals, with just 34,000 people in an area twice the size of the UK. It feels good.”

A little over 300 miles later, I’ve come to trust the winter tyres of our aptly named GMC Yukon, and we cruise into the historic town of Dawson City, which sits at the confluence of the Yukon and Klondike Rivers, just 150 miles south of the Arctic Circle. ‘City’ is a stretch; today there are 3,000 year-round inhabitants, although at the peak of the Klondike Gold Rush in 1898, the population swelled to 40,000 and Dawson City was dubbed ‘the Paris of the North’. (Of these, no more than 4,000 struck gold, and only a few hundred became rich.) 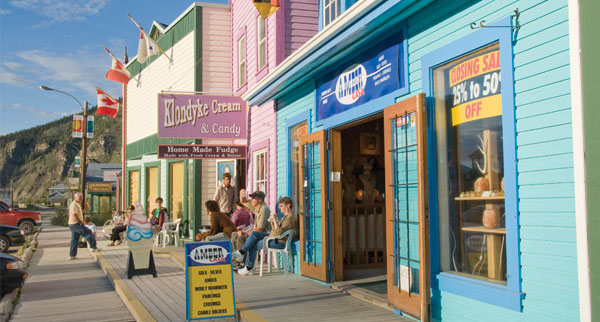 Summer is festival season, with the Dawson City Music Festival making the most of the midnight sun in July. As hip as Dawson feels – and the vintage stores, yoga studios and artist residencies attest to that – snow boots, merino layers and balaclavas are perfectly appropriate attire in restaurants, bars and even for cocktails in the lavishly retro Diamond Tooth Gertie’s Gambling Hall, Canada’s oldest casino. With temperatures hovering at about -20C, I silently thank every single feather in my Canada Goose down jacket on the way to dinner at the Drunken Goat Taverna, where we dine on exemplary Greek calamari and lamb souvlaki.

The next morning, after a hearty trucker’s breakfast at the Eldorado Hotel, we swap the driving seat for a flightseeing tour in a four-seater Cessna over the spectacular Tombstone mountains, landing on the Dempster Highway; because in the Yukon, highways generally have a side job as airstrips. We snowshoe through the deserted, majestic valley; during the summer months, our cheery guides from Klondike Experience offer heli-hiking and mountain bike rental. 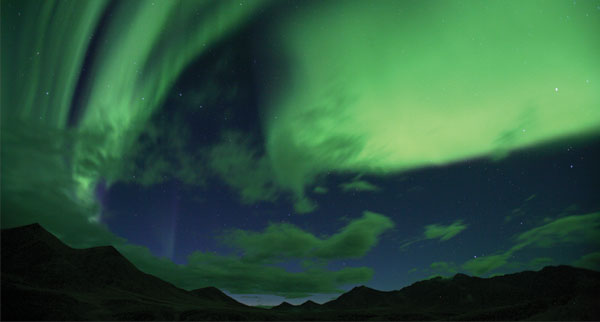 “I get my first glimpse of the northern lights at a combined motel and gas station on the deserted Dempster Highway.”

Our Cessna and guides depart, and now it’s just me, my car and the Dempster, heading north towards the Arctic Circle. Visiting the Yukon in winter means expecting surprises, and a night at the simple but characterful truckers’ pitstop Eagle Plains Hotel turns into one of the highlights of the trip. Spotting an eerie green glow through my bedroom window after midnight, I hurriedly pull on my standard four layers and head outside for a spectacular aurora show. Some visitors to the Yukon see the northern lights from an outdoor hot tub, others at dedicated aurora camps, but I get my first glimpse at a combined motel and gas station on the deserted Dempster Highway, after an evening drinking with ice-road truckers. And I wouldn’t have changed a thing about it. 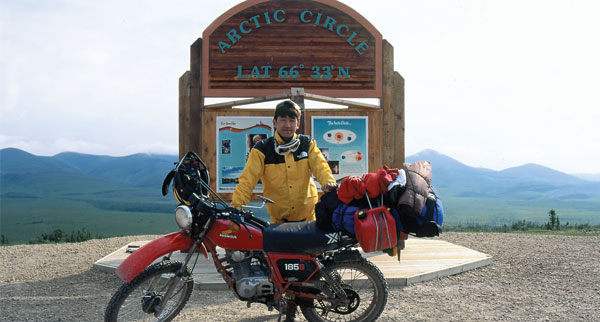 Many road trippers call it a day at the 60th parallel, or the Arctic Circle, but we intend to finish what we started, and the Dempster Highway winds up in the Northwest Territories town of Inuvik. With a population of 3,265, Inuvik is the largest town in the Mackenzie delta, perched on permafrost 125 miles north of the Arctic Circle.

Like Dawson and the Southern Lakes town of Carcross (recently visited by Prince William and Duchess Kate), Inuvik confounds my (low) expectations of a wilderness town, with a close-knit community, lovingly curated Western Arctic Regional Visitor Centre and atmospheric restaurants such as Alestine’s, where Brian and Pam serve reindeer chilli and fish tacos from a daffodil-yellow converted school bus.

Historically, Inuvik has been quite literally the end of the road, the most northerly road-accessible settlement in Canada. This will all change in November, when a new all-weather highway will extend beyond the Dempster to the tiny First Nations community of Tuktoyaktuk (population: 960), who are scrambling to build a campsite – and perhaps even get a cafe – for the road trippers to come. Until now, Tuk has been accessible only by plane or boat in the summer months, or via the ice road that freezes atop the ocean in winter. Now, there is a new north. And if my first road trip is anything to go by, the road to Tuk will take travellers beyond their wildest dreams.

Prestige Holidays has a 14-day Yukon and Alaska self-drive starting at £2,849 for departures in August 2018, including accommodation, economy flights with Air Canada and car hire.
prestigecanada.co.uk