If coastal Cambodia isn’t yet on your radar, it should be, discovers Meera Dattani.

“Can’t wait for my Asia trip, especially Cambodia,” a friend tells me. I’m excited for her; this is a country close to my heart. But alas, it turns out, as it often does, that ‘Cambodia’ for my friend equals three days of frantic Angkor temple-hopping in Siem Reap followed by longer stints elsewhere in Asia.

Angkor aside, Cambodia remains underrated, yet its capital Phnom Penh is one of southeast Asia’s most likeable and easily navigable cities, riverside Kampot is as relaxing as Vietnam’s Hoi An, and nature and adventure lie inland. Then there are the beaches . . .

It’s also the gateway for Cambodia’s off-shore islands, such as Koh Rong and Koh Rong Samloem, where white-sand beaches, clear water and pristine coral reefs are typical of the Gulf of Thailand. The coming months will also welcome Alila and Six Senses, long-awaited alternatives to the well-established Song Saa private island.

The region is firmly on the radar for Turquoise Holidays. Asia product manager Rachel Gleave says: “Southern Cambodia is our number-one emerging beach destination in Asia, in particular Sihanoukville. Once a backpackers’ haven, it’s now heading upmarket and attracting new clientele: ‘flashpackers’ who used to backpack here; big spenders seeking a five-star experience; and people looking for a new take.”

“Cambodia attracts a wide range of travellers: those drawn by cultural wonders such as Angkor Wat; others looking to understand its dark history; and now luxury travellers attracted to its coastline by Song Saa and, soon, Six Senses and Alila.” 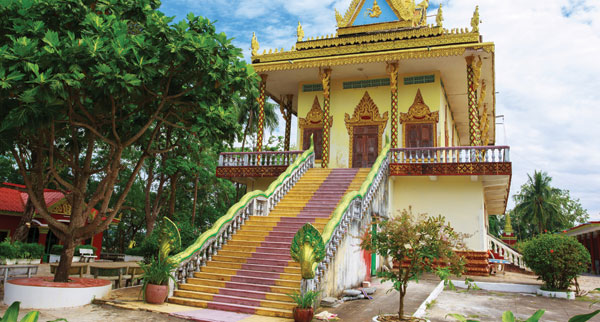 It’s the gorgeous islands that grab the imagination, with most resorts a speedboat ride or slightly longer ferry journey (from 30 to 90 minutes) away from Sihanoukville. The largest is Koh Rong, across the water from smaller Koh Rong Samloem. Diving, snorkelling and beach life are the main lures, but visitors can also enjoy jungle hikes, cookery courses and cultural activities. Island-hopping day trips often take in the more rustic Koh Ta Kiev with its castaway ambience, and several uninhabited islands offer sublime snorkelling.

Sihanoukville may not be the prettiest town but it has its attractions. Downtown, local market Psar Leu is a lively spot, and you’ll get good views over the bay from the hilltop Wat Leu pagoda. Come early evening, enjoy cocktails and barbecues along busy Ochheuteal Beach, a quieter sunset drink on Serendipity Beach, or the more laidback vibe along the beaches of Otres 1 and 2, a few miles away. Inland, Otres Village is gaining a reputation for its excellent restaurants and bohemian vibe.

Mainland day trips include the Kbal Chhay Waterfalls, and the mangroves, waterways and secluded beaches of Ream National Park. Island-hopping, diving and snorkelling excursions are easy to arrange, as are activities such as horse riding, quad-biking, cooking courses and paddleboarding. 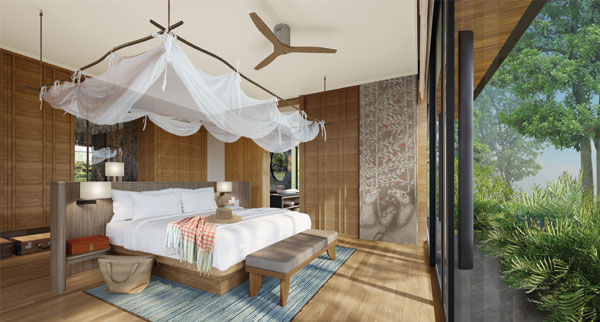 Stay: On the rise

Changes are afoot. For many years, luxury private island resort Song Saa has had the lion’s share of luxury bookings. “Song Saa is a fabulous resort – one to rival anything Thailand has to offer,” says Robin Ball, director of Bamboo Travel. “But it’s at the top end of the price scale. Now, there are a growing number of affordable three-star resorts on Koh Rong and Koh Rong Samloem that we can book as part of a tailor-made package.”

It’s undeniable that Song Saa, off the northeast coast of Koh Rong, was a game-changer. It remains Cambodia’s most luxurious accommodation, mixing a strong conservation philosophy with high-end accommodation.

But two new private island eco-resorts will be opening in 2018 in the Koh Rong archipelago: Six Senses Krabey Island, an all-villa property with private plunge pools, signature spa, and detox and yoga workshops; and the Alila Villas Koh Russey, with a kids’ club, 50 suites, and 13 villas with butler and chef service. As Kate Edwards from Jacada Travel says: “Cambodia is a destination in its own right, and because of that, we’re seeing brands like Alila and Six Senses here, which place an emphasis on opening in beautiful locations. It’s also positive to see Cambodia attracting leaders in sustainable travel.” 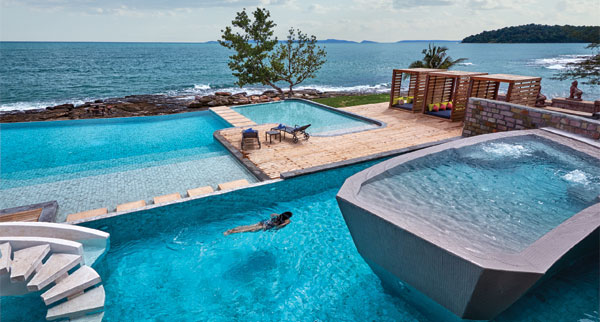 Luxury aside, good-quality, boutique options are also on the rise. On Koh Rong, busy Koh Toch town is best avoided – although quieter Long Set Beach, farther up, is a good bet – but Sok San Beach Resort on the island’s west coast is the top pick, boasting chalets and villas on a lovely stretch of beach. South of Koh Rong is smaller Koh Rong Samloem, home to a growing number of properties along Saracen Beach.

In Sihanoukville itself, consider the stylish 1960s art deco-style Dara Independence Beach Resort & Spa on quieter Independence Beach. Cambodia’s first luxury hotel, it was built during the country’s post-independence ‘Golden Era’ and counts Jackie Kennedy among its guests, before the Khmer Rouge occupied it during their brutal regime in the 1970s. An architectural icon once again, the revamped property includes a new restaurant and two new pools.

Four miles east are the beaches of Otres 1 and 2, with quieter Otres 2 attracting boutique hotels such as Naia’s stylish minimalist design, Ren Resort, and Tamu with its fine-dining restaurant. A mile or so inland, Otres Village’s restaurants, Saturday evening market and artsy vibe are appealing. Previously attracting budget and mid-range accommodation, boutique riverside property Sok Sabay and other luxury bungalow resorts now add to the mix. 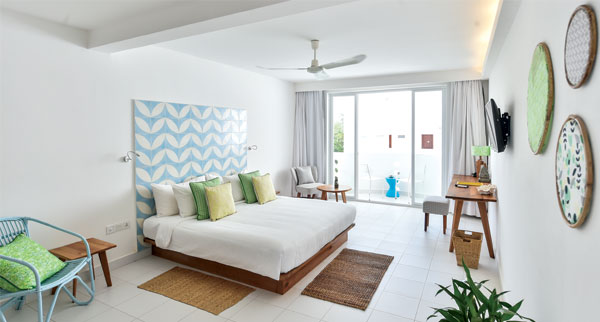 Getting to Cambodia has never been easier. Emirates’ new London-Phnom Penh route via Dubai is a great boon, and improved roads connect the capital to the coast in three hours. Domestic and regional carriers connect Sihanoukville to Siem Reap and other hubs, such as Ho Chi Minh City, and Thai Air’s Bangkok-Sihanoukville route begins in December. Last year also saw a Cambodian railway revival, with the Phnom Penh-Sihanoukville line (weekends only) reinstated. Sihanoukville’s airport is less than half an hour from town, where speedboats whisk guests off to the islands.

Agents currently selling Song Saa will welcome the arrival of luxury proerties Six Senses and Alila. While the rapid development along the country’s coastline and islands comes with mixed blessings, it’s putting Cambodian beach life on the cards – and makes a complete holiday in Cambodia much more viable.

Turquoise Holidays offers 10 nights from £3,885, with four nights in Siem Reap and six nights in a Jungle Pool Villa at Song Saa, including breakfast, three excursions in Siem Reap, and international and domestic flights.
turquoise holidays.co.uk