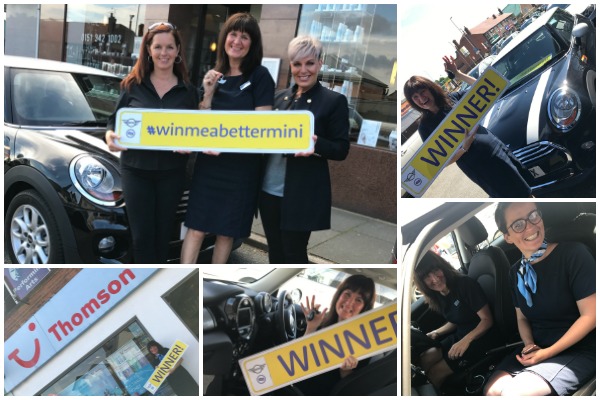 Thomson agent Charmione Lloyd has picked up the keys to the Mini she won at this year’s Travel Weekly Agent Achievement Awards.

At this year’s awards ceremony, at Park Plaza Westminster Bridge in London, she was one of the two best guessers of the number of plastic balls pictured inside the Mini Cooper D and went on to be the closest to completing a giant jigsaw puzzle of the Holiday Extras logo in front of the crowd.

The agents on stage had been plucked from a draw into which they were entered every time they made Holiday Extras bookings.

Charmione, who works at the Thomson store in Heswall, Merseyside, said: “I still can’t believe it. I feel really special in the Mini, I love it. It’s an upgrade from my old Fiat which was a bit of a bean can.”

She said the finale of the competition at the AAAs was “like a dream” but that she was determined to take the Mini home after she got as far as the stage. “When we were doing the jigsaw I couldn’t tell who was closest but I just really wanted to win,” she said. “I’ve won fam trips before but you never meet anyone who’s won a car.”

James Lewis, head of partnerships at Holiday Extras said:  “We are delighted Charmione won the mini. She has always been a big supporter of Holiday Extras. It was a delight to deliver the car to her and see the look of joy on her face. I have been very pleased with the response of the Win Me a Better Mini campaign this year, we saw a strong increase in bookings over the period which has continued since.”