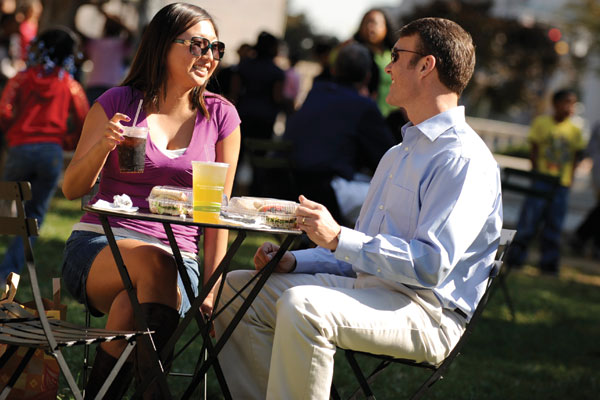 When your nearest neighbour is the nation’s capital, seizing your share of the spotlight is always going to be tricky. But Baltimore is doing just that.

It’s surprisingly easy to get to, with direct flights to Baltimore/Washington International Thurgood Marshall airport by scheduled carriers including no-frills airlines such as Wow Air.

And at only an hour’s drive from Washington DC, many visitors combine it with a trip to the capital – one of the reasons visitor numbers have rocketed in recent years. The city has seen some serious investment too, which has kick-started a transformation to put this little charmer firmly on the map.

Baltimore is just under 40 miles north of Washington DC, and easily reachable via road or rail. Alternatively, customers can fly direct from the UK, or to Dulles International airport, which is 60 miles away.

Recent investment from various sources, including Kevin Plank, the Baltimore-born founder of sportswear brand Under Armour, has helped dispel some of the misconceptions about the city fuelled by hit TV series The Wire, which didn’t exactly cast it in the best light.

This is also a place with a fantastic culinary scene. Seafood reigns supreme, and some of the best can be enjoyed at Phillips Seafood, a historic restaurant on Baltimore’s schooner-filled waterfront. Places are set with hammers, not cutlery, and crabs are ordered by the dozen.

It’s a great people-watching spot: alongside hammer-wielding students washing their crab suppers down with huge steins of beer are families, couples and ladies who lunch, digging out the soft crab flesh with manicured fingernails. 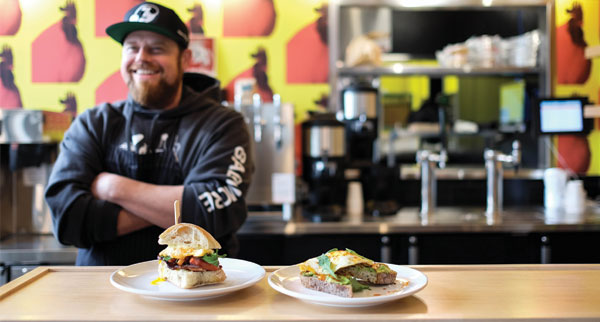 Baltimore is heaving with monuments, including the US’s first Washington Monument, which towers above the park-filled Mount Vernon neighbourhood – clamber up the 227 steps for spectacular views over the city.

And while the original star-spangled banner might reside in nearby DC, it was first raised above Baltimore in 1814, during the War of 1812. The British had taken Washington DC and were bearing down on Baltimore, but 12,000 American soldiers lay in wait at star-shaped Fort McHenry. On September 14, after a night of fierce fighting, a star-spangled banner was raised by the triumphant Americans. Lawyer Francis Scott Key watched the scene unfold and jotted down his thoughts, and his words became the national anthem.

Fort McHenry, overlooking the Patapsco River, is one of Maryland’s most popular attractions. Visit the high-tech visitor centre before looking around the original fort – don’t forget to peek inside the original (and shockingly cramped) soldiers’ barracks. They surround a huge flagpole, and every morning a huge star-spangled banner is unfurled and raised, usually with the help of younger visitors.

Fell’s Point, to the north, is Baltimore’s oldest neighbourhood. This waterfront area was once home to the factories that churned out the famous Baltimore clippers in the 18th century, and was famous for the ‘three Bs’: boarding houses, bars and brothels.

“Fell’s Point was home to the factories that churned out the Baltimore clippers in the 18th century.”

These days, visitors wander down its tree-lined side streets to admire the pastel-hued houses and beautiful brick mansions once owned by ships’ captains, or head to one of the wood-panelled pubs for some locally caught oysters. The Horse You Came In On is a welcoming tavern that the owners claim was a regular haunt of Edgar Allan Poe.

To find out about more about Fell’s Point, sign up for one of Baltimore National Heritage Area’s free walking tours, which run between April and November.

Like much of Baltimore, Fell’s Point is in the midst of a transformation. Where the derelict shipyard once stood, there is now a five-star hotel, the 128-room Sagamore Pendry Baltimore, which boasts priceless artworks and even a canon discovered during excavations. 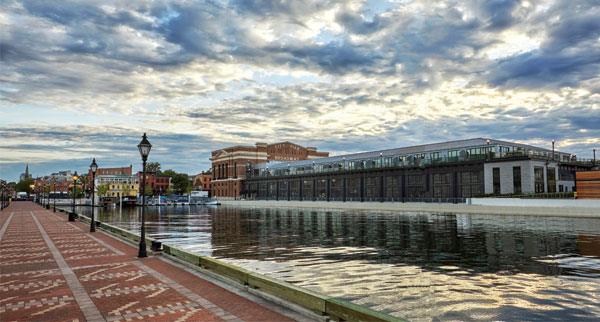 The once-gritty neighbourhood of Remington has become popular with creative types seeking cheaper accommodation, and new businesses are flinging opening their doors.

Take the recently opened R House, a stylish food hall that doubles as a launch pad for the latest food concepts. Current tenants include Hilo, specialising in Hawaiian poké, and Stall 11, which serves produce grown in hydroponic gardens. For dessert, try Blk//Sugar, where you can order pizza-flavoured ice cream and charcoal brownies.

One area that has already completed its regeneration is Hampden. This northern neighbourhood was first settled by the city’s mill workers; today, it’s Baltimore’s hipster district. Highlights include Atomic Books, which specialises in graphic novels and comics. There’s also a fantastic selection of quirky toys and books (How to Talk to Your Cat about Gun Safety, anyone?) and some wonderfully retro sticker machines.

When hunger strikes, head to The Food Market, a restaurant known for its American-inspired fine dining. If you’re stuck for what to order, the pistachio-crusted lamb rack won’t disappoint. 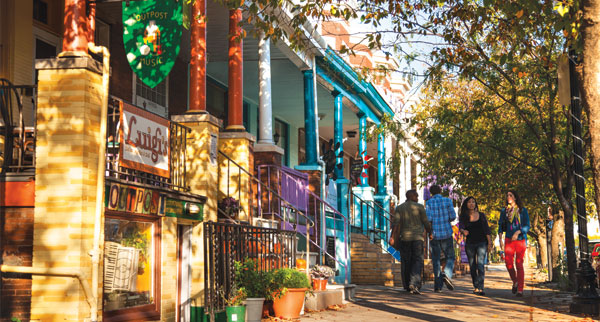 The Sagamore Pendry Baltimore is one of the reasons growing numbers of visitors are making a beeline for Fell’s Point. Stay here and you’ll get direct access to the new water taxi service (another initiative from owner Kevin Plank), which puts the rest of the city within easy reach.

Downtown, try the Kimpton Hotel Monaco Baltimore Inner Harbor, a beautiful, dog-friendly hotel in one of the city’s oldest buildings (doubles start at £122). The Royal Sonesta Harbor Court Baltimore (doubles from £354), which is famous for its crab meat-infused bloody marys, is another great city-centre option. It’s just a short walk to the Inner Harbor, which is where you’ll find major attractions such as the National Aquarium, Ripley’s Believe It Or Not and the USS Constellation, the last sail-only warship designed and built by the United States Navy.

There’s plenty more choice in the waterfront areas of Baltimore, but hotels are starting to spring up in hip up-and-coming neighbourhoods such as Remington. Here, most properties are close to Johns Hopkins University. One of the closest to the campus, Inn at The Colonnade Baltimore, a DoubleTree by Hilton property, has doubles from £102 per night.

Fly from Gatwick to Baltimore/Washington with Wow Air, via Reykjavik, from £180 one-way
wowair.co.uk