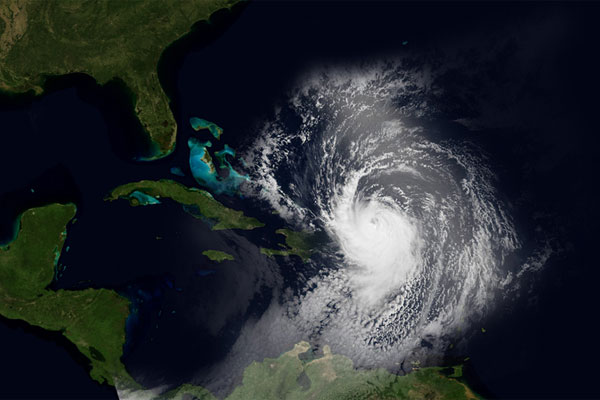 British travellers are being advised against all but essential travel to Dominica after the Caribbean island was devastated by deadly Hurricane Maria.

The warning came in updated Foreign and Commonwealth Office travel advice which also said that parts of Martinique and Guadeloupe had suffered damage as the major storm swept through.

The updated travel advisories were issued as Hurricane Maria knocked out all power on Puerto Rico, home to 3.5 million people.

The hurricane, weakened to a category two storm, is moving away from the US territory and heading towards the Dominican Republic.

Thomson delayed flights due to depart from Gatwick and Manchester yesterday and today to Punta Cana in the Dominican Republic until Friday.

Hurricane Maria forced Thomas Cook to postpone a flight due to depart from Punta Cana yesterday until later in the week “once it is safe to do so”.

The US National Hurricane Centre said Maria was projected to pass north of the Dominican Republic and then move on to the Turks and Caicos Islands and south-eastern Bahamas.

The hurricane previously battered St Croix in the US Virgin Islands as a category five storm carrying sustaining winds of up to 175mph.

The devastating storm left seven people dead on Dominica, which was badly affected on Monday.

The Florida-Caribbean Cruise Association is liaising with Royal Caribbean to co-ordinate relief efforts in Dominica.

“If you’re in Dominica, you should exercise caution and follow the advice of the local authorities.”

Maria is the second devastating storm to hit the Caribbean this hurricane season – the first being category five Irma earlier in September. Maria began moving roughly along the same track as Irma.

The back to back hurricanes triggered cruises lines to mobilise relief efforts in addition to making donations to help support rebuild tourism facilities on affected islands.

A spokesman for the Florida-Caribbean Cruise Association said: “Through the assistance of our destination partners, Norwegian Cruise Line and Royal Caribbean, we coordinated the evacuation of nearly 1,000 stranded visitors and displaced residents in St Thomas on Norwegian Sky, along with the evacuation of 1,700 people in St Thomas and St Maarten on Adventure of the Seas and Majesty of the Seas.

“Our member lines have also used these ships to provide supplies, with Norwegian delivering 35 pallets of supplies to St Thomas; Royal Caribbean bringing more than 20 pallets of medical supplies, 5,539 gallons of water, 7,831 gallons of milk, 4,200 rolls of toilet paper, 67,500 garbage bags and 13,050 pounds of animal supplies; Disney Cruise Line donating meals and bedding and providing storage for supplies and power-utility vehicles; and Carnival Cruise Line planning to use 11 ships to bring supplies – all this on top of the industry’s commitment of about $15 million for donations toward relief efforts.”

The association’s president Michele Paige said: “I wish words could bring back the lost lives, rebuild the catastrophic damage and support people physically and emotionally in this time of need, but there are no words.

“However, the FCCA is fully committed to taking every possible action to help our partners during this tragedy, as they are not just our partners, but more like our family.”

Hurricane Irma: Royal Caribbean ‘back to business as usual’

Hurricane Irma: BA Caribbean and US flights return to normal