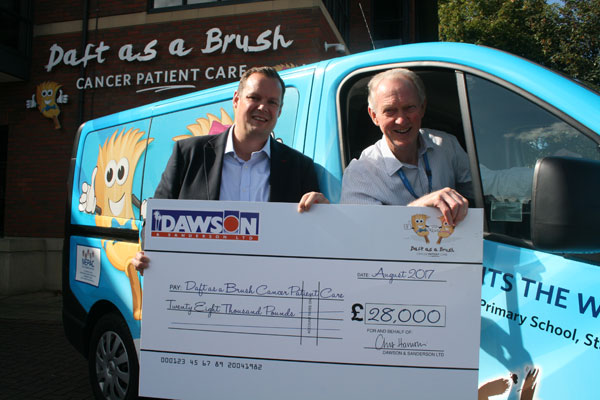 The firm, which has 22 branches across the region, set out to raise £20,000 for the Daft As A Bush Cancer Patient Care.

The charity provides free transport service for patients across the north of England.

After a year of zip wire runs, sponsored walks, cake bakes and golf days, Dawson & Sanderson managed to raise more than £28,000 for the Gosforth-based charity.

Chris Harrison, managing director of Dawson & Sanderson, said: “We are completely taken aback by the final figure which is way above the target we set.

“Our staff and customers really got behind the appeal and it’s a huge privilege to be able to hand over the cheque.

“The golf day at Longhirst Hall raised almost £7000 while our amazing staff collected more than £4000 from a series of sponsored walks along Hadrian’s Wall.

“This was a brilliant team effort from everyone who took part in this demanding walk some of whom literally walked the soles off their boots.”

Backed by a team of some 320 volunteers, www.daftasabrush.org.uk was set up by former entrepreneur and businessman Brian Burnie who gave away his fortune to establish the charity.

Over the last seven years, it has gone from two ambulances to 25, providing more than 30,000 patient journeys a year.

Daft As A Brush has also expanded into transporting children and their parents to hospitals across the north.

Harrison added: “It’s an amazing charity with such an inspiring story to tell and a real credit to the North East.

“I am thrilled that both our staff and customers have shown genuine affection and support for Daft As A Brush over the past year.”

Daft As A Brush founder Brian Burnie said: “It’s fantastic that Dawson & Sanderson has decided to help us in this way and very much appreciated.

“The firm is a well-established North East brand and like ourselves is proud to support the people and communities of the region.

“On behalf of everyone at Daft As A Brush, I thank them all from the bottom of my heart for their support.”