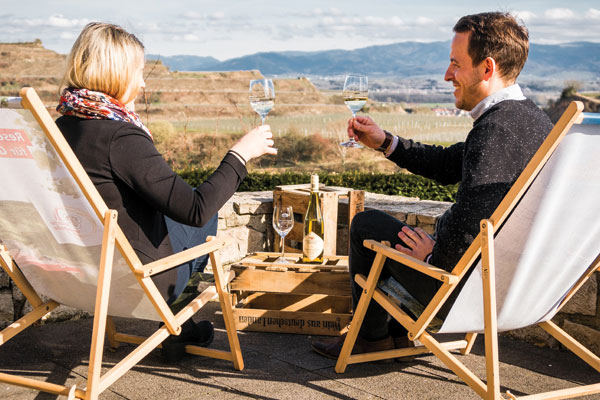 In a cafe in a cobbled square, I raise a toast to Freiburg, nestled in the heart of the Black Forest. It’s a town set against forested mountains, filled with cobbled streets and gabled beer houses.

The fizz in my glass is Wier, a locally produced tipple made with beer and wine. Strangely – but like most things in Germany – it works, reflecting the area’s culinary diversity as well as its status as one of the country’s top wine-producing regions.

Nearby, children float wooden boats down the waterways that line Freiburg’s main streets. These narrow channels, just a few inches in width, were built during the 13th century, when houses were made from wood (most still are). The channels brought water from the surrounding hills, should fire break out.

With its beer houses and tilting townhouses, Freiburg feels wonderfully historic, although a large student population makes it one of the area’s liveliest towns. There are 32,500 students at the University of Freiburg, which was founded in 1457, initially as a specialist school for pathology. Though this particular faculty can now be found on the outskirts, as +locals insisted on its relocation after pointing out that Germany’s sweltering summers magnified the stench of the rotting corpses kept by the pathology department.

Apart from the (thankful) removal of the pathology department, the town’s Altstadt (old town) has been wonderfully preserved. 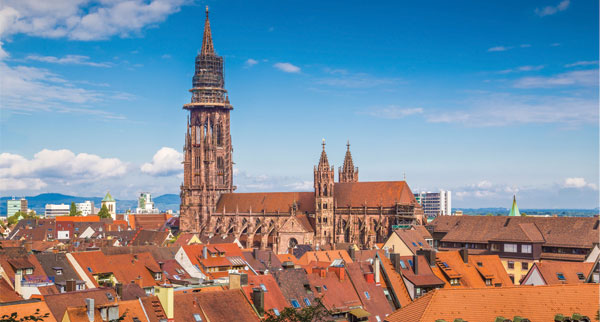 Although there are plenty of beer gardens – my favourite was Hausbrauerei Feierling, a tree-filled courtyard attached to the brewery it’s named after – reminders of the area’s connections with wine are everywhere; there’s even an urban vineyard next to my hotel, the Park Hotel Post.

I also develop a soft spot for the town’s many delis, serving delicacies such as locally made walnut pesto and beer marmalade.

In Freiburg’s town square is Freiburg Minster, a beautiful cathedral with the most colourful stained glass I’ve ever seen. During the Second World War, the glass was removed and placed into storage, before being refitted once the bombs stopped falling.

In fact, the entire building was one of the few to remain unscathed. But its survival wasn’t simply down to the fact that it didn’t take any direct hits. Nearby buildings crumbled under the pressure of shockwaves produced by the bombs, but the unique design of the spire – an ornate perforated, latticed design – allowed the shockwaves to pass through. Climb to the top of the cathedral for beautiful views over the town and the hills beyond.

But I opt for a different viewpoint, from nearby Schlossberg hill, which towers over the town. A cable car takes me to the peak, where I enjoy dinner at the Dattler, a hilltop restaurant that dates back to 1882 and is famous for its apple pie.

I choose to walk back to the city centre, grateful that we opted for the gondola on the upward leg. It’s a hot day, although nothing unusual for Germany’s hottest region.

Germany’s love of precision means that getting to neighbouring villages and towns is easy, thanks to an extensive rail network that connects the tiniest of villages.

Our first stop is Hinterzarten, a beautiful commune filled with hikers, cyclists and Alpine-style chalets hiding behind flower-filled window boxes. I hike through meadows of wildflowers and past quaint shepherds’ huts, the only noise being the odd gasp from an exhausted hiker.

“Hiking through meadows of wildflowers and past sheperds’ huts, the only noise in the odd gasp from an exhausted hiker.”

Occasionally we hear an electric whir as a Lycra-clad cyclist overtakes us. Bikes aren’t the only electric form of transport – electric cars are popular, too. Tourists who stay for two or more nights in the Black Forest receive a Red Inclusive Card. This region-wide discount card provides free access to more than 70 attractions and a free test drive in an e-car. Since 2015, these vehicles have been dotted across the Black Forest, creating the world’s first rural e-car sharing scheme. 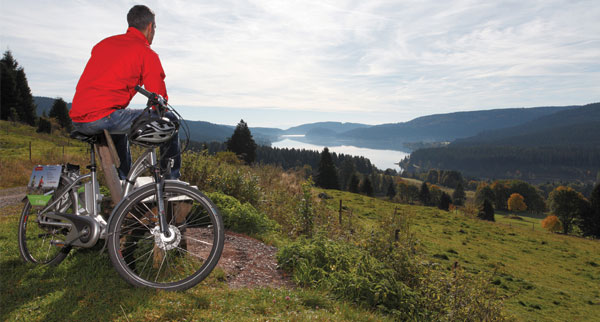 But remain within the confines of a car and you’ll miss the Black Forest’s best bits – the tapping of woodpeckers and the rich smell of fragrant herbs. I learn more about the latter from Josef Fehrenbach, owner and head chef of the Waldhotel Fehrenbach, on the outskirts of Hinterzarten.

With his untamed hair and equally untamed passion for local ingredients, Fehrenbach has something of the mad scientist about him. He leads us into his sprawling garden and plucks fragrant sprigs of nettle and comfrey, passing them to me to smell and chew. Later, he tears a huge dark-green leaf from a bush and tells me to place it in my shoe; sure enough, my feet instantly feel cooler.

Our alfresco lunch features his favourite ingredients: a mushroom soup and flower-adorned salad drizzled with a nettle-based dressing. I skip dessert knowing that I’ll soon be sampling another local delicacy: Black Forest gateau.

Proof in the pudding

At Café Schnapshäusle, in nearby Feldberg, shelves heave with hand-painted crockery and the queues for the legendary cakes snake out the door. Downstairs, a kitchen has been turned into a demonstration area, where visitors can watch employees squeeze perfect curls of fondant out of icing bags and sandwich the famous cake’s layers together with the help of the potent, cherry liqueur-infused filling. 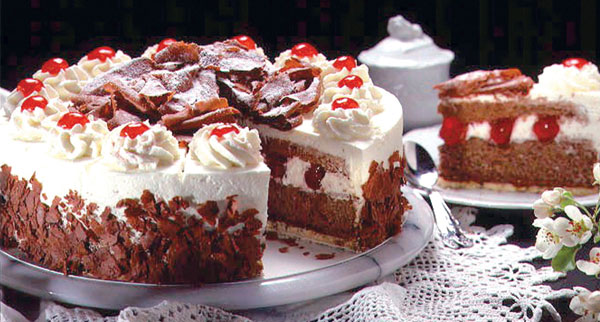 After gorging on the result, I head to nearby Lake Titisee and wander around the sandy shore. It’s a popular summer resort, fringed with hotels and cuckoo-clock shops. Children’s legs spin like windmills as they float across the water in pedalos, and every so often, I hear a steam engine along the track on the opposite shore, the mournful blasts of its horn bouncing off the water.

The next morning, I hop on a bus to the base of the Feldberg, the country’s highest mountain outside the Alps. A gondola whisks me to the top, where a maze of walking trails fans out across undulating terrain, resembling the Tyrolean setting of The Sound of Music, complete with booming cow bells and colourful wildflowers. On a clear day, you can see Mont Blanc. My leisurely pace leaves me in the wake of the lightning-fast hikers who march steadfastly along the trails.

“A maze of walking trails fans out across undulating terrain, resembling the Tyrolean setting of The Sound of Music.”

But it’s been 48 hours since I last had a drink – something of a feat in the alcohol-soaked Black Forest. So I head to Breisach, a small town surrounded by volcanic hills. With a climate similar to France’s Loire valley and Champagne province, this area is famous for its wine production. 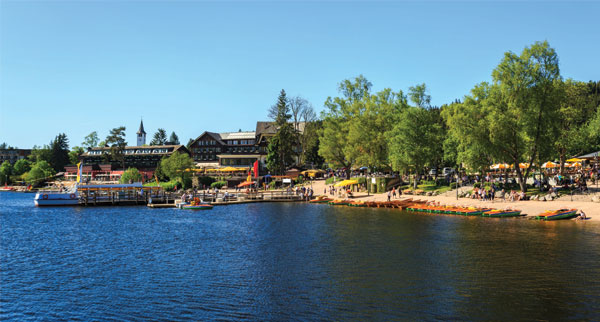 Badischer Winzerkeller is one of Europe’s largest wineries. On one of the regular guided tours, I wander through the production room and gawp at the enormous vats, each of which holds 1.2 million litres of wine.

Almost 500 different wines are produced here, but despite its size, the winery hasn’t lost touch with its past. Travelling through the underground cellars on a miniature train (yes, the place is that enormous), we pass though the archives, filled with parchment-wrapped bottles produced hundreds of years ago. The tasting room is in the wooden barrel cellar. The enormous casks have been adorned with beautiful carvings depicting scenes from the Black Forest’s past, and it’s the perfect place to raise a toast to this beautiful part of Germany. Prost, Freiburg.

Find out more at blackforest-tourism.com

Kirker Holidays offers a three-night break to Freiburg, including accommodation at the Hotel Zum Alten Bären, flights to Basel and car hire, from £779 per person.
kirkerholidays.com

Inntravel offers an eight-night, self-guided A Walk in the Black Forest holiday from £1,050 per person. The price includes two nights in Freiburg at the Hotel Oberkirch, six dinners, two picnics and travel on local buses and trains. This holiday operates between May and October.
inntravel.co.uk

“One of Europe’s most beautiful regions, yet little known in the UK, the Black Forest is beginning to attract discerning travellers drawn to its elegantly preserved towns, unspoilt nature and enviable gastronomic reputation. From historic Freiburg, to the cultural hotspot of Baden-Baden, the Black Forest is far from the stereotypical German landscape.”

“The name Black Forest is more likely to conjure up images of dark uninviting woodland, but this couldn’t be more wrong, as it has beautiful rolling hills and quaint villages. There are so many lovely drives, spectacular train rides and fantastic well-marked walking trails that you can spend a couple of weeks there and not get bored.”