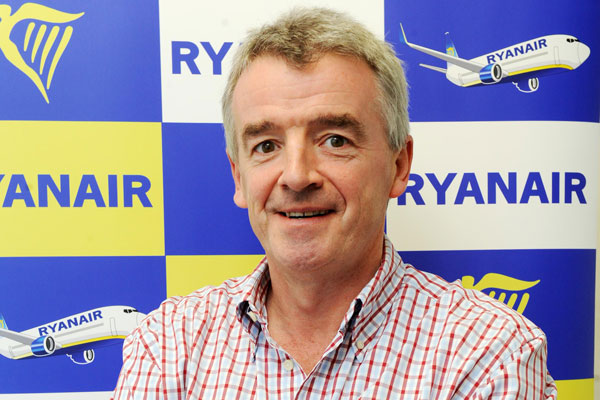 Ryanair pilots have been urged not to quit the airline in a plea from chief executive Michael O’Leary.

He promised a raft of changes including improved pay and conditions to get them to remain with the airline following the “mess up” to pilot rotas which led to 2,100 flights being cancelled in September and October and a series of routes being withdrawn for the winter with the grounding of 25 aircraft.

In a letter seen by the Irish Independent, O’Leary implored his 4,200 pilots not to leave to join rival airlines such as Norwegian.

“If you have, or are considering joining one of these less financially secure or Brexit-challenged airlines, I urge you to stay with Ryanair for a brighter future for you and your family,” he said.

The appeal comes amid a grassroots movement among Ryanair pilots to unionise in order to seek better employment conditions and pay.

O’Leary also sought to clarify comments he made about pilots following the company’s annual general meeting two weeks ago.

He insisted that his comments were “misreported”.

The airline chief said after the AGM that pilots had a steady job except in adverse weather conditions or during air traffic control strikes.

He said that Ryanair pilots only worked an average of 18 hours a week and that most of the time they could get in an aircraft and hit autopilot and often have little else to do.

“I emphasised (as I always do), that Ryanair’s pilots are the best in the business, who work hard, are well trained and extremely professional,” he said in yesterday’s letter.

“I am proud of your skill and experience, operating across multiple airports, especially during bad weather.”

O’Leary claimed that critical comments he made were “specifically directed” at pilots of competitor airlines and their local unions “who take every opportunity to criticise and denigrate Ryanair, our pilots, our safety, our operating performance and our business model despite our collective 30-year success”.

He added: “My criticisms of these competitor pilots and their false claims are valid. Just witness the recent bankruptcies of Air Berlin, Alitalia and Monarch.”

Norwegian has hired 140 Ryanair pilots since the start of the year.

O’Leary claimed Ryanair pilots will see “significant changes to, and investment in our rostering and pilot career development” over the next six months at the airline.

“Our chief people officer, Eddie Wilson, has now taken direct control of our pilot recruitment and rostering functions,” he said.

He added that pilots would soon be informed of “significant improvements to your rosters, your pay, your basing, your contracts and your career progression”.

He pledged to benchmark pilot pay against that of Boeing 737 pilots in Norwegian and Jet2, and intends to exceed what those airlines pay.

He also promised other financial measures.

Hundreds of Ryanair pilots have joined unions over the past two weeks following the rostering failure that saw the airline cancel thousands of flights.

Many of the pilots are unhappy with their employment terms and conditions, as well as pay.