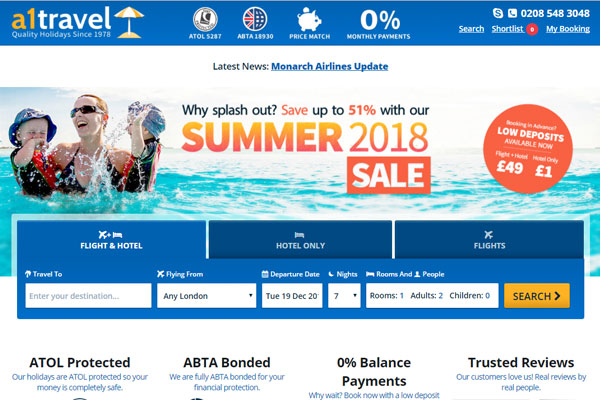 A1 Travel parent Chadwell Travel is said to have been a victim of the collapse of Monarch Airlines when the agent ceased trading last week.

The Romford-based agent, which had an Atol for 100,000 passengers a year, collapsed on Friday afternoon with 6,000 forward bookings and several thousand clients overseas.

The CAA appointed Broadway Travel to rebook customers still to travel on Atol-protected holidays, and all customers abroad were able to complete their holidays.

A well-placed source said the failure was caused by costs associated with having to rebook customers who had lost their flights when Monarch collapsed at the beginning of October.

It is understood some agents either did not have supplier failure insurance or found their policies offered insufficient cover following the Monarch collapse.

Alan Bowen, legal adviser to the Association of Atol Companies, said: “If you have a policy that pays for replacement flights, you should not lose any money.

“There may be other failures like this. But this will be the first time a lot of people have realised there is a risk airlines can go bust, and that when they do, and you’ve sold them as Flight-Plus, you are responsible and there is no way out of it.”

Andy Cohen, the CAA’s head of Atol, said: “Chadwell Travel is a long-established business, so our thoughts go out to all those who worked for the company.

“However, I am pleased to say we have agreed with our fulfilment partner, Broadway Travel, that the majority of Atol-protected customers will be able to have their well-earned holidays as planned.”

The CAA said some customers who had holidays booked through Chadwell Travel with a Monarch flight may not be able to travel if alternative flights cannot be found. It said they could claim under the Atol scheme.

A1 Travel was part of the Holidaychecker Group, which was set up in 2004 and owned 100% of the shares in Chadwell Travel.

A1 Travel was a member of Abta and primarily sold Mediterranean holidays to Spain, Greece and Turkey. It also sold a small number of long-haul holidays.

Its Essex headquarters was supported by a call centre in India.

As well as A1 Travel, it traded as Bargain Holidays Online, Big On Holidays and Premier Leisure.

• Broadway Travel was appointed by the CAA to rebook clients still to travel on Atol-protected holidays.

• Monarch Airlines’ failure was blamed for the collapse. It meant Atol-licensed agents incurred the cost of rebooking clients who lost flights.