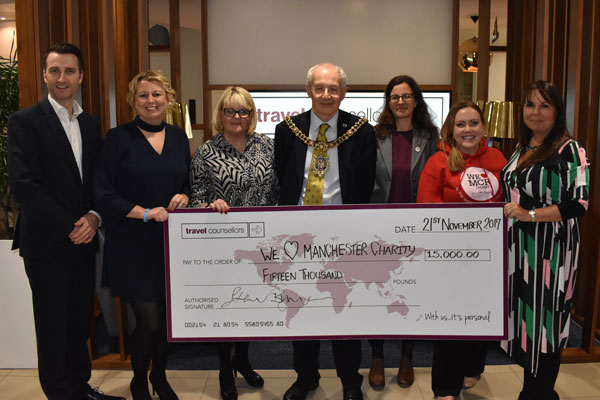 Travel Counsellors has donated £15,000 to families affected by the Manchester bombing.

The company matched the £6,500 sum raised by its franchisees at its annual conference held at Manchester Central, as well as adding a further £2,000 donation.

The donation was handed over to The Lord Mayor of Manchester, councillor Eddy Newman, at the firm’s Manchester office, as part of an official visit.

The money will go to the We Love MCR charities, divided equally between the Emergency Fund and the general Lord Mayor’s Charity.

The firm’s conference was opened by Parrs Wood School choir, who performed at the One Love Manchester memorial concert for the victims of the Manchester Arena bombings.

The We Love MCR Emergency Fund supports the bereaved families and the people injured in the Arena attack.

Kirsten Hughes, UK managing director at Travel Counsellors, said: “Every member of our Travel Counsellors team was shocked to the core following the events at the Manchester Arena, with some personally affected by the tragedy. In the months since the attack, the city has shown its resilience and solidarity, supported by fantastic charities like We Love MCR.”