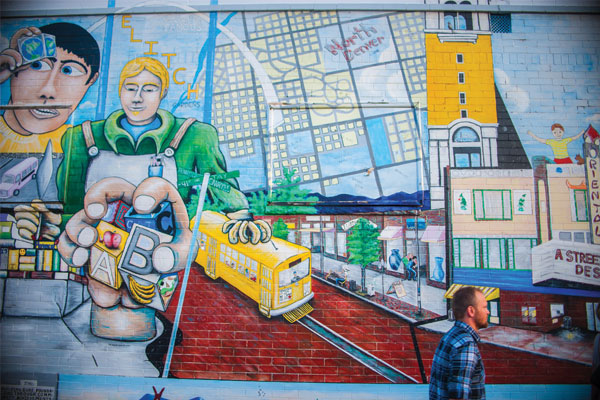 Colorado’s Mile High City is more than a gateway to the Rockies, finds Ella Buchan.

Cradled by the craggy palms of the Rocky Mountains and the High Plains, Denver feels crisp and clean, even on a hot day.

Many visitors leap straight to those mountain ranges, drawn by their snowy peaks, forest, alpine lakes and promise of adventure.

But the host city for IPW 2018, the international trade show in May dedicated to all things American, has gained a reputation as one of the country’s coolest cities. Food stalls and chef-driven restaurants occupy warehouse spaces; street murals brighten alleyways; and vibrant neighbourhoods overflow with craft breweries and cute boutiques.

Norwegian launched direct flights from London in September 2017, and the hotel scene is booming in response to demand from business and leisure tourists.

Here’s how to spend two days in the Mile High City. 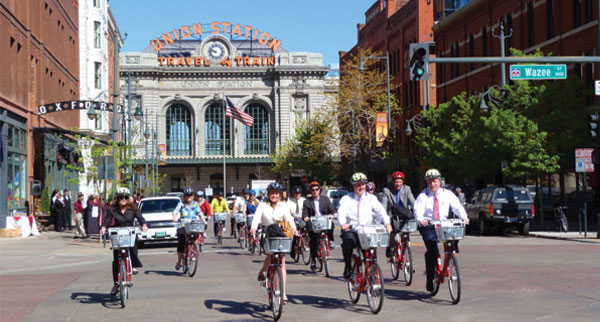 08.30: Grab a bike from the B-cycle kiosk outside Union Station, a beaux-arts building housing bars, shops and restaurants in the heart of downtown. Rental starts at £6.50 for 24 hours. Turn right on Wynkoop Street to hit Cherry Creek Trail, and follow the tree lined creek southeast for three and a half miles.
denver.bcycle.com

09.00: Leave the trail at East 1st Avenue, looping left on Gilpin Street and heading north for around a mile to reach Denver Botanic Gardens, entry £9.50. Dock the bike at the York Street entrance and wander around ornamental ponds dotted with lily pads, and gardens blooming with exotic flowers.

The ‘green’ roof above Offshoots Cafe is carpeted with native species and offers views across the city to the Rocky Mountains.
botanicgardens.org

11.00: Walk a mile south to Cherry Creek North, home to several blocks of chic boutiques and designer stores including Kate Spade and Hermés. Artisan Center has locally made jewellery, pottery and stationery, while each handcrafted bonbon at Victoria’s Chocolates is a work of art.
artisancenterdenver.com
victoriaschocolates.com

12:30: Grab lunch at Cherry Cricket, a popular locals’ hangout on 2nd Avenue. Burgers, from bison to black bean, are the main attraction, from around £5.
cherrycricket.com

14.00: Take a bus or taxi to the Golden Triangle Creative District, a walkable, photogenic neighbourhood filled with museums and galleries near the golden-domed Colorado State Capitol. Don’t miss the ‘Love This City’ mural, which pops in pink and spearmint.

Begin an afternoon’s museum-hopping at the History Colorado Center (£9), where you can (virtually) ride a Model T and explode dynamite in an 1880s rock mine.
historycolorado.org 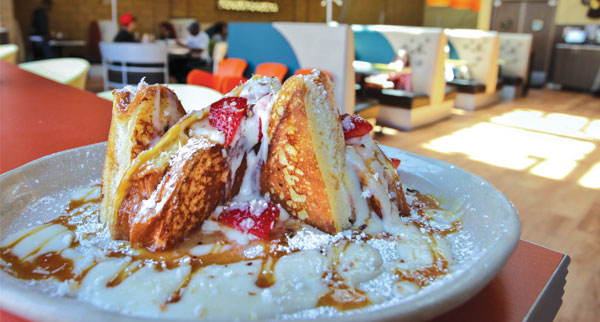 15.30: Step inside the sleek, steely angles of the Denver Art Museum (£7.50). Permanent collections of American-Indian and Pre-Columbian art are joined by world-class photography and sculptural exhibits, spread over six floors in two buildings.

Next door, the Clyfford Still Museum (£7.50) houses the vast majority of works by the influential artist, a founder of abstract expressionism in the wake of the Second World War.
denverartmuseum.org
clyffordstillmuseum.org

19.00: Home to Amtrak and a regional transport hub, Union Station is also a buzzing entertainment complex dotted with plush sofas like a particularly grand, elegant living room. Start your evening with cocktails at Cooper Lounge, tucked on a mezzanine level above the station’s Great Hall.
cooperlounge.com

20.00: It’s a 10-minute stroll to twinkly Larimer Square, with lights strung between the Victorian buildings. The oldest commercial block in the city, it’s home to some of the hottest bars and restaurants. At sleek yet cosy Rioja, seasonal ingredients sing in dishes such as octopus wrapped in serrano ham and artichoke tortelloni in a white truffle-infused broth.
riojadenver.com 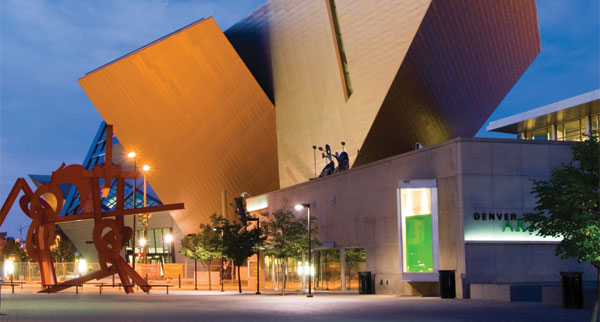 10.00: Set in Union Station with brightly coloured tables spilling outside, Snooze is a local institution whose huge breakfasts and fluffy buttermilk pancakes attract queues. Dishes like steak and eggs benedict and breakfast tacos (£10) make it worth the wait.
snoozeeatery.com

11.30: Potter around the art galleries and shops of LoDo (Lower Downtown). Rockmount Ranch Wear on Wazee Street, a five-minute walk from Union Station, is museum and shop in one. Founder Jack A Weil invented the snap-front western shirt in 1946. Browse racks of classic denim and checked shirts, cowboy boots and belts, before heading upstairs to view original clothing in glass cabinets and photos of celebrities wearing the gear.

13.00: Turn left down Wynkoop Street and right on 15th Street to reach the Museum of Contemporary Art (£6). Exhibits change frequently, while the gift shop has whimsical posters, collectible books and quirky jewellery.
mcadenver.org 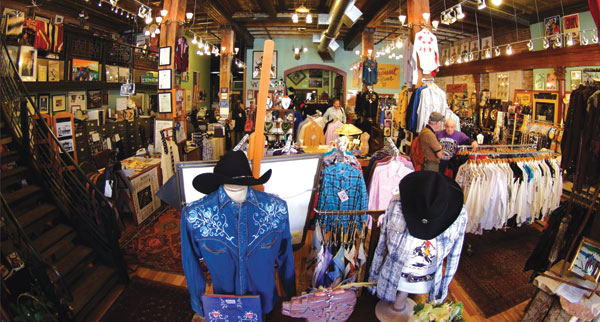 15.30: Almost every brick, pillar and groove of corrugated iron in this warehouse district is enlivened by street murals, some commissioned by the city and local businesses. Strolling down the alleyway between Larimer and Walnut Streets is like straddling two rainbows. This public gallery, stretching several blocks, is a popular backdrop for fashion shoots.

16.00: Turn left at 26th Street for First Draft Taproom. With a self-service pouring system and 35 taps, it’s a great place to sample Denver’s famous craft beers. There are several breweries within walking distance, including Ratio Beerworks and Beryl’s Beer Co, which specialises in barrel-aged brews.
visitdenver.com/denverbeertrail

19.30: Take a short taxi ride to The Source, a shared arts and dining space in an 1880s ironworks foundry. The complex expanded late last year with The Source Hotel, featuring 100 stylish rooms, a brewery and rooftop terrace.

One of the hottest tables for dinner is Acorn. Sharing plates of coal-roasted beets and wagyu beef tartare toast are designed to be nibbled with cocktails.
denveracorn.com

22.00: Return to downtown for a nightcap at Poka Lola at The Maven Hotel, a fresh addition to LoDo’s accommodation scene. With powder-green sofas and monochrome chevron tiles, it beats your average lobby lounge.
pokaloladenver.com

Norwegian last year launched the UK’s cheapest year-round direct flight, with twice-weekly one-way flights from Gatwick starting at £179 in economy and £599 in premium, while United is relaunching Heathrow Denver flights from late March until October, having last operated the route in 2010. 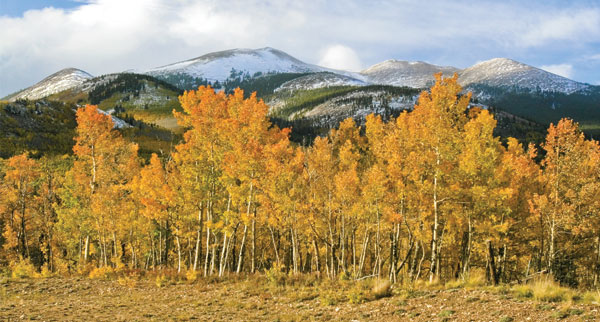 Where to go next?

San Juan Mountains
Treasure hunters flocked to Colorado during the 1800s and remnants (if not gold nuggets) remain. Find gold rush-era saloons in Telluride and hike to ghost towns in the mountains for a taste of the Old West.

Aspen
The I-70 west cuts through national forest to reach this sleek ski resort, which is equally beautiful in summer or clothed in autumn colours. Snowmass, Beaver Creek and Vail are nearby for more outdoor adventures.