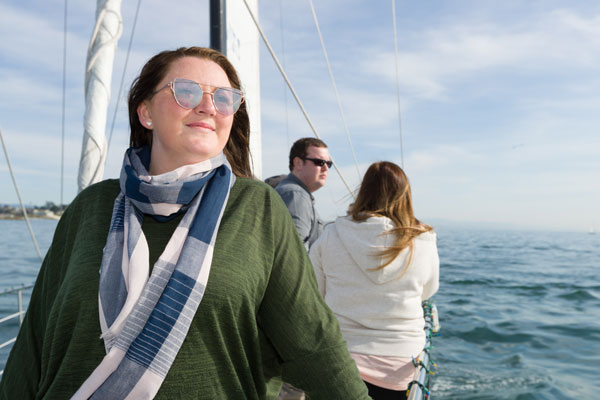 Q. Why did you enter the competition to be a Cover Star?
A. The reason I applied was because one of the girls in the shop won a place a few years ago. I have only been in travel for three years, so I didn’t know if I was ready for it. But she said that I should go for it. It was my dream to go to America. It was everything that I had hoped it would be. The thought of going to California was amazing. When I got the call from Travel Weekly to tell me I had won a place, I jumped out of my chair, although I was in the shop full of customers.

Q. How was the flight to LA?
A. I never thought I would get to experience business class in my life – it was amazing. We flew American Airlines out, then British Airways on the way back. It was buzzing on board on the way out, but it was quite a long flight, so I squeezed in a bit of a nap. It was a proper bed on board, so I had to try it.

Q. What was the first place you stayed, the Mondrian Hotel, like?
A. It was the most unique hotel we stayed in on the trip. The restaurant was lovely. I had steak, like I had for most of the week. The Skybar was lovely. Everything was a bit of a blur because of what we were doing.

Q. Where did your photoshoot take place?
A. In Hollywood, just outside a cute little cafe bar that had quite a retro feel to it. It was on the main road and there were locals walking past as we took the mpictures. I felt like a bit of a celeb with people looking on. I hadn’t done anything like that before. The only thing that worried me was that it was quite windy, so getting the right shot was tricky.

Q. What were the highlights?
A. There were several. One of the first meals that we had was at the Tower Bar Restaurant at the Sunset Tower Hotel, where we spotted Jennifer Aniston. The other thing I particularly enjoyed was the zip-lining at Mount Vernon. I am quite a thrill-seeker. That was great, especially as I’d never done it before. We had a bonfire on the beach in Santa Cruz, where we stayed at the Seascape Beach Resort. There was a band on the beach playing their own music, which was also really enjoyable.

Q. What was California like away from the hustle and bustle of LA?
A. It was lovely. I’d recommend the Chardonnay Sail cruise. We got to see sea otters and I am sure there were also some sea lions. As well as the boat trip, we stopped off at the Santa Cruz Beach Boardwalk, where we saw retro fairground rides such as a rollercoaster and a big wheel. I had not seen the Lost Boys film, but there is a famous bridge scene in it – and we went onto the bridge. For the people who had seen the film, it was a classic moment. We also went dune buggying, which was great fun.

The whole trip was an experience. There was not one thing that wasn’t a highlight. But flying business class was an opportunity that allowed me to be fresh when I arrived. The food was lovely too; I had steak and sautéed potatoes. I would recommend people fly business class for long-haul flights. There are benefits of having the comfort and feeling fresh when you land. The cabin crew were lovely. Nothing you asked for was too much trouble. I have sold only a few business-class flights in my time, but I can now tell my customers about the benefits.

Bike tour: I would definitely recommend the Beverly Hills bike tour. It goes through the area where The Bodyguard was filmed. You get much closer to the sites on a bike than on a coach.

The wine: I am not a big wine person. If I had it at home, I would have it with lemonade. But even I was able to enjoy a few glasses of wine on the trip, so connoisseurs would love it.

Pismo Beach: It was really chilled out. I loved the celeb vibe in West Hollywood, but I am quite chilled out as a person. We stayed at Inn at the Pier in Pismo Beach, which had some lovely Christmas decorations.