Views don’t get better than this. From my balcony, I can see the flat expanse of the Dead Sea, the only ripples caused by a solitary tourist bobbing like a beach ball. The sun is sinking behind a distant mountain ridge, and the first stars have started to appear.

When I told people I was visiting Jordan, two questions popped up repeatedly: “isn’t there a war there?” (no); and “are you going to Petra?” (double no).

True, most visitors make a beeline for the country’s most famous Unesco site, Petra, flying into Aqaba in the south, or arriving on day trips from Egypt’s Red Sea resorts. But I’d flown in to the northern city of Amman – Jordan’s capital, and a great base from which to explore the historic sites surrounding the Dead Sea.

Amman for all seasons

The spring opening of the W Amman has raised the capital’s cool stakes. A Fairmont hotel also recently opened in the city and St Regis Hotels & Resorts’ new Amman property should launch by November.

My own base at the beautiful Grand Hyatt Amman is close to the city centre. It costs me about £3 to get there in one of Amman’s yellow taxis, and I marvel at my driver’s dexterity as he nips around lorries without spilling a drop of the thick coffee he’s slurping from an ornate glass.

“I count the number of shops within a 50-metre stretch, and my tally includes a rug stall, a saddle shop, a rifle store and a shop selling shiny copper kettles.”

Around the magnificent Al-Husseini Mosque in the city centre is a colourful melange of businesses shoehorned into the lower floors of apartment blocks. At one point, I count the number of shops within a 50-metre stretch, and my tally includes a rug stall, a saddle shop, a rifle store and a shop selling shiny copper kettles.

Other Amman attractions include Jabal Al Qal’a (Citadel Hill), home of the eighth-century Umayyad Palace and the Roman Temple of Hercules. 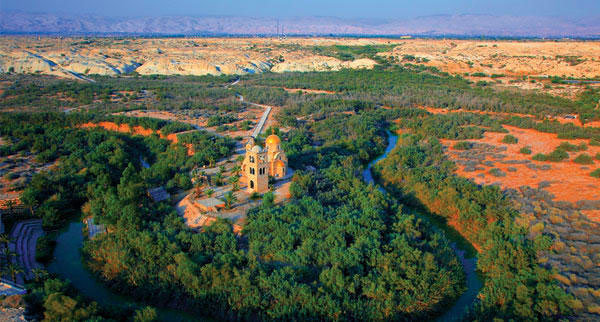 Moving on from Amman, the base for most of my stay is Sweimeh, on the Dead Sea’s eastern shore, which is less than an hour from the capital.

The newest hotel, the Hilton Dead Sea Resort & Spa, sits at the end of a string of properties that includes the Mövenpick Resort & Spa Dead Sea and the Dead Sea Marriott Resort & Spa. It takes me 45 minutes to get from my hotel, the Kempinski Hotel Ishtar Dead Sea, to Madaba, the city of mosaics.

Madaba, referred to in the Old Testament, has so many Byzantine-era mosaics that I suspect the creators halted their production line only because they ran out of room. The most famous example is in the Greek Orthodox St George’s Church. Inside, a scrap of carpet has been casually thrown over the biggest exposed section, and I discover another exposed patch beneath a pew. The mosaic map, which dates back to AD 560 and depicts every Middle Eastern biblical site, originally contained two million pieces.

“Adrenaline junkies flock to this spectacular spot (depending on the season) to hike, abseil, swim or canyon along the breathtaking gorge.”

At the nearby Madaba Archaeological Museum, I find the remains of a house, the entire floor of which is covered by a mosaic depicting peacocks and dancing women.

There’s further proof of Jordan’s popularity at the nearby Dead Sea Panoramic Complex, which is home to a restaurant, conference centre and the Dead Sea Museum. But most people come for the view – head to the terrace for stunning views over the surrounding mountains, or sign up for a guided walk along the nearby Zara Cliffs, part of Africa’s Great Rift Valley. Get lucky and you’ll spot an ibex or a gazelle.

Another popular wildlife-spotting destination is nearby Wadi Mujib, the world’s lowest nature reserve. Adrenaline junkies flock to this spectacular spot (depending on the season) to hike, abseil, swim or canyon along the breathtaking gorge. 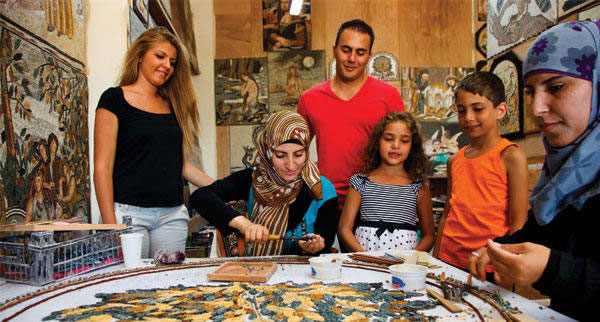 One of the area’s most popular sites is the Unesco-listed Bethany Beyond the Jordan, on the eastern banks of the River Jordan. Said to be the spot where Jesus was baptised, it includes Byzantine remains and several churches. The historic (and now dried-up) baptism site is encircled by a dusty walkway and several huge mosaic murals: one depicts the Pope (on a golf cart) and King Abdullah II of Jordan, his enormous gold watch represented by tiny golden tiles.

“The view from the 800m peak over the scrubby desert to Israel is breathtaking, and a map at the viewpoint highlights nearby sites.”

I walk towards the Jordan River and find a handful of visitors wearing white baptismal cloaks, about to enter the water. Metres away, on the West Bank side, it’s a different story, with long, orderly queues of devotees waiting to be baptised – more than 600,000 pilgrims visit the site every year.

My final stop is Mount Nebo, from where Moses is said to have seen the Promised Land. The view from the 800m peak over the scrubby desert to Israel is breathtaking, and a map at the viewpoint highlights nearby sites, including Hebron (40 miles away) and Bethlehem (31 miles away). 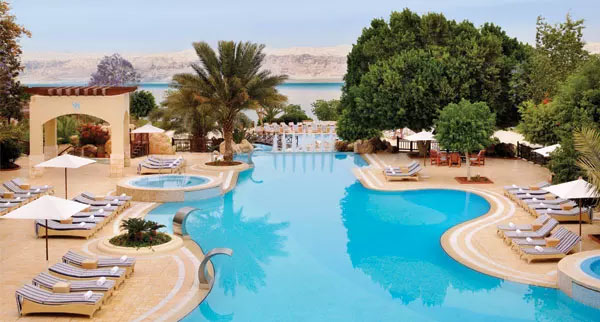 Back on the Dead Sea’s shores, hotels are being built with lightning speed. I stop by the Hilton Dead Sea Resort & Spa, connected to a small shopping centre. Bizarrely, its main attraction appears to be the Rovers Return – a replica of the pub from Coronation Street. I can even order ‘Betty’s Hot Pot’ and wash it down with Amstel, the first beer bottled in Jordan.

It’s all a bit odd, so I retreat back to the 345-room Kempinski Hotel Ishtar Dead Sea, which has been modelled on the Hanging Gardens of Babylon. It’s the most luxurious Dead Sea hotel; the spa alone has 20 treatment rooms and guests – who have included Bono and Angelina Jolie – buzz around in golf carts. There are seven restaurants and bars, but I’m won over by the Obelisk Restaurant’s legendary buffet, with its enormous scallops and endless varieties of hummus.

“Entering the water, the saltiness prevents me sinking below the surface, and I bob along, admiring the view.”

As for the other resorts, the 250-room Dead Sea Marriott Resort & Spa, with its numerous pools and sprawling gardens, is especially popular with families, while the 346-room Mövenpick Resort & Spa Dead Sea has one of the grandest lobbies I’ve come across. It’s another enormous property, with rooms tucked inside buildings made from local stone.

All of the resorts offer direct access to the beach, so I wander down to the sands. I stick my finger in the water then lick it. It’s so salty that my mouth tingles. Entering the water, the saltiness prevents me sinking below the surface, and I bob along, admiring the view. It turns out that the lowest point on Earth might also be my favourite.

“Visiting the Dead Sea and surrounding area is a unique experience. The country is easy to get around, especially when travelling with a group, meaning that clients can enjoy a holiday that includes sites such as Petra, as well as the Dead Sea.”