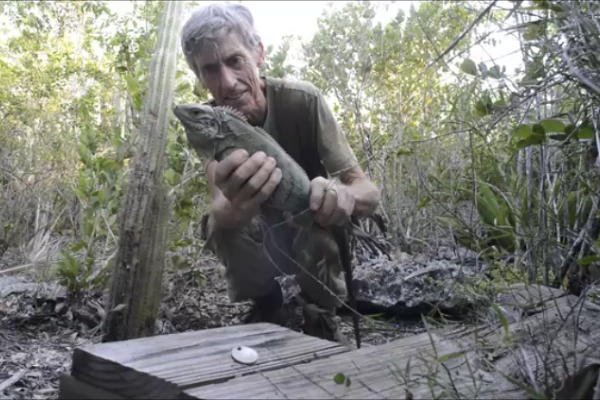 The National Trust for the Cayman Islands says the blue iguana has been saved from extinction with the release of the 1,000th endangered animal into the wild.

The iguana, named Renegade, was let into Colliers Wilderness Reserve – a National Trust protected area in the East End of Grand Cayman – and marked the milestone in the return of the Cayman native animal from the brink of extinction.

The blue iguana population has now gone from critically endangered, to endangered. Its wild population will continue to be monitored.

Renegade, like the other blue iguanas released into the wild, was microchipped and fitted with colourful bead markings for future identification purposes. He was given a head-start in the specialist breeding facility at the Queen Elizabeth II Botanic Park and was one of 10 iguanas released last week. The Blue Iguana Recovery Programme plans 50 more releases this year.

“This is a very happy day,” said Stuart Mailer, environmental programmes manager for the National Trust for the Cayman Islands. “It’s such a wonderful experience for visitors to be able to come and see the animals roaming around in the wild. It’s one of the major draws for the Botanic Park.”

The blue iguana was considered ‘functionally extinct’ in the wild as recently as 2005, when only 10 remained in the wild.

The breeding programme at Queen Elizabeth II Botanic Park was set up by Cumbrian-born Fred Burton after he realised the animals were in danger of extinction and began breeding the iguanas in his office.

Wild dogs and disease have played a part in hampering the efforts of the breeding programme, but the Cayman Islands says the 100th release “marks a significant breakthrough for conservation efforts not only in the Cayman Islands, but worldwide”.