Manchester Airport has marked one year of construction on the biggest investment project in its history by releasing images of the work completed so far.

The airport is spending £1 billion on transforming the facility, that will see Terminal 2 become 150% bigger and become the focal point of the airport’s operations.

It has released time-lapse footage showing how the project has progressed over the past 12 months and a new video tour that gives passengers the chance to glimpse into the airport’s future.

Andrew Cowan, chief executive of Manchester Airport, said: “This is the largest investment ever made in the airport and will transform the experience for our passengers and airlines alike, as well as creating job and training opportunities for local people and boosting businesses working on the scheme in the process.

“Walking around the site, you really get a scale for how big the project is and the benefits its delivering for not only people securing jobs on the site but also the companies from across the North working on the scheme.”

The redevelopment got under way a year ago after a visit by the Secretary of State for Transport, Chris Grayling. 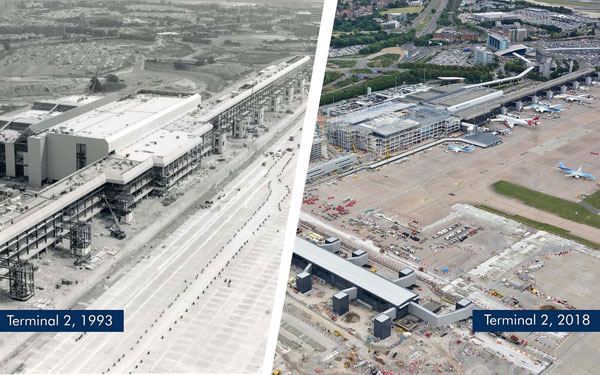 Since then, the airport’s skyline has changed dramatically as the first pier has been built and over 70% of the steelwork has been erected on the terminal extension.

It’s one of the biggest construction programmes in the North of England and there are currently 1,200 people working on site – including 80 apprentices, in trades ranging from plumbing and scaffolding to quantity surveying and civil engineering.

At the peak of the project, at the beginning of 2019, it is expected that nearly 1,500 people will be working on site with a target of 150 apprentices.

The first pier is set to open to passengers in April 2019.  The terminal extension is on course to open in 2020.

To enable the new pier and terminal extension to be constructed, work has also been progressing on the airfield.

In the first phase of airfield works, the apron has been extended to the west; including new taxiways and apron reconfiguration to allow the pier and additional aircraft stands to be used.

The second phase, which began in June 2018 involves a new taxiway, increasing the capacity of existing taxiways, new aircraft stands and AGL replacement and installation and is part of the reconfiguration of the airfield that will help to feed the redeveloped Terminal 2. 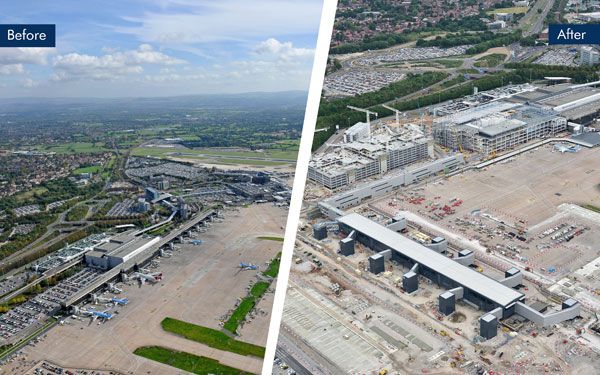 After the terminal extension the next pier is scheduled to open in 2022 and the refurbishment of the existing Terminal 2 building will also be completed that year.

Terminal 1 is currently scheduled to close by 2023 with the third pier set to open in 2024.  Once completed, Terminal 2 will have capacity to handle over 35 million passengers a year.

The time-lapse footage released shows how the project has developed from the initial works that saw a temporary gate lounge being built to the building of the pier and steelwork for the terminal extension being erected.  Whilst the new video tour shows how the pier and terminal extension currently look and show case how they will look when open to passengers using the latest CGIs.

Bryan Glass, Laing O’Rourke project director, said: “We’re on schedule to deliver the transformation of Terminal 2 and that certainty of delivery has been driven by our offsite construction approach, with elements of the project manufactured offsite and assembled by our expert project team and technicians.

“There’s no room for complacency of course! Our team is focused on the next milestone – hand over of the first pier in January 2019.”

“We have developed a meticulously planned programme of works on the airfield that allows the airport to remain fully operational, whilst we deliver a larger and more efficient layout of the new and existing aprons and taxiways with new lighting and services.

“Galliford Try are incredibly proud to be working on this project that will see it transform Manchester Airport for years to come.”

So far on the project, on the terminal extension and pier:

Whilst out on the airfield:

Video tour – Take a tour of the pier and terminal extension as it currently looks and how it will look when passengers come to use it.

Time-lapse footage – See how the building work has progressed over the last 12 months.

All of England will be added to Jersey’s red list