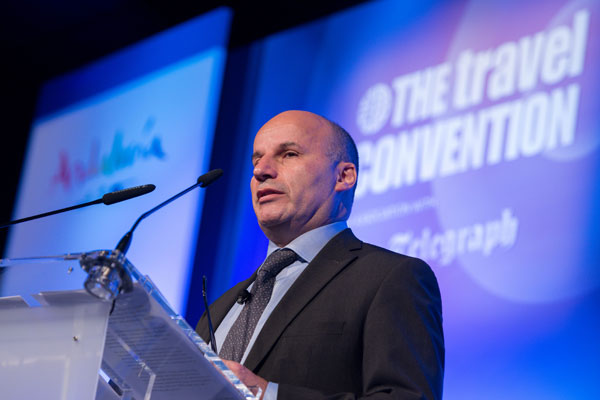 Abta chief executive Mark Tanzer declared “reasons to be cheerful” as he opened the association’s Travel Convention in Seville on Tuesday, while demanding “strong, clear regulation to be applied equally”.

Tanzer told the Convention: “We’re reaching a decisive moment in the Brexit process, but while politicians dither customers continue to book.

“Volumes and value are up. Abta research shows Europe tops the list of most-popular destinations for next year.”

He insisted: “There are reasons to be cheerful.”

Tanzer said: “Over the last 12 months, I’ve spent a lot of time in Europe impressing on our partners the value of our tourism. Everybody agrees. There is recognition of the value of UK tourism.”

He explained: “Abta recently developed a no-deal Brexit scenario paper for members, not because we predict a no-deal outcome but to enable businesses to plan and consumers to book with confidence.”

Tanzer said: “Preparedness is all. We live in an era of great chaos. Change creates winners and losers at the country, industry and company level.

“We chose a core theme of ‘trust’ for the Convention because the question of trust is becoming pervasive.”

He suggested a decline in trust in social media has “created opportunities” for Abta members, saying: “Only recently, social media was seen as more trusted than traditional media.

“Now the Edelman trust barometer shows fewer than 25% of adults trust social media. That creates opportunities for us.

“There has been a significant fall in trust in review sites among young people – of minus 14 points. That is a great opportunity.”

However, he said: “The loss of confidence in news sources is amplified by the lack of trust in politicians.

“Why does that matter? We need regulation and we need trust in politicians to make that regulation.”

Tanzer insisted: “The travel industry likes strong and clear regulation. When we consulted members [before the 2016 Brexit referendum] there was no appetite for a bonfire of regulation.

“But regulation needs to be applied equally.”

He argued: “We’re just beginning to see a move to regulate sharing accommodation and transport platforms.

“These platforms were welcomed with open arms by governments. Now we’re starting to recognise the issues [they bring] such as overcrowding in destinations.”

Tanzer told the Convention: “The challenge for the industry is to build and maintain trust. Abta’s mission is to bring confidence to the heart of travel.”

Travel Weekly’s Amie Keeley caught up with Mark Tanzer ahead of the convention for the Travel Weekly Podcast, to discuss the themes of this year’s and answers questions from agent. Hear what he had to say: