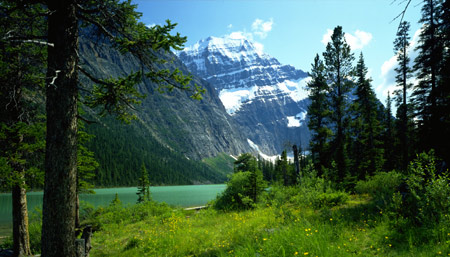 Road through the Rockies

Thomas Cook Tours offers a nine-night Riches of the Rockies itinerary that takes in all the highlights. After flying direct into Edmonton, and exploring the town and its historic fort, it’s straight on to Jasper, in the heart of the Rockies.

Active visitors will love to hike, bike, ride and raft their way around this national park. For those who prefer to relax, there are gorgeous views and the possibility of spotting bears and elk.

The road between Jasper and Lake Louise is the famous Icefields Parkway, one of the most scenic routes in the world. A stop to explore the massive Athabasca Glacier is an absolute must.

Lake Louise and Banff are home to yet more breathtaking scenery. There’s only time for a short stop in Calgary, town of cowboys and the Canada Olympic Park, before flying home.

Canadian Affair’s 12-day Eastern Explorer is a great taster of Quebec and Ontario, beginning in cosmopolitan Toronto, where visitors will be overwhelmed with both the choice of galleries and museums, and with the variety of cuisines on offer in its highly rated restaurants.

Then there is a whale-watching cruise on the St Lawrence River, before a visit to Canadian capital Ottawa with its grand parliamentary buildings and the scenic Rideau Canal.

Finally there’s just time to follow the trails of the Algonquin Provincial Park, marvel at Niagara Falls, and have a farewell dinner in the CN Tower in Toronto before flying home.

The easterly Maritime provinces kick out from mainland Canada into the Atlantic, and were the first area of Canada to be settled by Europeans. There are rugged coastal landscapes and picturesque fishing villages to be visited, and a strong sense of Celtic heritage.

Collette Worldwide has launched a new 11-day trip that showcases the best of this region. Starting in Nova Scotia, visitors tour the city of Halifax and discover its links to the Titanic before swooping down the coast to the fishing town of Peggy’s Cove, and its classic red and white lighthouse.

Then it’s off to tour the city of Moncton and the rest of the New Brunswick’s beautiful rural landscape, before heading to slow-paced Prince Edward Island, where author Lucy Maud Montgomery wrote the classic children’s book Anne of Green Gables.

There’s the chance to explore the Cabot Trail on Cape Breton Island, where towering highlands are silhouetted against bright blue skies, and visitors may well spot a moose or an eagle soaring overhead.

Collette’s Canada’s Atlantic Coast tour starts from £1,849 including flights, some meals and door-to-door transfers within a 100-mile radius of the departure airport. colletteworldwide.com, 0800 804 8700

Canada is famous for its train journeys, and its stunning coastline makes it a cruising hot spot. The Kuoni Rail and Sail tour combines the best of both worlds.

It includes a journey on the legendary Rocky Mountaineer train, starting in Vancouver. The route passes through the lush green fields of the Fraser River Valley on the way to Kamloops, and then chugs alongside glaciers and alpine meadows on the way to Banff.

From there, guests travel by coach along the Icefields Parkway, stopping at the Athabasca Glacier before arriving in Jasper. From there, the Skeena Train takes a scenic route through the mountains moving northwest towards the Pacific Ocean.

From the coastal town of Prince Rupert, a full day’s scenic cruise down the coast shows off the forested shoreline and jagged inlets of the Inside Passage to its best advantage, docking at Port Hardy to give visitors the chance to finish their trip with time to explore Vancouver Island.

This is the biggie. Cosmos Tourama’s Trans-Canada Explorer itinerary tries to squash all the country’s must-sees into 18 days.

In the east it visits Toronto, Niagara Falls, the St Lawrence Islands National Park, Ottowa, Quebec City, and Montreal, before flying west to Calgary and visiting the highlights of the Rockies in Banff, Lake Louise, Jasper and Kamloops before ending up in Vancouver city and on the island.

Cosmos Tourama’s 18-day Trans-Canada Explorer tour starts from £1,935 including international and domestic flights, accommodation, porterage and transfers and a tour director. There is a single-share option that allows solo travellers to avoid a supplement. cosmostourama.co.uk, 0871 423 8647