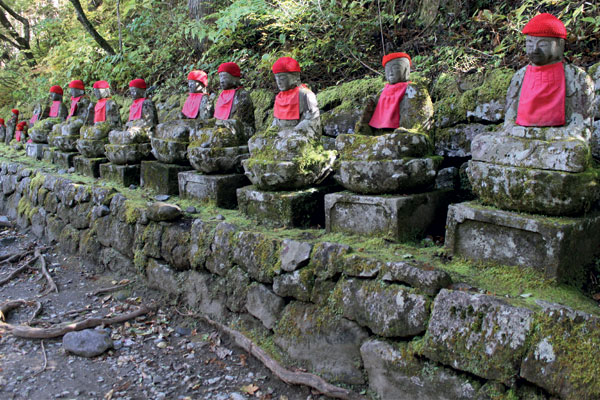 Samurai sword training, Zen meditation and stripping off at an onsen? Flora Ioannou finds the ‘real’ Japan along the Diamond Route.

There’s a new gem in the heart of Japan. The Diamond Route is a little-known tourist trail only 2.5 hours away from Tokyo made up of three of its northern neighbours – Ibaraki, Fukushima and Tochigi prefectures – which, if you join them together on a map, form the shape of a diamond.

These regions have joined forces to showcase their sparkling treasures of samurai castles, golden shrines and natural hot springs, so if it’s an experience your clients are after, look no further.

They’ll have to be quick, though, as interest in this area is growing rapidly.

“The Diamond Route is a little-known tourist trail only 2.5 hours away from Tokyo made up of three of its northern neighbours.”

Operators have introduced itineraries to Japan left, right and centre in response to its rising popularity, and even the relatively new Diamond Route can be tailor-made for different budgets by specialists such as InsideJapan Tours and Links Travel & Tours.

It’s worth getting to know it now, as interest in the country is only set to grow further in the run-up to major sports events including the Rugby World Cup in 2019 and the Tokyo Olympics in 2020.

To help you get to know this new route, we’ve put together some of its jewels, so you can dazzle your clients. 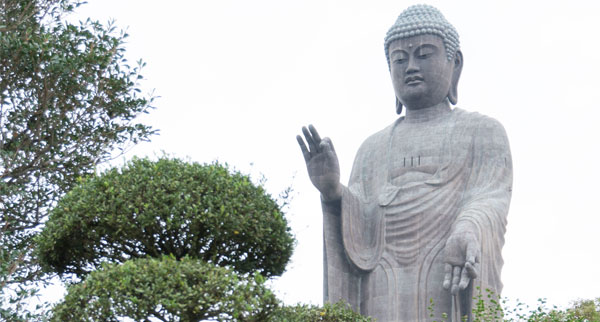 Ushiku Daibutsu: Situated in Ibaraki, this magnificent bronze Buddha can be seen for miles. It even made it into the Guinness Book of Records in 1993 as the tallest Buddhist statue in the world (it’s now fifth tallest statue, but still the tallest in Japan), so is deserving of a visit. Standing 393ft, it was built to commemorate the birth of Shinran, the founder of Jodo Shinshu Buddhism.

Visitors come from far and wide to enjoy the breathtaking views here – on a good day you can see Mount Fuji, or so I’m told – alongside the well-manicured grounds and a pond full of koi carp, which leap up out of the water to catch morsels of food.

“The abundant flowers and grasses are frequently replanted, giving you an amazing backdrop to envious Instagram shots.”

Hitachi Seaside Park: Set on the Pacific coast, this natural public park overflows with blooming seasonal flowers, sand dunes, forests and grasslands (entry £3.10). The most effective way to get around is to hire a bike at the entrance. It’s the best £2.80 you’ll spend, affording three glorious hours to pedal around one of the many cycle tracks at your own pace.

It doesn’t matter what time of year you visit, as the abundant flowers and grasses are frequently replanted, giving you an amazing backdrop to envious Instagram shots.

Other attractions include an amusement park, BMX tracks and, if you want to just sit back and take in the views, several cafes and restaurants. 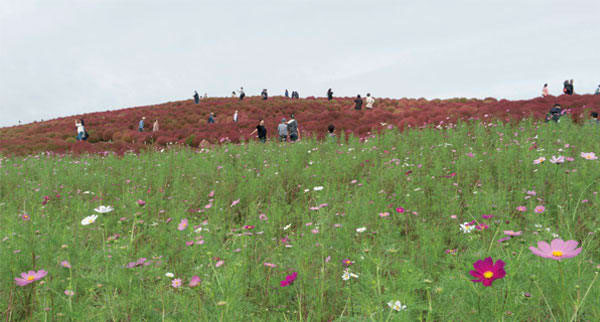 Mito: The capital of Ibaraki Prefecture is famous for natto, Japan’s new ‘superfood’ made of stringy fermented soy beans that reduce cholesterol and are good for the heart – no one actually likes them, not even the Japanese.

There are many tourist hotspots here, but if it’s real tradition and culture you are after, make sure your visit coincides with a local festival. The otherwise-shy Japanese love to sing, dance and beat a giant drum or two when it comes to their traditional celebrations, and want nothing more than for you to join in.

“The capital of Ibaraki Prefecture is famous for natto, Japan’s new ‘superfood’ made of stringy fermented soy beans that reduce cholesterol.”

In October, the Yoshida Jinja Matsuri (harvest festival) takes place, and it’s unlike any you have been to at home. Festival-goers battle it out by smashing their floats into their opponents – the harder they smash, the happier the gods become – and the winners are blessed with a good harvest. So you can only imagine how lively the atmosphere gets. 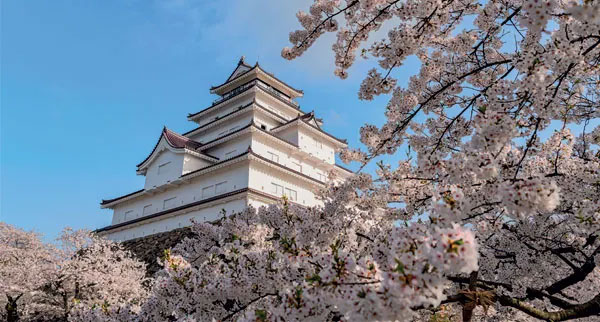 Ryokan: Ryokan are Japanese-style inns that have been around for centuries and were once resting places for traders and samurai travelling between towns. Found throughout Japan, they are now popular with tourists not just as a place to rest your head, but also as a way to experience genuine Japanese hospitality and the best homemade food you’ll taste.

Nakamuraya Ryokan is a 120-year-old, family-run ryokan in Iizaka, a small onsen village with the oldest natural communal baths in Fukushima. It has just six rooms, which start at £70 per person per night, including breakfast.

“You have to bathe naked with the locals, but if you do pluck up the courage it’s a great way to make new friends.”

Many say the minerals in the onsen (hot spring) keep people looking young, so a two-day stay could knock a few wrinkles off your appearance, though it’s worth noting that bathers with tattoos are banned – a policy designed to keep out Yakuza, the Japanese equivalent of the mafia, who traditionally have many tattoos.

These baths are not for prudish Westerners, as you have to bathe naked with the locals, but if you do pluck up the courage it’s a great way to make new friends. 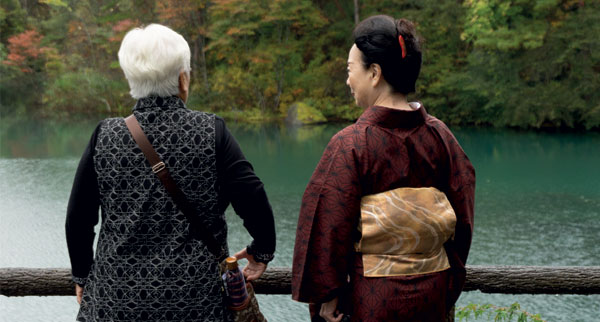 Goshikinuma: This little-known, two-mile hiking trail through Bandai-Asahi National Park, at the foot of Mount Bandai, is breathtaking. It’s home to five volcanic lakes, the hues determined by their unique make-up of minerals, set in a chameleon-like forest that changes its appearance according to the season.

This trail is not just for hikers, but for anyone who appreciates nature at its best, as there are so many incredible views along the way, visitors will spend more time stopping to take photos than walking along the one-hour route.

“This once-in-a-lifetime session will leave you feeling exhilarated and honoured to be in the presence of such graceful warriors.”

Tsurugajo Castle: An absolute treasure trove for history buffs, the castle was once the seat of local government for powerful warlords who valued Aizu for its strategic location as the gateway to the Tohoku Region.

The castle’s Rinkaku Teahouse was the first of its type in the 16th century and is thought to have played an important role in the development of Japan’s tea ceremony traditions, making it the place to experience Japan’s famous green tea.

If tea sounds a little tame, get more hands-on by unleashing your inner samurai at the Butokuden, a martial arts dojo within the grounds of Tsurugajo Castle, to take part in a sword-training session with a kendo martial arts group. This once-in-a-lifetime session will leave you feeling exhilarated and honoured to be in the presence of such graceful warriors, even though some are only eight years old (Tom Cruise, eat your heart out). 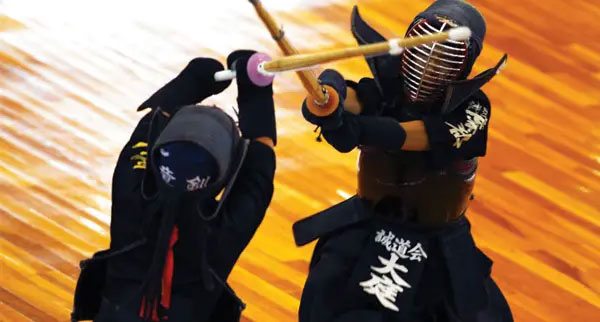 Toshogu Shrine: This Unesco World Heritage Site is the most lavish shrine in the city of Nikko – perhaps even in the whole of Japan – and only a two-hour train ride from Tokyo.

Toshogu Shrine certainly lives up to the hype, comprising a collection of 55 Buddhist temples and Shinto shrines that are masterpieces in their own right. Each is elaborately decorated with a multitude of intricate carvings of dragons, elephants or three wise monkeys splashed in vibrant colours and glittering gold leaf. Its history dates back to 1617 and it’s also the final resting place of the founder and first shogun of the Tokugawa Shogunate, Tokugawa Ieyasu.

“It’s an exhilarating experience, as he corrects posture and position with a none-too-gentle whack across the back with a four-foot stick.”

Rinnoji Temple: There is no better way to end a journey around northern Japan than being taught to open your mind by the world’s experts in meditation. Rinnoji is undoubtedly Nikko’s most important temple, founded by Shodo Shonin, the Buddhist monk who introduced Buddhism to Nikko in the eighth century.

The temple hosts Zen meditation sessions every Saturday, and once a month there are Shakyo and Shabutsu meditation sessions, which are the transcriptions of Buddhist sutras in pursuit of enlightenment; both are open for anyone to join.

But if you want to learn from a master in a one-to-one session, this is the place to do it. It’s an exhilarating experience, as he corrects posture and position with a none-too-gentle whack across the back with a four-foot stick – to keep you focused, apparently, though I’m still to learn on what – but it does mean a chance to reflect on the examples of authentic Japanese culture found along the Diamond Route. What more could you need to achieve inner peace?