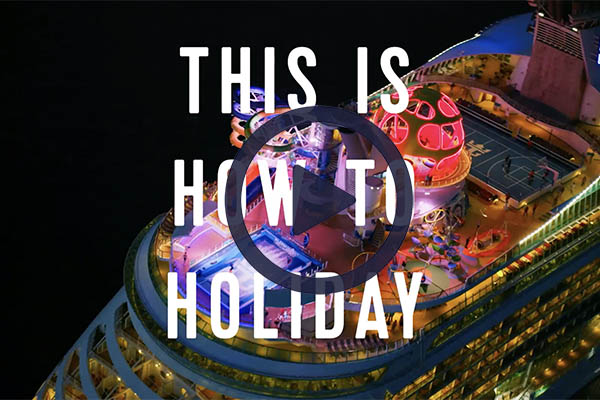 Royal Caribbean has opted against TV advertising for the second year in a row and ditched radio in a bid to attract new-to-cruise customers.

The cruise line is instead choosing to use video on demand (VOD) and outdoor advertising.

In March, Ben Bouldin, Royal’s associate vice-president and managing director for the UK and Ireland, said the line’s decision to drop TV last year was vindicated by a strong wave period.

The latest iteration of Royal Caribbean’s UK campaign, ‘This Is How To Holiday’, will launch on VOD on December 26.

The creative shows the different experiences available to Royal Caribbean passengers on board its ships and in destinations.

Stills, video and audio from Royal Caribbean’s turn-of-year campaign will appear in a new immersive tunnel at St Pancras station for two weeks on January 7.

The campaign’s creative will also run on Waterloo station’s digital screens above platforms, as well as  on websites and social media.

Royal Caribbean has decided to drop radio altogether after running its turn-of-year campaign on the platform last year.

The cruise line will launch a TV ad in Ireland on January 7. It said the decision reflected the difference in consumer habits between new-to-cruise audiences there and in the UK.

Bouldin said: “We were delighted with the success of last year’s campaign and have built on our learnings to ensure this year is even bigger and better.

“Our new campaign continues to lead the way in terms of delivering fresh, innovative ways to showcase the cruise experience to a family audience”

Mario Bounas, UK & Ireland director of marketing, said: “Our high-energy, fast-paced new creative takes a virtual sledge hammer to busting the myth
that ‘cruising isn’t for me’ and shows our audience it’s a much richer experience than people give it credit for. In short, you think you know cruising? Think again.

“The campaign will drive our brand awareness and values at this key time of year, which will undoubtedly have a direct impact on footfall and website traffic for our trade partners.”