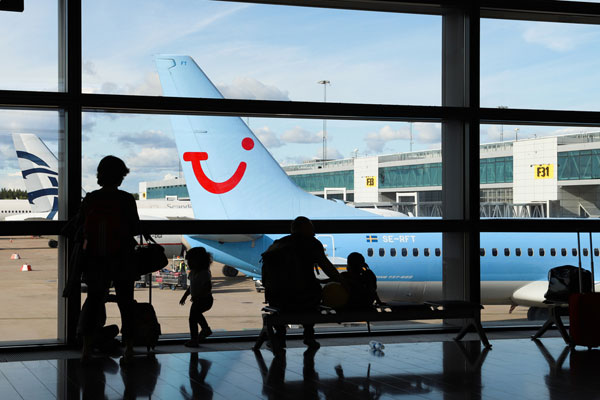 Members of a family had to spend most of a two-hour flight on the aircraft floor because their row of seats did not exist.

The Civil Aviation Authority has asked Tui to explain why Ian and Paula Taylor and their ten-year-old daughter Brooke had no seats on the flight from Menorca to Birmingham.

The family, who paid £1,300 for their holiday, was allocated seats 41 D, E and F but when they boarded the aircraft in June there was an empty space where their row should have been.

Brooke was given a seat next to a stranger and her parents were moved to two folding seats for take-off and landing that are reserved for cabin crew. The seats blocked access to food and duty-free supplies so the couple had to move back to the empty space for the rest of the flight, The Times reported.

Mrs Taylor, from Alcester, Warwickshire, said that Brooke had felt uncomfortable sitting alone with a stranger so she joined her parents on the floor at the back of the aircraft.

“We couldn’t believe it when we realised that there genuinely weren’t any seats for us,” Mrs Taylor told BBC One’s Rip Off Britain, Holidays, which is due to be broadcast tomorrow.

“It’s hard and it’s uncomfortable and it’s just filthy. The co-pilot came and sat with us on the floor and said he just wanted to thank us for our co-operation and understanding.”

She said that when they contacted Tui for a refund a member of staff did not believe that the seats had been missing and offered a “goodwill” payment of £30.

The CAA says that passengers are allowed to sit in crew seats under certain conditions but that they must not be left unseated during any stage of the flight.

The regulator told Rip Off Britain that it would be contacting Tui for an explanation of why the family had had to sit on the floor for most of their flight.

A Tui spokesman said: “Unfortunately a last-minute aircraft change meant that the seats the family was originally assigned were unavailable as the alternative aircraft had a different seating configuration.

“We’re also sorry for the way the situation was initially handled and we’ll be investigating this. We will also be . . . offering a full refund.”

More: Tui customer made to pay £20,000 over dishonest sickness claim