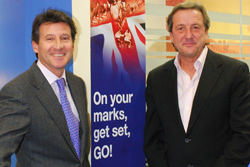 Thomas Cook has launched a promotional campaign across its shop network after a £20 million deal to become a sponsor of the London 2012 Olympic and Paralympic Games and the only provider of UK short breaks to the event.

The company is promoting the partnership on window posters in Thomas Cook shops, its brochures, tickets, and on its 94 aircraft. Travel agents have been trained on selling the product and been shown promotional videos on the event.

Chief executive Manny Fontenla-Novoa said the deal was the first of its kind.

He added: “It will drive people to the high-street shops. I think there will be huge demand and our staff are very excited about it; there is a real buzz in our organisation. I remember what it was like for the last Football World Cup and this is a much bigger event.”

He admitted the travel industry’s core overseas holiday sales could be hit by the 2012 Games, but hoped Thomas Cook would benefit from its exclusive sponsorship deal. The company has already raised with its overseas hoteliers. He added: “It’s going to have an impact; there’s no question about it,” he said.

It is estimated Thomas Cook will sell more than 250,000 tickets across all events with its packages – accounting for around 3% of tickets on sale for the Games overall. The number of tickets for certain events will be capped. “We are expecting there to be too much interest for the [mens’] 100-metre event,” he added.

The company is now allowing pre-registrations for packages, including tickets to the Games, through its shops and online at thomascook.com. Tickets go on sale in May 2011.

Fontenla-Novoa, who anticipates half of bookings to come through Thomas Cook’s retail chain and half online, promised a wide range of prices. “There will be a range of accommodation up to five-star packages and all sorts of travel from coaches to private aircraft,” he said.

London Organising Committee of the Olympic Games (LOCOG) chief executive Paul Deighton agreed: “There will be a substantial number of tickets that will be affordable. We want to make sure we have full stadia and the atmosphere is as electric as we can make it.”

Thomas Cook has paid cash to become a tier two sponsor of the Games. There are three tiers: tier one sponsors pay around £40 million, tier two from £20 million and tier three sponsors £10 million. Fontenla-Novoa added: “We made a big financial commitment to this, but it’s about much more than making money – I’m not sure we could put a value on it.”

Meanwhile, the company said its sports division – also an appointed travel company for the 2010 Football World Cup in South Africa – is likely to double its profits year on year and would continue to grow.