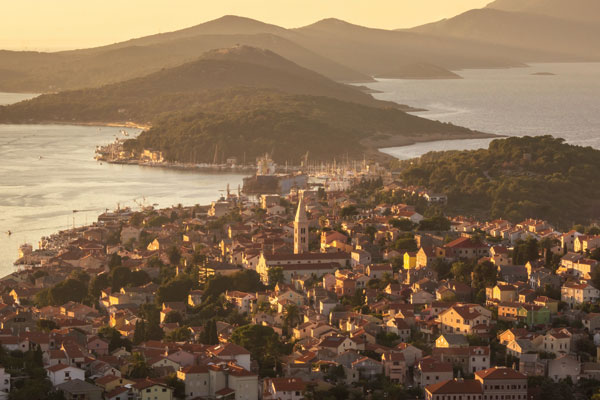 Losinj, aka the ‘island of vitality’, takes the crown as Croatia’s most laid-back escape, finds Mary Novakovich.

With Istria to the west and Dalmatia to the south, little Losinj in the Kvarner Gulf can easily get lost between Croatia’s best-known regions. But this sleepy island and its neighbours – Krk, Cres and Rab – have been welcoming tourists in their own quiet way since the 19th century, when the Austrian elite discovered this undeniably beautiful corner of Croatia.

Stretching into the Adriatic like a long bony finger, Losinj has been dubbed the island of vitality. It’s not just empty marketing speak: all over the island, there’s an incredible profusion of wild herbs scenting the balmy air and mingling with the fragrance of pine forests. With all those footpaths curving around the island’s headlands under the shade of pine trees, the first instinct is to take to two feet or two wheels and explore at your own pace.

“This sleepy island and its neighbours – Krk, Cres and Rab – have been welcoming tourists in their own quiet way since the 19th century.”

Add a dizzying number of beaches to the mix and holidaymakers soon discover why the Austrian-Hungarian emperor Franz-Joseph became so attached to the place back in the 19th century.

Clients who prefer sandy beaches can take the little ferry across to the island of Susak to laze on the sands, but the pebbly and rocky beaches of Losinj have a compelling beauty of their own – not to mention impossibly clear blue-green waters. 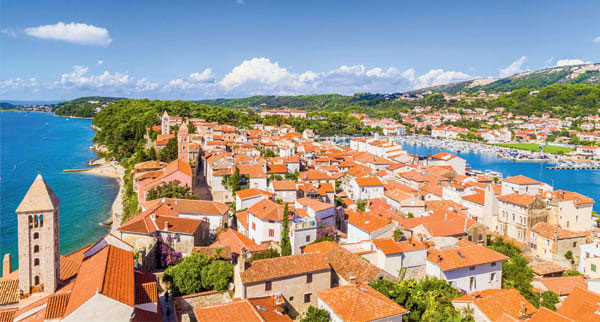 Talk of the town

Much of Losinj life revolves around the two main settlements – Mali Losinj and Veli Losinj. Mali Losinj is the larger of the two (even if its name means ‘little Losinj’), its deep harbour lined with sea captains’ baroque houses in every shade of terracotta and ochre. Restaurant terraces have fine views of the bay and the lively harbourside life, where ferries set off not only to Susak, but also to neighbouring islands.

Holidaymakers looking for a foodie day out can join one of the regular picnic boats that chug around the islands offering freshly grilled fish caught locally. Motorised dinghies and small boats are available to rent, but clients will need a licence if they don’t hire a skipper.

“Clients can rent bicycles easily and make their way along the shaded trails from beach to beach, many of which have water sports.”

There’s even a small museum on the harbour showcasing an ancient Greek statue of Apoxyomenos. They’ve arranged it so cleverly and innovatively that it takes a while to notice that the entire museum – apart from a ground-floor exhibition space – is devoted to a single statue.

The misshapen headlands protruding to the west of Mali Losinj harbour some of the island’s many attractive beaches, especially those in Cikat Bay. With thick forests of Aleppo pines and carpets of wild herbs as an enchanting backdrop, the pebbly beaches tucked into small coves and bays are inviting places to stop for a swim. Clients can rent bicycles easily and make their way along the shaded trails from beach to beach, many of which have water sports, cafes and children’s play areas. It’s also where most of the island’s hotels and campsites are concentrated, including Losinj’s two five-star properties, Hotel Bellevue and Hotel Alhambra. 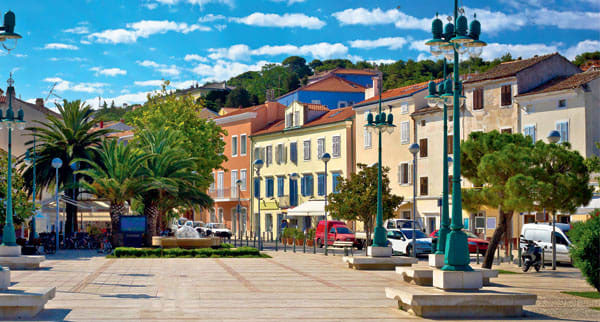 Clients could cycle to Veli Losinj, just a few miles away. Although its name means ‘big Losinj’, it’s shrunk in size over the centuries, leaving a charming little fishing village of colourful cottages and waterside cafes. It’s also the launching point for cruises to spot the colony of about 150 bottlenose dolphins that have made the waters around Losinj their home.

Just outside Mali Losinj is another of the island’s quirky sights. Miomirisni Otocki Vrt translates as the ‘scented garden’ – and that’s precisely what it is. In a sweetly ramshackle space, fragrant herbs and plants smother the paths and lead to wonky tables and chairs dotted about the garden (free admission).

“Spread about the hillside are tables and herb-scented footpaths, all giving sweeping views of the island and its neighbours.”

To round off the delights of this wonderfully laid-back island, clients should head to the Providenca viewpoint, about halfway between Mali and Veli Losinj. Here, spread about the hillside are tables and herb-scented footpaths, all giving sweeping views of the island and its neighbours. It’s a magical spot to sit with a glass of Istrian wine and a platter of seafood or cured meats, while watching the sun go down over the Adriatic.

Book it: Prestige Holidays offers seven nights’ B&B at Hotel Bellevue from £829 per person, including flights to Pula and car hire.
prestigeholidays.co.uk 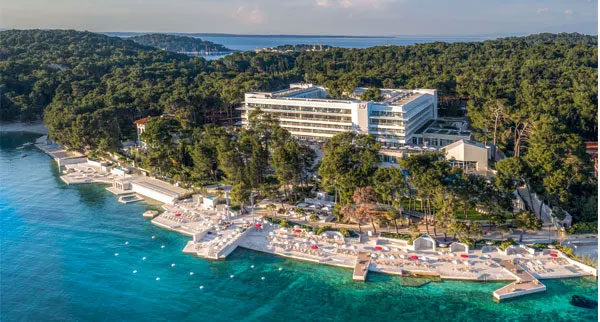 Losinj’s neighbours are worth exploring too, and are all connected via ferry or catamaran.

Cres
Tied with Krk as Croatia’s largest island, long and slender Cres is one of the least populated in the Adriatic, and connected to Losinj via a narrow bridge. A favourite among clients who enjoy walking and nature, Cres is home to a population of rare griffon vultures.

Krk
Thanks to its airport, Krk is the most accessible of the Kvarner islands. Krk Town is the main settlement, with a fascinating blend of Venetian and Roman architecture. Beach lovers head to the southmost point of Baska, where there are 1.25 miles
of sands.

Rab
Tiny Rab has more than 20 sandy beaches – a rarity in pebbly Croatia. Its main village, Rab Town, is enchanting, with glistening medieval marble houses and lanes mixing with ancient ruins that attest to its rich history as part of the Roman, Byzantine, Venetian and Austrian empires.

48 hours in Sibenik, Croatia
Coastal cruising: From Croatia to Cadiz
Easter family holidays on a budget