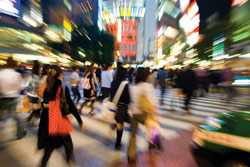 The Japan National Tourism Organization will be launching its campaign, Visit Japan Year 2010 (AS2200), which will showcase activities such as shopping, culture and food.

Other highlights include promoting Okinawa for beach breaks, Kyoto for winter, and Tokyo, Kyoto and Osaka for their wealth of Michelin-starred restaurants. At 5pm on Monday November 9, sake and umeshu plum wine and awamori will be served with sushi and Japanese snacks.

Indochina will be a big presence in the Asia hall this year. There is a host of Vietnam-based operators, such as Indochina Sails (AS7175), which operates four newly built wooden junks in Halong Bay, Trails of Indochina (AS7200), which offers junk cruising on the Mekong, and tour operator Haivenu (AS7200), which will be running a prize draw for an eight-day luxury tour to Vietnam.

Berlin-based tour operator Lernidee Erlebnisreisen will also be in attendance to promote its 2009/10 expanded cruise programme on the Mekong River (AS5000).

Shoe designer Jimmy Choo OBE, the newly appointed tourism ambassador, will be bringing a touch of glamour to Malaysia Tourism’s stand on Monday and Tuesday November 9 and 10 (AS6400). Agents will have the opportunity to win a pair of custom-made Jimmy Choo shoes on the stand or sing in the karaoke competition on Monday November 9 at 5pm.

In the India section, exhibitors include the luxury rail operator Travel Corporation India (AS3700), and Dusit International Hotels (GV7660), which will be talking about plans to open five hotels and resorts in India by 2013.

Other resorts in attendance include the all-villa Princess d’Annam Resort and Spa in Vietnam (AS7200), which opened last December, and the Harbour Grand on Hong Kong’s waterfront, which opened earlier this year.

In addition, hotel group Amari (AS7250) will be discussing its growth strategy for Thailand and Asia Pacific, the first fruits of which will be a new resort in Hua Hin, Thailand, due for completion in 2011.